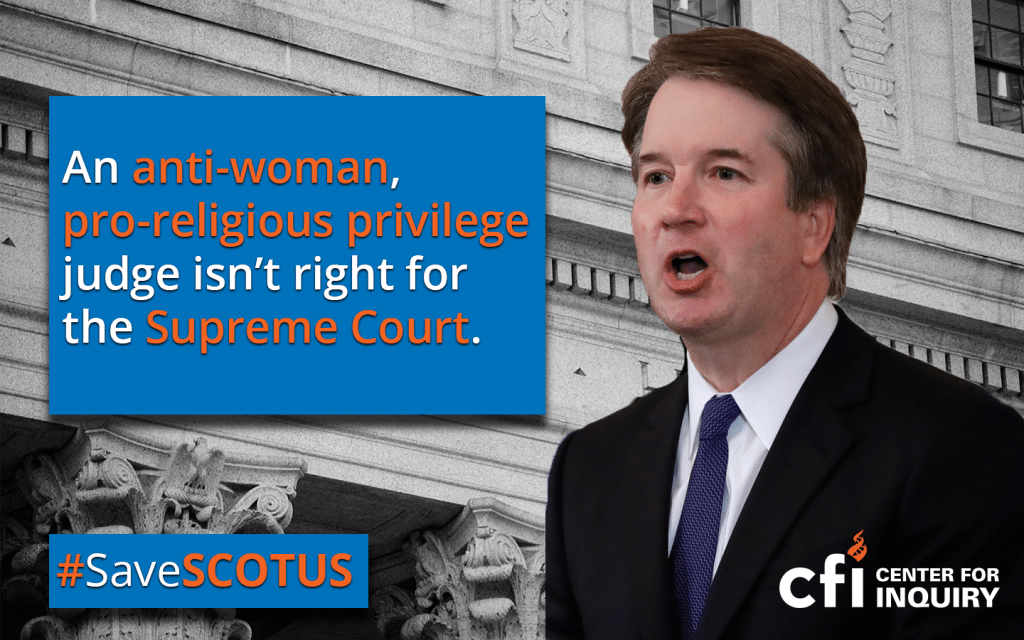 Justice Kennedy’s Supreme Court replacement will affect the rights of Americans for decades to come. On July 9, President Donald Trump nominated Brett Kavanaugh, a judge on the U.S. Court of Appeals for the District of Columbia with a record of political partisanship and known for favoring privileged religious groups over all other Americans. If Judge Kavanaugh’s record is any indication, he will further enable privileged groups who seek to impose their religious views and practices on targeted groups including secularists, atheists, women, LGBTQ individuals, and religious minorities. Judge Kavanaugh is relatively young at 53, and he will likely be on the court for many decades to come. His term would be disastrous for separation of church and state.

Please tell your senators to oppose his nomination.

Here are some of Judge Kavanaugh’s most troubling decisions in favor of religious privilege:

We are facing a dire situation for separation of church and state, but the solution is straightforward: The Senate has a responsibility to reject any candidate for the Supreme Court who does not embrace secular government, uphold religious neutrality, and protect religiously targeted groups. Will you tell your Senators that Judge Kavanaugh is wrong for the Supreme Court?

All you need to do is call (202) 224-3121 with your zip code to be connected to your senators. If you are unable to call, please use our custom webform below to send your senators a written message.

Thank you for supporting the separation of church and state!

Note: the Title field below is required by the United States government database that sorts these messages and directs them to the correct representative's office. We unfortunately cannot customize the honorifics available or make the field optional, as that would cause the database to reject the message. We recommend choosing Dr. for those who use gender-neutral honorifics.

Zip Codes: Sections of many zip codes appear in multiple legislative districts. To accurately find your legislators the system often requires a full Zip+4 Code. If you do not know your +4, we recommend using the US Postal Service website.

Keep Naturopathy Out of New York