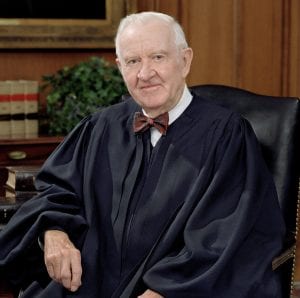 The Center for Inquiry, as should all people of goodwill, mourns the July 16th passing of retired United States Supreme Court Justice, John Paul Stevens, at the age of 99. He was appointed to the Court by Republican President Ford in 1975, upon the retirement of Justice William O. Douglas. Back then, the political climate was less antagonistically partisan and the Republican Party had not yet been hijacked by the Religious Right.

Justice Stevens turned out to be one of the most stalwart defenders of the separation of church and state, in terms of what such separation really means. He thoroughly understood that the Framers of the First Amendment intended for believers and nonbelievers to be equal before the law. This is a concept that all too few people really understand. When we nonbelievers, along with fair-minded religious adherents, talk about government neutrality in matters of religion, we mean that no branch of government can favor anyone over anyone else for either accepting or rejecting any type of belief in a deity. It does not discriminate against the religious to demand that they have no greater legal rights than the nonreligious. It only ensures the equality of everyone.

Justice Stevens wrote the majority opinion in the 1985 case of Wallace v. Jaffree, in which the Court struck down Alabama’s moment of silence statute, recognizing it as a subterfuge to sneak organized prayer back into the public schools. He wrote that the aim of “forestalling intolerance” equally extends to protecting “the disbeliever and the uncertain.” In the 1997 case of City of Boerne v. Flores, in which the Court struck down the Religious Freedom Restoration Acts, RFRA as applied to the states, he wrote in a concurring opinion that this entire law is unconstitutional because it only allows religious claimants the right to avoid complying with laws of otherwise universal applicability. Justice Stevens said that a law is unconstitutional if it provides the religious “with a legal weapon that no atheist or agnostic can obtain.”

Particularly now that Trump has solidified a first-time-ever religious right-wing majority on the Court, we can only hope to see the day when a future president will once again appoint justices like John Paul Stevens.