I don’t know what to say about the shootings here. Nothing I could put here would be terribly meaningful or useful. Just to keep things in the Heresy wheelhouse, I will note that Cloudflare, a network provider, is giving the forum 8chan the boot, as it has been a home for content such as the El Paso shooter’s manifesto:

8chan is among the more than 19 million Internet properties that use Cloudflare’s service. We just sent notice that we are terminating 8chan as a customer effective at midnight tonight Pacific Time. The rationale is simple: they have proven themselves to be lawless and that lawlessness has caused multiple tragic deaths. Even if 8chan may not have violated the letter of the law in refusing to moderate their hate-filled community, they have created an environment that revels in violating its spirit.

David Smith at The Guardian looks at why there are so few avowed nonbelievers in American politics, and naturally checks with the only openly atheistic Member of Congress, Rep. Jarred Huffman:

So what would happen if a 2020 candidate came out as a non-believer?

… “I have many fellow travellers, very few publicly. I think there’s still fear of this conventional wisdom that being an atheist or agnostic or a non-believer is somehow the worst possible thing in politics. My experience has been that that’s not the case, but how you do it matters.”

Saudi Arabian women are now allowed to apply for passports and travel freely, and file other government documents, without the consent of a male, which is about as low a bar for “progress” as one can imagine. The AP reports:

Women are now also allowed to be legal guardians of their children, a right previously held only by men. Still in place, however, are rules that require male consent for a woman to leave prison, exit a domestic abuse shelter or marry. Women, unlike men, still cannot pass on citizenship to their children and cannot provide consent for their children to marry.

A recent study shows that on social media, pseudoscience and conspiracy theories are not the exception, but the rule. Santosh Vijaykumar at The Conversation writes:

Marianne Williamson loses more of that sheen of “benignly quirky outsider” every day (besides, that’s my shtick). Alex Henderson at AlterNet notes her fluffy attitude toward 9/11 trutherism:

When Williamson appeared on [truther Kevin] Barrett’s radio show seven years ago, he asserted that he had “a bit of a chip on my shoulder” because he had been ostracized in academia for his involvement in the 9/11 truther movement. Barrett told his guest that he had “lost two jobs” in academia and that if he couldn’t share his 9/11 theories without risking his job, “then we’re pretty fascist.”

Williamson responded, “Yeah, I couldn’t agree with you more.” And she added, “To have questions about 9/11, to me, is no different than having questions about the Warren Commission. And I don’t believe in the single bullet theory of the Kennedy assassination either.”

David Gorski responds to Williamson’s assertions that kids born since the 1980s are “the sickest generation”:

My conclusion is that it’s highly unlikely that they are. At the very minimum, ironically enough, vaccines have prevented many sources of illness, including chronic illness. For example, polio is no longer paralyzing thousands of children every year. While it is true that there has been a rise in the prevalence of certain high prevalence chronic conditions, many of them are well-managed and it’s not clear for every illness or chronic condition how much of the observed increase in prevalence is due to increased diagnosis of previously undiagnosed conditions versus an actual increase in prevalence. More importantly, estimates of chronic illness in childhood are highly dependent on the operational definition of chronic illness. …

… Finally, I’ll conclude by saying that we don’t need another President who spouts dubious statistics from conspiracy mongering websites.

Besides, everyone knows that if you were from the 1980s, you’re not sick, you be illin’.

At CNN, Tamara Qiblawi reports on how the Lebanese band Mashrou’ Leila has become a target of religious conservatives over their “blasphemous” songs:

Their bold lyrics about queer romance, political corruption and religious sectarianism sung to the Balkan-influenced tunes and Sinno’s soaring vocals.

… Right-wing Lebanese Christian activists, who accused the band of “blasphemy,” vowed to stop the performance “with force,” unleashing a virulent social media campaign against the group.

Highlighting lyrics that they interpreted as “devil worship,” some activists invoked the crusades. Another Facebook group called the “Soldiers of the Lord” tried to rally priests and politicians to join their bid to stop the concert.

Responding to that horrid photo of three grinning young white men posing with guns in front of a sign marking the site Emmett Till’s body was recovered, Jemar Tisby wonders what the hell they’re being taught in their church, if anything:

…churches may talk about race, but in unhelpful ways. Oftentimes, they try to do so in a “colorblind” way by emphasizing commonality and by minimizing or ignoring differences.

They claim they “don’t see color” and that all believers are brothers and sisters in Christ regardless of their race or ethnicity. These teachings become problematic when the varied life experiences, racial hardships, and history of black people is blotted out in a blob of contrived sameness. Unity does not mean uniformity.

…it it is true that other superstitions about body parts can be found among early European and African Americans, as well as in Europe and Africa. Benjamin Radford, deputy editor of Skeptical Inquirer, suggest the rabbit’s foot could be connected to a European good luck charm called the Hand of Glory.

“The Hand of Glory was a hand cut from a hanged man,” he says. In medieval Europe, authorities sometimes left hanged men’s bodies out in public to warn others against committing crimes; “but oftentimes, people would go and cut off one of the hands…usually the left one, and pickle it.”

At the CFI blog, John Murdoch looks at all that’s wrong about the U.S.’s official woo agency, the National Center for Complementary and Integrative Health:

There is no legitimate function that the NCCIH can serve that could not be better carried out by other existing organizations within the NIH umbrella. Fundamentally, a public agency, the National Institutes of Health, ostensibly committed to rigorous science-based medical research as a means of advancement in medical practice and clinical treatments, should not be considering well over $100 million per year in grants to a sub-agency whose conceptual underpinnings are on roughly the same factual level as blood group diets

James Haught declares the biggest story of the 21st century so far is, well, us:

Sociologists are stunned by the abrupt downfall of supernatural faith in Western civilization. The swift cultural transformation gained recognition in the 1990s and then accelerated.

The Sioux Falls Argus Leader reports on how South Dakota public schools are getting set for students to see all those “In God We Trust” displays now required by state law. For example, in Sioux Falls itself:

Some superintendents said they expect some pushback on the displays when students return to school while others aren’t expecting much reaction — mostly because residents understand that it’s being mandated by the state.

Sioux Falls’ laminated posters include facts about the country, state and city to invoke that “we’re all together in this,” Superintendent Brian Maher said. Residents are aware it’s a state law, but the district’s focus on inclusiveness on its posters is why he doesn’t believe there’ll be much reaction. 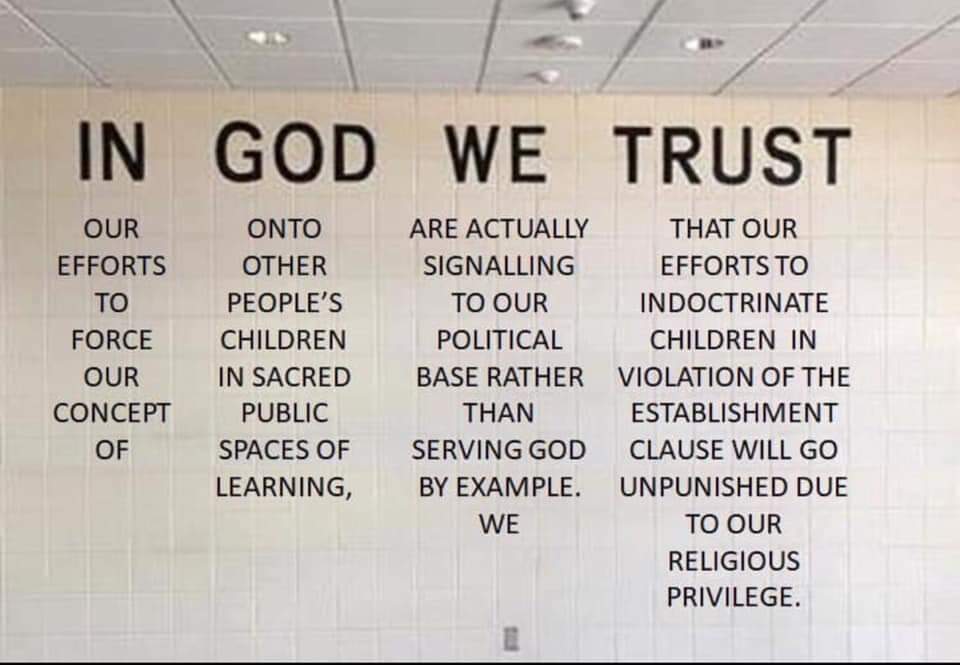 Trust in God was of no help to the human beings who were owned, enslaved, and resold for profit by Catholic nuns in Georgetown in the 1800s. Hannah Natanson at WaPo has a gut-wrenching report.

Rachel L. Swarns at the New York Times delves into the story:

“Nothing else to do than to dispose of the family of Negroes,” Mother Agnes Brent, the convent’s superior, wrote in 1821 as she approved the sale of a couple and their two young children. The enslaved woman was just days away from giving birth to her third child.

Nuns disposing of black families? I have been poring over 19th-century church records for several years now and such casual cruelty from leaders of the faith still takes my breath away. I am a black journalist and a black Catholic. Yet I grew up knowing nothing about the nuns who bought and sold human beings.

Flat-Earthers? Pish posh. Now we need to deal with Flat-Galaxy….-ers. Because now we know that the Milky Way isn’t a flat frisbee, but a sort of warped spiral (metaphor alert).

One Tiffany FitzHenry is here to tell us that “the music scale” we’re familiar with in music theory was altered in the previous century by the Rockefellers or Rothschilds in order to keep people from hearing the “natural frequency” of music as originally created by God. Oh, do go on:

There is a frequency that is sort of the God frequency and then there is a frequency that is just sort of off from that. Our scale of modern music [is] off from the real resonance, it’s just a scale down. We don’t realize it, but all of our music is tainted in this way and sound has a powerful influence, a powerful effect on our bodies, on our minds. We’re 75 percent water, and so when something reverberates through you, it changes your DNA.

I’m quitting my piano lessons. I didn’t realize they were a lie.

Any Hex, Any Spell, Any Witchcraft, Any Spirit of Control, Any Jezebel

Any Hex, Any Spell, Any Witchcraft, Any Spirit of Control, Any Jezebel