Update: Though CFI believes, based on his past statements and on the phrasing of his answer to Senator Cruz, that Judge Kavanaugh probably does hold an unscientific position on birth control and abortifacients, the evidence is insufficient to make this claim with 100 percent certainty.

Although Judge Kavanaugh’s answer doesn’t allow us to determine with certainty what he believes about the science of contraception, it signaled his clear willingness to codify religious discrimination by reinterpreting existing religious freedom laws. Kavanaugh’s dissent in Priests for Life prioritized religious fiction over scientific fact in order to protect a claim to religious privilege. CFI continues to oppose Judge Kavanaugh’s confirmation to the Supreme Court. 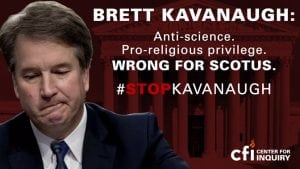 When science stands between religious privilege and the law, Judge Brett Kavanaugh will parrot antiscientific propaganda to aid the religious Right in steamrolling the rights of individual Americans, especially women. It’s just one more reason to tell your senators to stop his confirmation now.

Explaining his dissent in Priests for Life v. HHS, in which Kavanaugh found it an undue burden for a religious organization to complete a two-page form expressing their objection to providing employees with contraceptive coverage, Kavanaugh called contraceptives “abortion-inducing drugs,” a term that was immediately condemned by science organizations, medical associations, and reproductive rights advocacy groups:

To call contraceptives “abortion-inducing drugs” is to tell a lie. According to the Guttmacher Institute, religious extremists deliberately misuse this term to conflate contraception with abortion, which then helps them undermine the right of women to access either form of health care. Extremist religious Right groups such as the U.S. Conference of Catholic Bishops, the Heritage Foundation, Susan B. Anthony List, and Americans United for Life repeat exactly the same lie that Kavanaugh did.

The evidence shows that contraceptives, including emergency contraceptives such as Plan B, cannot end a pregnancy once it has begun. The scientific definition of pregnancy (which was presented to the Supreme Court in an October 2013 amicus brief led by Physicians for Reproductive Health and the American College of Obstetricians and Gynecologists [ACOG]), stipulates that pregnancy begins after a fertilized egg is implanted in the uterus wall, which can happen up to two weeks after intercourse.

FDA-approved contraceptives work by preventing fertilization or implantation of an egg in the lining of the uterus. This is equally true of emergency contraceptives that, although they are taken after sexual intercourse, have their effect before pregnancy is established and cannot remove the implantation of a fertilized egg. As ACOG points out:

Abortifacient has a precise meaning in the medical and scientific community and it refers to the termination of a pregnancy. Contraceptives that prevent fertilization from occurring, or even prevent implantation, are simply not abortifacients regardless of an individual’s personal or religious beliefs or mores.

The notion that pregnancy begins in a prior instance—say, at fertilization—is nonsense because research shows that no more than 40 percent of fertilized eggs ever become implanted.

Implantation is also the legal standard for pregnancy used by federal agencies, including the Department of Health and Human Services, as well as all major U.S. medical organizations.

Either Kavanaugh understood all this, in which case he was telling an egregious lie about the circumstances of the Priests for Life decision, or he did not understand it, in which case he made a decision that affected the health, safety, and freedom of hundreds of millions of Americans without first learning the facts. Either way, Kavanaugh’s testimony showed that he is utterly callous about the right of women to safe and effective health care and to privacy in their health care decisions, and that he will privilege religious antiscience over these concerns.

Kavanaugh’s affinity for religious privilege shone through in other moments too. Senator Mazie Hirono (D-HI) highlighted his inconsistency on what constitutes an “undue burden.” In contrast to his dissent in Priests for Life, his dissent in Garza v. Hargan claimed that forcing a detained, undocumented 17-year old girl to continue an unwanted pregnancy did not burden her right to choose an abortion. As the Congressional Freethought Caucus said in their September 6 letter to the Judiciary Committee, “For Kavanaugh, filling out a form burdens religion, but forcing a child to give birth is not a burden.”

At another point, Kavanaugh told Senator John Cornyn (R-TX) that the Supreme Court’s decision in Santa Fe v. Doe was incorrectly decided because it was “hostile toward religion.” Santa Fe is the case in which the Court decided that the Santa Fe Independent School District unconstitutionally privileged religion by allowing students to deliver prayers “on school property, at school-sponsored events, over the school’s public address system, by a speaker representing the student body, under the supervision of school faculty, and pursuant to a school policy that explicitly and implicitly encourages public prayer.”

And, of course, documents released last week by Senator Cory Booker (D-NJ) confirm two other things: First, that Kavanaugh does not view Roe v. Wade as settled law, contrary to a claim from Senator Susan Collins (R-ME) that he told her so in a private meeting. Second, they confirm that he would force the government to directly fund religious organizations and their programs, utterly disregarding the central point of the Constitution’s Establishment Clause.

We already knew that Judge Kavanaugh was pro-religious privilege. Now we see that he added antiscience to the list of reasons he is wrong for the Supreme Court. Please tell your Senators to oppose Kavanaugh’s confirmation by completing our action alert.