In October 2018 Dorie Stevenson of Milton, Ontario, who goes by the name Madeena, was arrested by police and formally charged with witchcraft. Stevenson was not arrested for practicing magic per se; charges were laid under Section 365 of Canada’s Criminal Code, “Witchcraft—Fortune Telling,” as a form of fraud: “Every one who pretends to practise or to use any kind of witchcraft, sorcery, enchantment or conjuration; undertakes, for a consideration, to tell fortunes; or pretends from his skill in or knowledge of an occult or crafty science to discover where or in what manner anything that is supposed to have been stolen or lost may be found.” Other charges included fraud and extortion.

Psychics getting busted for fraud is not uncommon, but them being prosecuted under a law with the word “witchcraft” is, and shortly before Halloween many in the news media had a field day with it. The archaic nature of the phrasing of such statutes spurred spurious and ill-informed news headlines and articles, such as in The Washington Post (“In Canada, Pretending to Be a Witch is a Punishable Offense”) and BBC News (“Canada’s Last Witch Trials: Women Accused of Fake Witchcraft”). The articles misleadingly framed the issue as about freedom of religious beliefs and persecution of pagan witches, not using psychic powers as a pretense for theft. 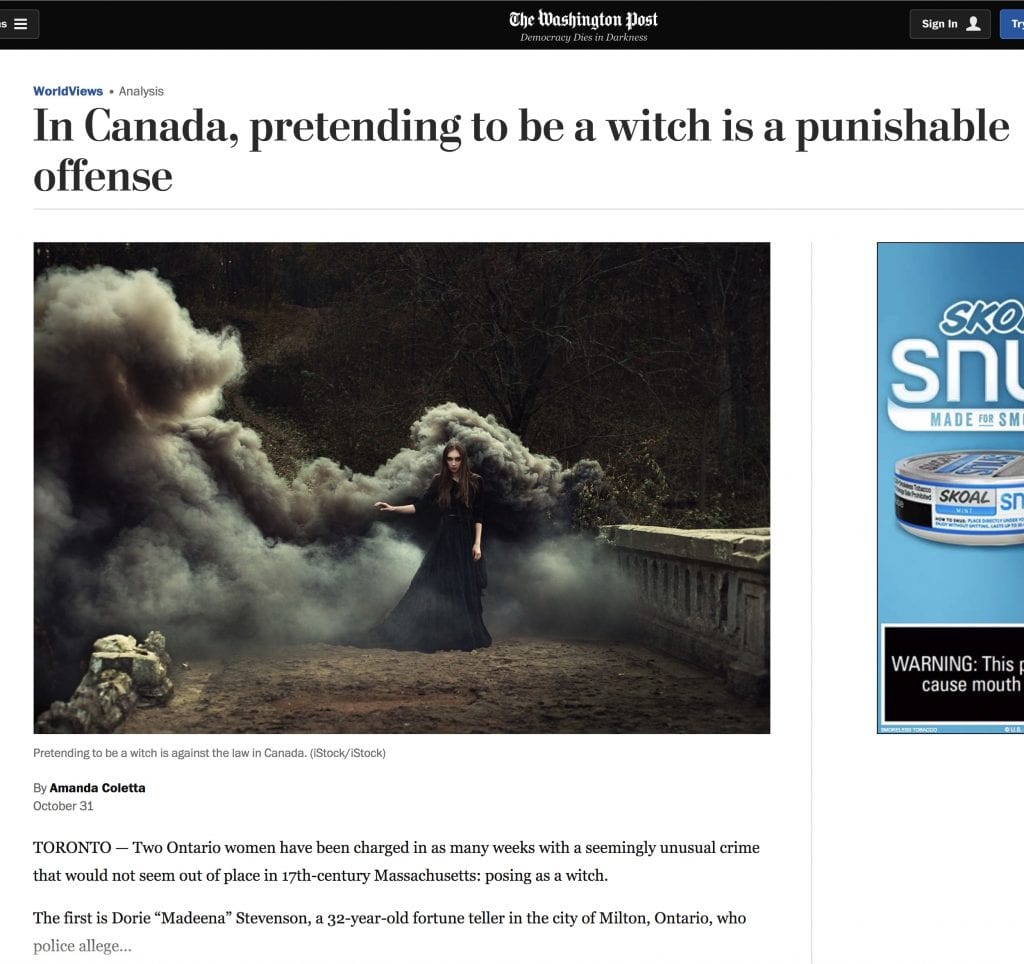 The BBC piece, which reported that “The charges could lead to Canada’s last witch trials, as the section of the law banning pretending to practise witchcraft will soon be repealed,” is especially egregious and historically ignorant; in the real witch trials victims were accused of real—not fake—witchcraft. The phrasing also raised flags among some lawmakers in 2017 who referred to them as among obsolete “zombie laws,” though others noted that despite their dated terminology they do help protect Canadian citizens. The code was repealed by the Canadian Parliament on December 13, 2018 under Bill C-51. 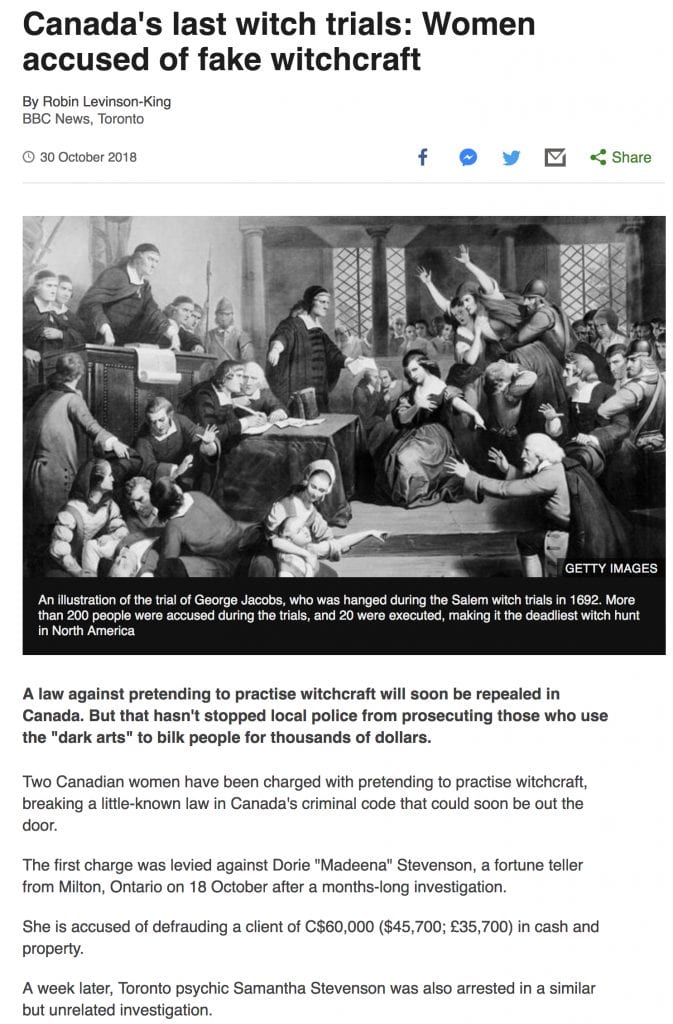 The arrest was the culmination of a five-month investigation involving several victims, some of whom claimed they had been bilked out of tens of thousands of dollars. Stevenson’s website states without irony that “As an experienced and gifted Milton psychic reader I am aware that you could have had false hopes and promises made to you that has led you into a deeper path of confusion… As a trusted psychic reader I provide guidance and suggest solutions in the following matters,” and one of her areas of expertise is “Court Cases.” 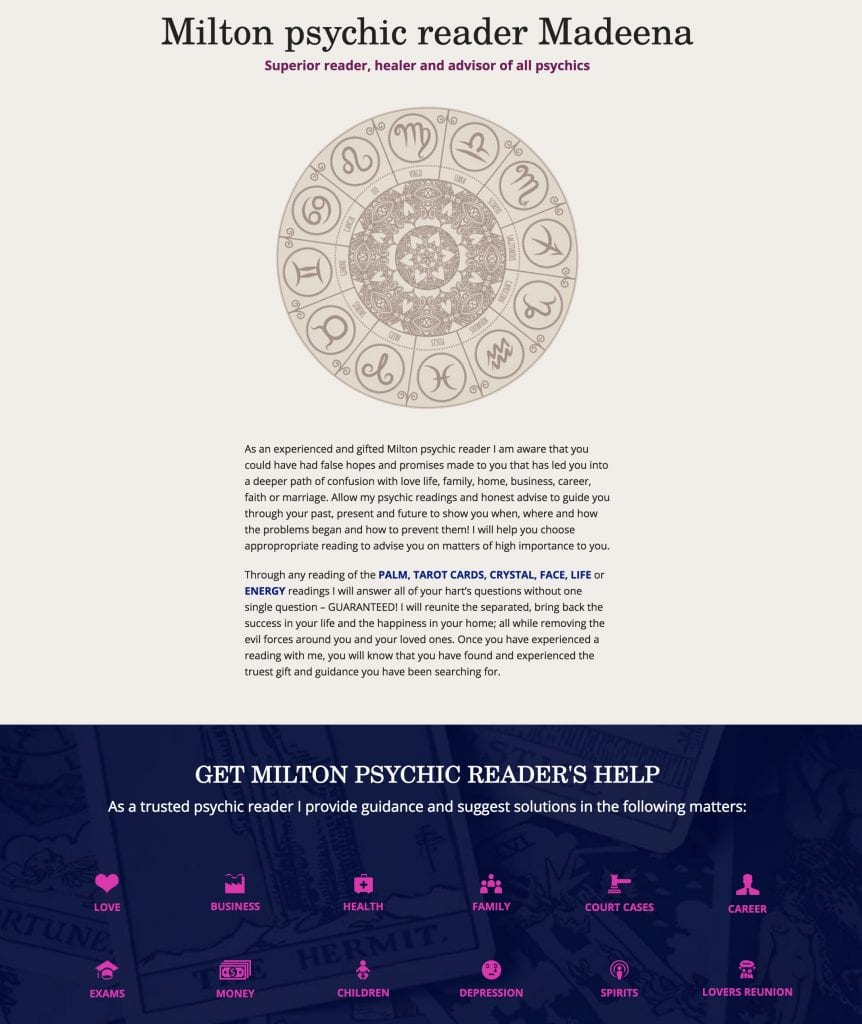