It’s April Fools’ Day and I hate it.

So does Mark Serrels at CNet:

I don’t think it’s a stretch to say that, in a universe where outlandish garbage occurs every single day, April Fools’ should be cast into the sun to melt in agony for all eternity. In 2019, in this universe, April Fools’ is no longer tenable and should be cancelled. With immediate effect. … In a world that’s already terrible, over-branded and beyond parody, April Fools’ is a step too far. It’s an anachronism. A joke out of time.

The deposition of Alex Jones was released, complete with video, in the lawsuit waged by Sandy Hook parents over Jones’s perpetuation of the false claim that the 2012 school massacre there had been a hoax. He compared his many utterances to “pages in a blender,” and thus impossible to recall after the fact. And really, the real victim of all of this is Alex Jones:

Well, sometimes people claim they’ve been hurt when they haven’t been. So you have to look at the agenda behind things. …

And I, myself, have almost had like a form of psychosis back in the past where I basically thought everything was staged, even though I’m now learning a lot of times things aren’t staged. …

… I’m just saying that the trauma of the media and the corporations lying so much, then everything begins ― you don’t trust anything anymore, kind of like a child whose parents lie to them over and over again, well, pretty soon they don’t know what reality is. So long before these lawsuits I said that in the past I thought everything was a conspiracy and I would kind of get into that mass group think of the communities that were out there saying that. And so now I see that it’s more in the middle. All right? So that’s where I stand.

Elizabeth Williamson at NYT looks at the symbiotic loop of cruelty shared by Jones and Wolfgang Halbig, a former Florida school official who harassed Sandy Hook families, obsessed with proving the shooting was a hoax.

Our letter to Tennessee authorities about the Memphis charter schools signing on to a Catholic morality clause has gotten the attention of the local media, with coverage in the Commercial Appeal and on WMC 5 News.

At Georgetown University’s The Hoya, CFI’s Benjamin Radford is tapped for a skeptical perspective on psychics and their position in Georgetown:

There is this appeal to authority. So you can look at the position that psychics have in society as similar to a priest, or a rabbi or a witch doctor. Someone who is claiming to be a conduit to another world. In some cases it’s fine; in other cases it can be easily abused. It’s in some cases, the courses of people’s lives are being changed based upon information of psychics.

San Antonio’s city council decided that it didn’t want Chick-fil-A doing business in the city’s airport, so the state attorney general is “investigating” whether that’s a violation of the franchise’s religious liberty. Corporations are people, and fast food restaurants have religious beliefs. By the way, this attorney general, Ken Paxton, is a real genius. He actually wrote this in an official capacity and sent it to actual government officials:

The Constitution’s protection of religious liberty is somehow even better than Chick-fil-A’s chicken.

The pope declares that Vatican City public officials will now be obligated to report any information they have about minors or other “vulnerable persons” they suspect may be the victims of abuse. Howard Friedman notes:

Meanwhile, a judge in a Pennsylvania court vacates a youth minister’s convictions for sexual abuse of minors (reluctantly, he says) because the statute of limitations had expired in the year 2000.

The IRS is requiring churches and other nonprofits to pay taxes on certain employee benefits such as parking and transportation, and HOLY HELL THIS OUTRAGE WILL NOT STAND! Thank goodness the Southern Baptists are here to save the day. Russell Moore says to Congress:

The freedom of the church is too important of an issue to let unmotivated elected officials threaten it. Uncle Sam is welcome in our churches. But we don’t work for him. And Congress should end this deeply un-American tax on churches immediately.

I HOPE IT’S NOT TOO LATE TO SAVE RELIGIOUS FREEDOM FROM PARKING TAXES.

Nebraska’s state Democratic Party forms a new caucus, the Nebraska Secular Democrats. Nebraska is where State Senator Ernie Chambers was, for a while, the only atheist elected state official in the country. He’s still there, but now along with fellow nonbeliever Senator Megan Hunt.

In the Mirror Universe, aka Georgia, Doyle Kelley, the father of a state representative, delivered an opening prayer to the legislature that more or less threatened 7 million people with eternal torment and damnation:

And you want to hear it in Baptist terms? 7 million people that are lost are dying and on their way to Hell. That’s what that means.

NYT’s Edward Wong looks at the disturbingly overt Christian posturing of Secretary of State Mike Pompeo.

…whatever the proposal’s defenders may claim, their denial is shameless obfuscation. This debate has been going on for some years, and it always comes down and back to Muslim women. … Third, this plays into the hands of the jihadists, who insist that Muslims will never be accepted in non-Muslim society, that the west is fundamentally Islamophobic, and that no Muslim should cooperate with non-Muslim governments.

In the Tallahassee Democrat, Tony Garcia writes in opposition to Florida’s proposed “Biblical study” bill that would put Bible classes into public schools:

We oppose … the state taking a specific and pointed direction to promote one religion over all others. We see the bill’s aim as just that: The unfettered promotion of Christianity in our public schools to students who could be bullied and easily intimidated into accepting as “truths” ideas that should be debated, compared and contrasted.

The HHS is giving a huge grant to “crisis pregnancy centers,” which are anti-abortion Christian propaganda and coercion operations dressed up like health clinics.

A joint report from France’s Academy of Medicine and the Academy of Pharmacy says the country’s health care system should not be paying for homeopathy, nor should any medical facilities be bestowing degrees in homeopathy.

Google pulls a gay-conversion therapy app from the Play Store that got them negative attention from the Human Rights Campaign.

Maryn McKenna at Wired tallies up the costs of the anti-vaxx movement in dollars:

Researchers at the CDC estimated that handling 107 cases of measles that occurred in 2011 cost state and local health departments between $2.7 million and $5.3 million. In 2014, 42 people came down with the disease after passing through Disneyland at the same time as a never-identified person with measles—and subsequently infected 90 additional people in California, 14 more in other states, and a further 159 people in Canada. The cost of controlling the outbreak, just in California, totaled almost $4 million. And in 2017, a five-month outbreak of measles in Minnesota infected 79 people and cost the state $2.3 million.

At The Atlantic, Sniggha Poonam and Samarth Bansal report on the “unprecedented nature and scale” of misinformation in Indian electoral politics. Sounds familiar.

The first is this notion that it’s somehow in our interests for the recommendations to shift people in this direction because it boosts watch time or what have you. I can say categorically that’s not the way that our recommendation systems are designed. Watch time is one signal that they use, but they use a number of other engagement and satisfaction signals from the user. It is not the case that “extreme” content drives a higher version of engagement or watch time than content of other types.

At TED’s Ideas blog, Daniella Balarezo and Daryl Chen give tips on how to consume news “like a scientist”:

Scientists labor under a burden of proof. They must conduct experiments and collect data under controlled conditions to arrive at their conclusions — and be ready to defend their findings with facts, not emotions.

A tweet from Dr. Jennifer Gunter (who you can hear on a recent episode of Point of Inquiry): 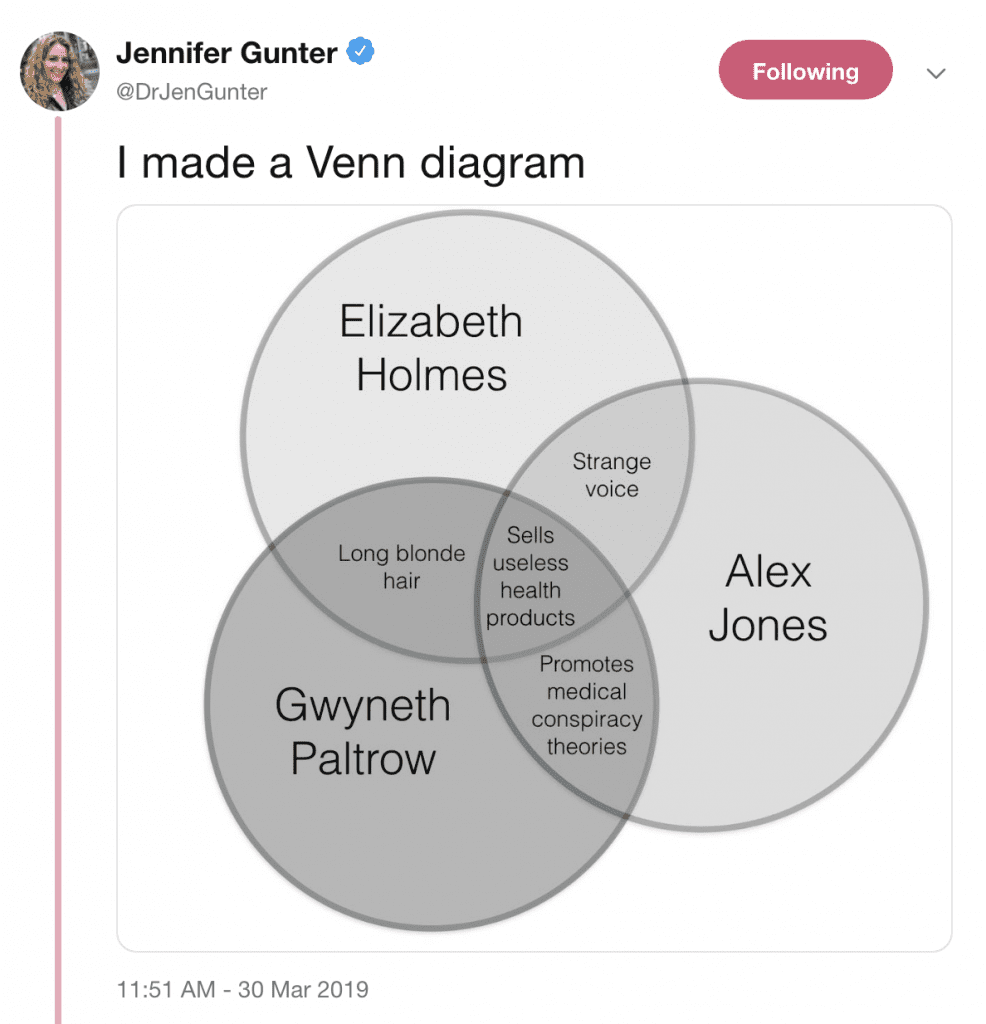