There’s a new drug panic in town, and it’s not crack or opioids. It’s catnip.

Well, it’s called “Catnip Cocktail,” and it actually contains no catnip. It contains a non-FDA-approved blend of a variety of chemicals including caffeine and something called 1,4-BD, which allegedly metabolizes into sedative akin to RHB, a “date-rape” drug. 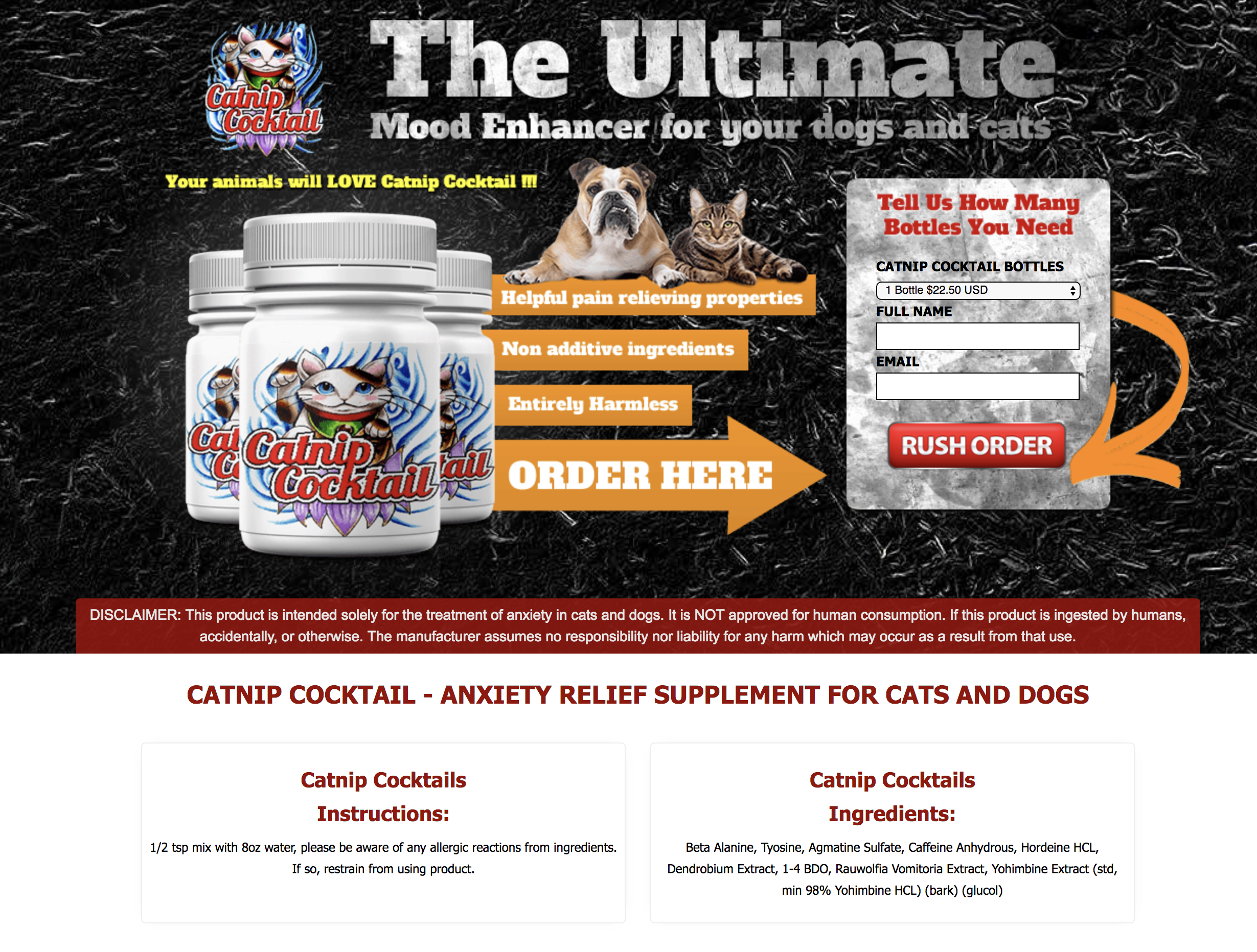 Marketed as “The Ultimate Mood Enhancer for Your Dogs and Cats,” it is touted somewhat ambiguously as having “Helpful pain relieving properties,” with “Non additive [sic] ingredients” (it presumably meant to say “non-addictive”). Curiously, the website does not offer testimonials of effectiveness, either from licensed veterinarians or from dogs and cats themselves.

It’s not clear who manufactures Catnip Cocktail, but any rate for only $22.50 per bottle plus shipping you too can get your hands on the hottest new recreational drug, or pet mood stabilizer, or whatever it is.

According to the San Jose Mercury News, Catnip Cocktail has been linked in some way to “several incidents where police in the northern New Jersey suburb encountered alarming behavior from people who appeared to be under the influence of the little-known drug. On Thursday, the Fairfield Police Department announced that they had raided Nutrition Zone and seized 61 bottles of Catnip Cocktail, along with other contraband. ‘This is a very dangerous product and it appears its improper use is on the rise,’ Fairfield Police Chief Anthony Manna said in a statement. ‘In executing today’s search warrant, the Fairfield Police Department has sent a clear message that we will do whatever we can to assure that Catnip Cocktail does not become the next drug fad.’”

It may be too late: The Business Insider offered an alarmist headline warning that “A dangerous drug called Catnip Cocktail is on the rise—and it’s driving people mad.”

The way this story is unfolding is reminiscent of previous “new” drug scares. In 2007 news media covered bogus news stories such as jenkem (a hallucinogenic inhalant drug made from fermented feces that, according to alarmist news stories spread by trolls, was widely used among schoolkids). And of course there’s the debunked myth of vodka-soaked tampons (reported by otherwise reputable news media including ABC News) being used by college women trying to get drunk quickly. Then there’s the “eyeball-licking fad” of 2013, a “dangerous new trend” among Japanese schoolchildren supposedly licking each other’s eyeballs and in the process supposedly spreading the highly contagious disease pink eye. Kids today.

In 2012 Florida man Rudy Eugene was accused of attacking a homeless man and biting his victim’s face and ripping his flesh until police shot him. Rumors and news stories claimed that Eugene was high at the time on a narcotic called “bath salts” (which is not a single, specific drug but instead a group of drugs containing mephedrone). This led to wild stories about the dangers of “bath salts,” including the suggestion that it would turn users into flesh-eating zombies—but toxicology tests later revealed that the only drug in his system at the time was marijuana. He may or may not have used bath salts before, but he wasn’t on them at the time.

We see this same pattern in the current “Catnip Cocktail” stories: A handful of people who were found to be acting strangely, allegedly while in possession of vials of the animal sedative, but where there’s little or no evidence (in the form of toxicology reports, for example) that they were under the influence of them.

In fact there’s reason to be skeptical of news stories linking the arrested individuals to the drug, because police have claimed that it has effects similar to GHB, which is a depressant. Its effects include drowsiness, loss of muscle control, and slowed heartbeat. But many of the incidents where users are suspected of being on Catnip Cocktail suggest the opposite, that they’re on a stimulant: dancing, euphoria, yelling, erratic behavior, and so on.

Many drug users mix substances, making it difficult or impossible to pharmacologically determine what drug caused what effect. If a person has meth, marijuana, and Catnip Cocktail in their systems, how do we know what effect, if any, the Catnip had? We have a half-dozen or so incidents which may, or may not, be actually linked to “Catnip Cocktail.”

The “Catnip Cocktail” is being cast in news reports as a “dangerous new trend on the rise,” but again it’s hard to know how accurate that is. Without hard data about how many off-label (human) users and usages there are, there’s no way to know. If there have only been a few dozen cases of this illicit usage, then a half-dozen incidents is huge. If on the other hand there have been tens of thousands, or millions, then it’s a much smaller threat. We simply don’t have data, either in terms of drug usage or arrests, to support the claim that this is a dangerous new trend on the rise that the public need be fearful about. A handful of cases with some tangential connection to the drug doesn’t really translate into a “dangerous new fad.”It’s entirely possible that some people are using the drug to get high—or to try to get high, based on its reputed effects (such as those currently being hyped in news stories). In other words even if the drug has little or no real pharmacological effects in humans, there are some people who will try it anyway, looking for a cheap or new high. There are many media-created panics—usually involving some form of rumor and folklore—and Catnip Cocktail seems to be among them.