The Supreme Court decided 5-4 in favor of sectarian legislative prayer today in the case of Greece v. Galloway. In CFI’s official statement, we said, “this ill-reasoned and constitutionally infirm decision sets a dangerous precedent for the blending of religion and government, and sends a message of exclusion to those who do not follow the majoritarian belief system.” Here’s what our president and CEO Ron Lindsay had to say:

Our Constitution demands respect for the beliefs of everyone. Sectarian prayer during public meetings of government bodies unquestionably contradicts that constitutional mandate. Sectarian prayer endorses a particular set of religious beliefs, and excludes not only the nonreligious, but those of differing faiths. It conveys the unmistakable message that those who do not share the majority’s beliefs are second-class citizens.

The majority’s reliance on tradition ignores the enormous changes in American society, and dismisses the concerns of the rapidly growing population of nonbelievers, as well as those who have beliefs that differ from mainstream Christianity. It’s both striking and sad that five of the six Christian justices on the Supreme Court formed the majority. With a Supreme Court that appears hostile to the rights of religious minorities, those of us who believe in a secular government must redouble our legal and advocacy efforts.

Read the entire release here. We were heartened by Justice Hagan’s dissenting opinion (which can be found on page 57 of the Court’s full released opinion), which inspired this post’s image below:

[M]onth in and month out for over a decade, prayers steeped in only one faith, addressed toward members of the public, commenced meetings to discuss local affairs and distribute government benefits. In my view, that practice does not square with the First Amendment’s promise that every citizen, irrespective of her religion, owns an equal share in her government.

If only the rest of the Court shared that view. Please feel free to pass our image on and share it with your friends on Facebook, Twitter, and other networks. 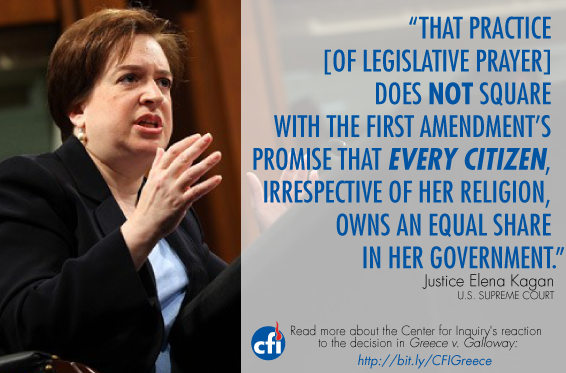