Recent news reports claimed that most people intentionally disrespect transgendered individuals by calling them by something other than their preferred gender pronoun. For example one piece began: “Three in five people internationally report that they would intentionally misgender a transgender person, according to a recent survey. Ipsos found that only two out of five people in Australia, Canada, Great Britain, and the United States said they would call a trans man ‘he’ and a trans woman ‘she,’ instead of misgendering them.” 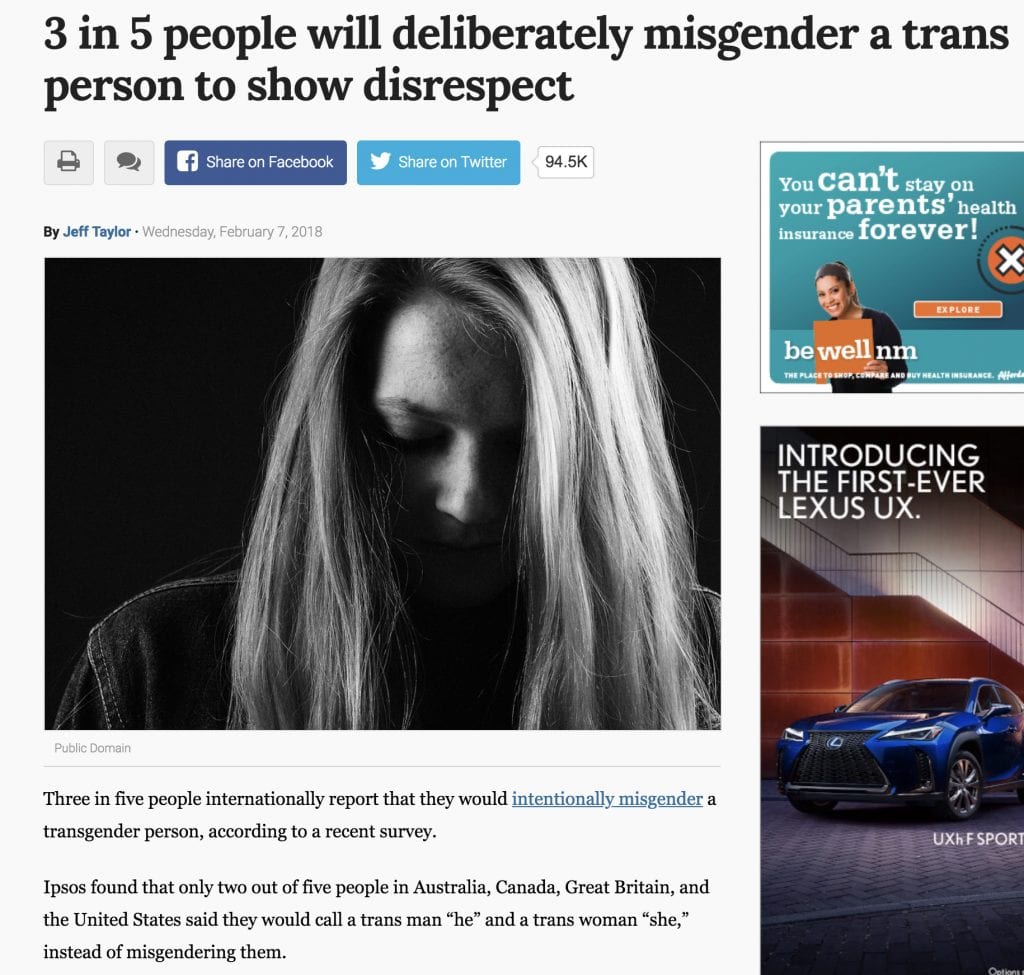 Written by Jeff Taylor for LGBTQ Nation, the article’s headline is “3 in 5 People Will Deliberately Misgender a Trans Person to Show Disrespect.”

For clarification we can go to the original study—the LGTBQ Nation article conspicuously did not provide a link—and look at what the questions and results were. We can begin by noting that the findings of the study bear little relation to the headline. In fact the study says nothing at all about the misgendering being either “deliberate” or intended to “show disrespect.” 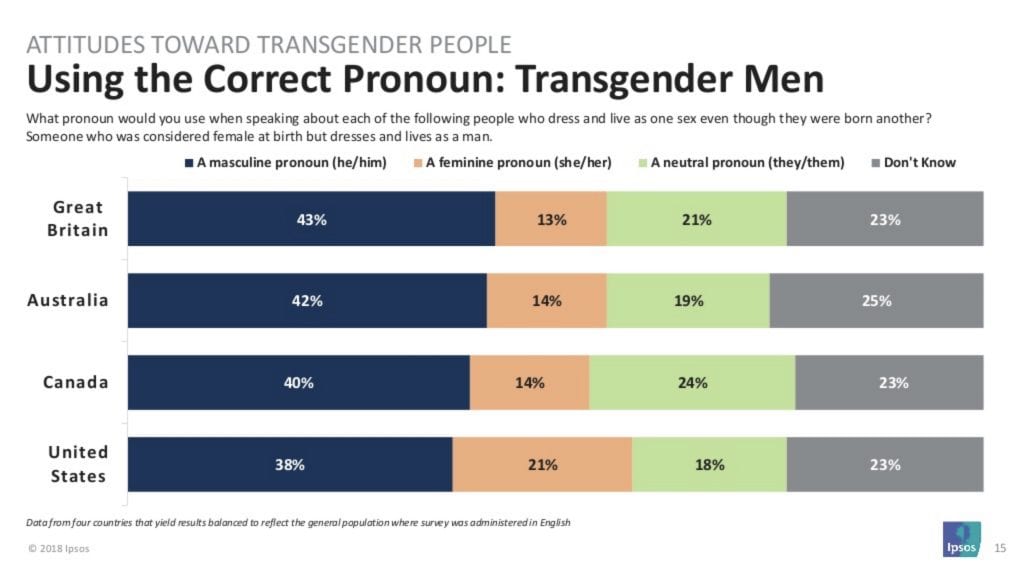 It doesn’t clarify whether any misgendering is intentional. It’s a subtle distinction, but the question doesn’t ask people what pronoun they would use when addressing a transgender person, but instead “when speaking about” him or her. Thus without context we cannot know whether that usage is motivated by intent to show disrespect or simply not knowing what the hypothetical trans person’s preference is. They may misgender people accidentally, or because they are unsure of the person’s preferred address, or out of hostility, or because they simply aren’t aware of the proper etiquette.

We cannot assume, as Taylor seems to, that any response other than the pronoun that aligns with how the persons lives and dresses—such as a neutral pronoun or “I don’t know”—necessarily indicates an attempt to deliberately misgender anyone. To do so is misleading at best and fearmongering at worst. (See Note below on limitations with the study’s methodology and the misleading conclusions it might spawn.)

There is certainly plenty of evidence of social bias against transgendered people, but this headline is not representative of that trend, and in fact it obscures other positive results, such as: 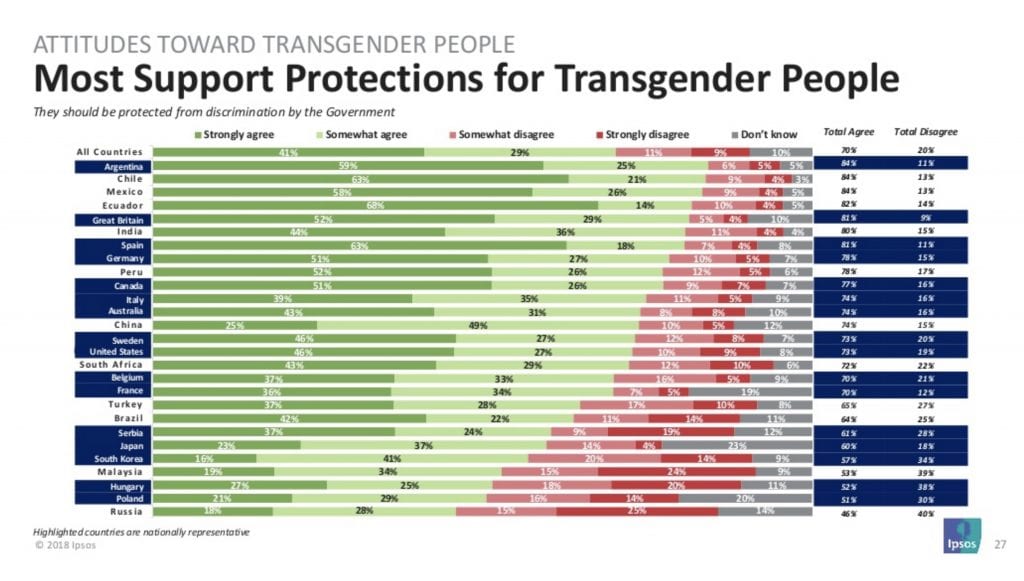 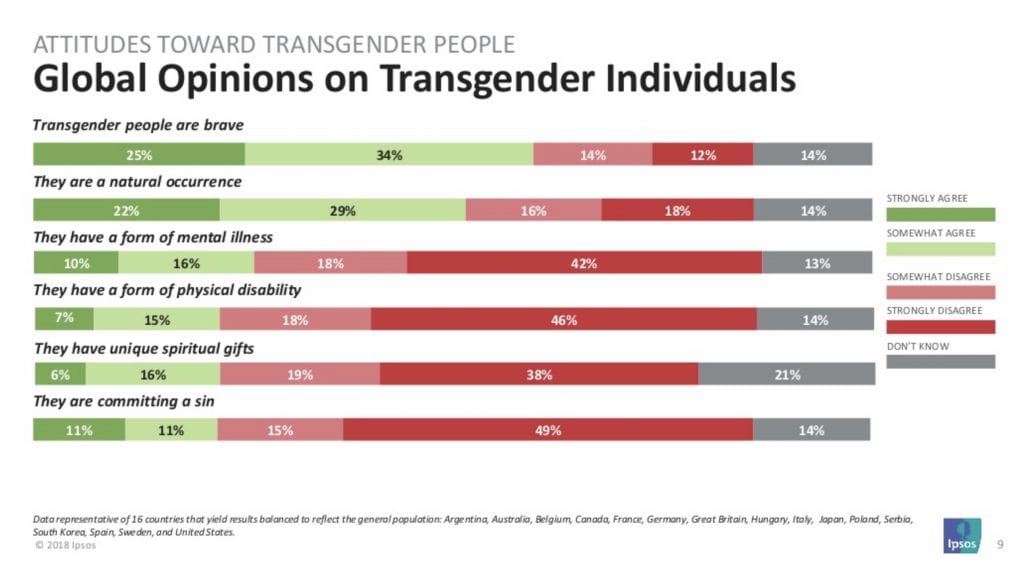 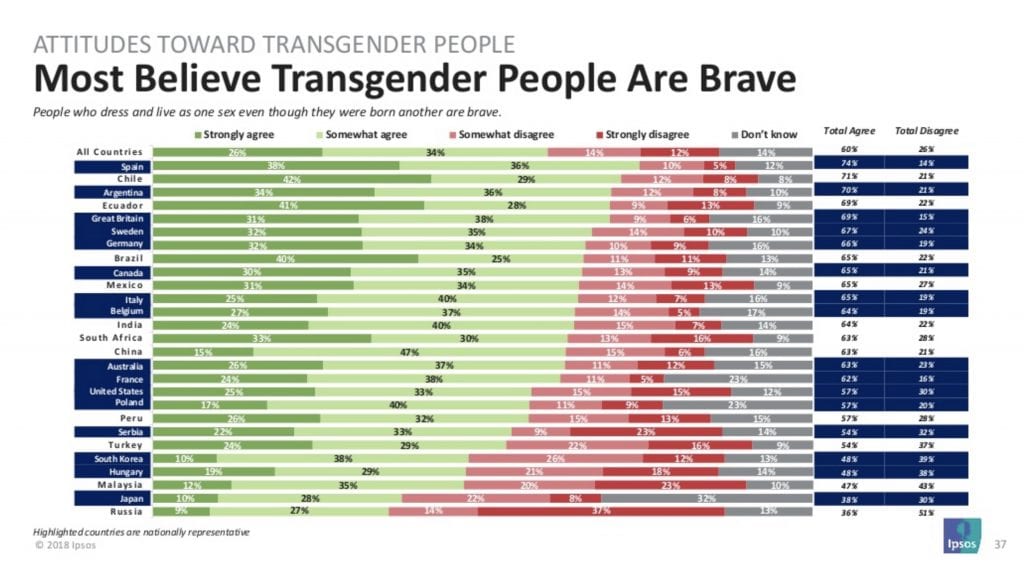 There are other findings as well, and I encourage readers to review the full report; a link is provided above.

Cherry picking studies and polls to find alarming and sensational findings is nothing new, of course. I have researched this sort of misleading poll results in headlines in earlier blogs, and one thing they have in common is the unfortunate tendency to exaggerate the negative. An August 7, 2018, article in the Great Falls Tribune offered a shocking and discouraging statistic in its headline. The piece, by Kristen Inbody, “Survey: People think Native Americans don’t exist/aren’t discriminated against,” states that “For many Americans, tribes are relegated to history books. A recent survey found 40 percent of respondents didn’t think Native Americans still exist.” That headline, and the dismaying poll statistic it contained, turned out upon closer inspection to have been fabricated out of thin air.

In April 2018 Newsweek posted a news story titled “One-Third of Americans Don’t Believe 6 Million Jews Were Murdered During the Holocaust.” It was widely shared on social media, including Yahoo News. The disturbing headline seemed to suggest that neo-Nazis are succeeding in sowing Holocaust denial among Americans. The Holocaust is the highest-profile event in history about the dangers of intolerance and anti-Semitism, and with about a third of Americans—over 100 million people—doubting a key aspect of the Holocaust, anti-Jewish sentiment seems widespread indeed. The headline was false, and did not accurately reflect what the poll questions actually asked, as I wrote in a previous column.

In these cases, and many others, the poll results were badly flawed (or simply made up). Americans have misconceptions about a great many things and a demonstrable blindness to social problems facing Native Americans, transgendered people, people of color, and other forms of intolerance, but misinformation isn’t helpful. It’s unfortunate that LGBTQ Nation (and other outlets) chose to characterize the study as “Most People Deliberately Misgender a Trans Person to Show Disrespect” instead of “Most People Support, and Want Their Country To Protect, Trans People,” which more accurately captures the findings. As always, a healthy dose of media literacy is the best antidote to media myths.

The fuller study report, as published in The Financial and elsewhere, contains an unusually detailed list of caveats regarding the survey’s methodologies and results, effectively warning against precisely the overly simplistic, conclusion-jumping headlines like the one from LGBTQ Nation:

It must be acknowledged here that there are myriad challenges to undertaking research on this potentially sensitive and low-information topic. Most pressing was the challenge of the word “transgender” itself, which is fairly widely used in English (alongside other, older, and occasionally incorrect terms like transsexual, intersex, and hermaphrodite) – but does not have a perfect translation in all languages. Indeed, words that mean transgender in other languages can have overtly pejorative overtones, or can refer to a specific gender, e.g. Hijra in India which refers almost universally to transgender females born with male genitalia.

To ensure as much clarity as possible, Ipsos (in discussion with The Williams Institute and BuzzFeed News, in 2016) developed questions using the phrase “people who dress and live as one sex even though they were born another” which is used throughout the survey instead of the word “transgender” or any translation thereof. This is not the only challenge associated with this kind of survey research, however, and attempting to understand public awareness of and proximity to transgender individuals is equally challenging.

For example, only tiny percentages in each country (0% to 2%, with two exceptions) have individuals who self-identify as transgender (or say that they themselves “dress and live as one sex even though they were born another”) – but even this range alone is very wide when considering such a low-incidence population. Furthermore, the figure reported is higher in the United States (5%) and in India (4%), both of which seem far higher than reality. Indeed, the incidence of individuals identifying as transgender themselves in many countries, or as personally close to a transgender individual seem higher than we might expect given existing incidence data. However, there are a range of possible explanations for this finding, detailed below. Simple error ranges associated with survey work, typically referred to as “Margins of Error,” “Credibility Intervals,” or “Confidence Intervals”. For online surveys with the sample sizes included here, the associated error range is between 3 and 5 points.

Misreading of or speeding through the survey question, which is a more common occurrence – for a plethora or complex reasons centering around volume of online panel work – in the United States. Finally, and perhaps most substantively, we cannot shy away from the fact that the methodology itself could be contributing to this issue. Online methodology is the most cost-effective and efficient way to survey large populations simultaneously in many countries; indeed, a phone survey of the same size would cost – by Ipsos’ estimates – at least ten times more than the online survey Ipsos ran (for which we absorbed the cost ourselves). However, the non-universal access to the internet – especially in countries like India where access is very much correlated with urbanity, education, and wealth – means that the survey’s representivity is imperfect for many of these 27 countries. As stated at the outset, as a result of this dynamic we have chosen to focus our analysis on the 16 countries where online penetration is so high as to feel confident that an online survey is genuinely representative of the country’s population. But any social scientist will agree that even in these places, online surveys are not designed to measure point-estimate population incidences such as the proportion of the population that is transgender. We pursue this question and others with the tools that are available to us, and so feel that the findings from this study are greatly relevant and important to public engagement on attitudes towards and understanding of transgender individuals – and in the interest of full transparency we are of course publishing the data from all 27 countries so that it can be reviewed and utilized as appropriate.

When Anti-Vaccination Fears Come From Inside the House