The following post comes to us from CFI supporter Simon, who grew up in Greece and has been following a new case of persecution for blasphemy — a case which has been largely ignored by the English-speaking media.

On Friday September 21 in the village of Psahna in the Evia Prefecture of Greece, the Police Electronic Crimes Unit arrested* a 27 year old male atheist Greek citizen on charges of malicious blasphemy and offense of religion. His name has not been made available publicly due to to the country’s privacy laws.The arrest came about after the authorities discovered that he is the administrator of a now-removed satirical Facebook page for “Elder Pastitsios” after receiving over one hundred thousand complaints including some death threats. The news of the arrest created a worldwide interest in the case with the Twitter hashtag #FreeGeronPastitsios becoming a global trending topic and a relevant petition by the Humanist Union of Greece has received over 9,000 signatures so far on Change.org. The Greek Atheist Union will hold a protest in Athens outside parliament on Friday September 28 demanding that the charges be dropped and that the blasphemy laws be repealed. 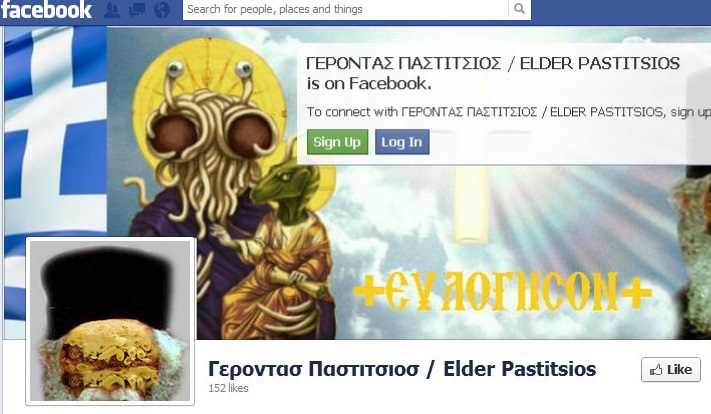 The Facebook page was for a fictional character based on well-known deceased Greek Orthodox monk Elder Paisios, where his name and face were substituted with “pastitsio”- a local pasta and bechamel dish. Elder Paisios is believed by many Orthodox Greeks to have performed numerous miracles and prophecies both during his life and after his death in 1994. His place of burial in Northern Greece is a frequent destination by believers seeking miracles and books with stories about his teachings and prophecies are quite popular.

The district attorney will prosecute only the charge of offense of religion which carries a maximum penalty of two years imprisonment, however prosecutions under the statute have been very rare in recent years and he is not expected to receive jail time. A trial date has not yet been set.

Four days before the arrest on September 17, MP Christos Pappas from the neo-nazi Golden Dawn party had brought the page to the attention of the justice minister and submitted an official inquiry into why the Facebook page was not being addressed by the Eletronic Crimes Unit. According to site NewsIt*, the police claim they had already concluded their investigation two days before the question was raised in parliament. Following the publication of the arrest, Greece’s leftist primary opposition party SYRIZA strongly denounced* the arrest as did it’s offshoot and now ruling coalition junior partner Democratic Left as well as the Greek Communist Party. Center-left party PASOK -also a member of the ruling coalition- issued a more tepid response opposing the arrest but affirming the need to “protect religious and national identity”. Golden Dawn lauded the arrest stating* that their MP’s question “mobilized the government into taking action”.

According to the page’s administrator, he angered many in the Greek Orthodox church leadership after he created a fictional story* of a posthumous miracle by Elder Paisios which was submitted to various Orthodox and far-right blogs in July and then it was reproduced both online and even on a far-right newspaper. The story was based on several existing tales that were already circulating online and involved a miraculous recovery of a teenage drug addict who had been in a coma after a car accident after his mother placed dirt from Elder Paisios’ grave in a talisman under her son’s pillow.

In the an interview* after his arrest, he states that he did this not only to expose the gullibility of the faithful, but primarily to show the poor fact-checking done by these sites. After he detailed this on the “Elder Pastitsios” page on July 26, both it’s popularity and the amount of hostile comments increased substantially compared to the past year in which he had been posting similar satirical content without incident. He has suspended the page voluntarily and stated that he may re-enable it for an hour so people can see what all the fuss is about. He says that he is an atheist because he likes to think for himself and that he has proven his point regarding the reliability of miracle testimonials and the exploitation of alleged prophecies by religious figures. He plans on focusing his future activism on the repeal of Greece’s blasphemy laws.

*Links to sites in Greek.