I’m always fascinated by how thinking goes wrong. Sometimes it’s the result of intentional deception or obfuscation, such as is often found in advertising or political speech.

But more often it’s the result of critical thinking lapses, logical errors, or simply misunderstanding. It’s errors of interpretation, often of substituting what someone actually says for what we think they’re saying, or expecting them to say. By understanding how thinking goes wrong—ideally taken from real-world situations instead of staid examples of informal logic taken from textbooks—we can help identify such patterns in our own thinking and hopefully improve communication.

A few weeks ago I wrote a blog about an interaction I had on social media where a comment about whether a phrase used by actor Henry Cavill in an interview was intended literally or figuratively was badly misunderstood and somehow ended in a heated argument involving accusations of misogyny!

The exchange was all the more puzzling because everyone involved in the discussion was on the same page, socially and politically, about the topic. There was no actual substantive disagreement; instead a cascade of errors and misunderstandings soon rendered the discussion futile and allies cast as enemies.

I’m reminded of a famous Emo Philips joke about fundamentalist religion involving two people who have virtually identical beliefs, but after several questions one of them focuses on the tiny difference between them and in the punchline yells, “Die, heretic!”

There are enough people with whom we sincerely disagree that it benefits everyone—especially in today’s divisive age—to be sure that we understand each other before concluding that allies are actually enemies. Earlier this year a high-profile example of this emerged in an academic setting.

In May of this year a video of a defiant Cornell university student who stripped down to her underwear for a classroom presentation went viral and made national news. The action by Letitia Chai was in protest of what she considered to be an unreasonable and sexist comment about her clothing from her professor, Rebekah Maggor. 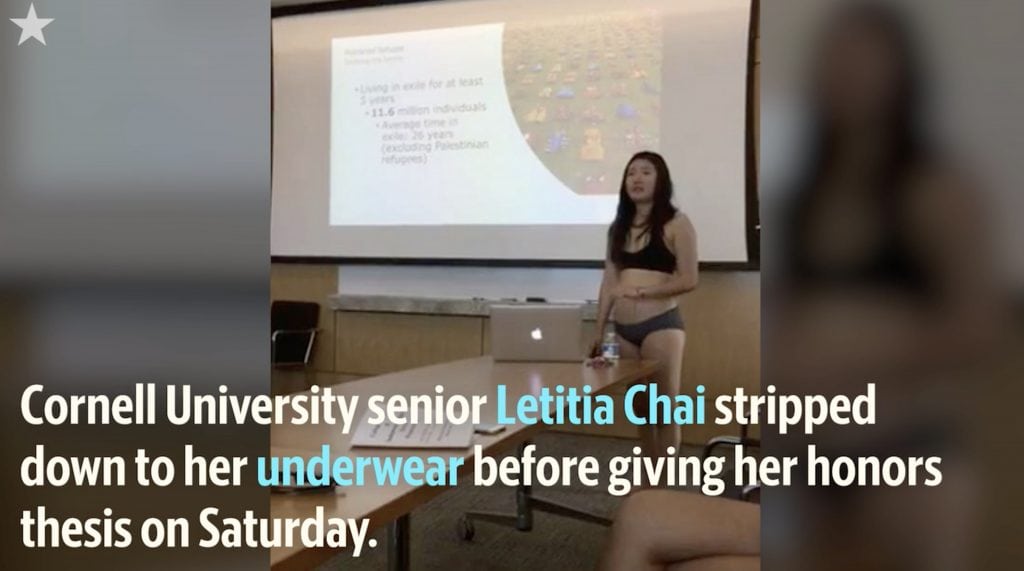 In a May 2, 2018, post on Facebook Chai wrote that “I was supposed to perform a draft of my College Scholar thesis presentation in my Acting in Public class… When I got up to start, my professor said: ‘Is that really what you would wear?’ I was wearing a long-sleeve blue button-down shirt and denim cut-offs. She, a white woman, continued: ‘Your shorts are too short.’ The professor proceeded to tell me, in front of my whole class, that I was inviting the male gaze away from the content of my presentation and onto my body. She said I was making a statement by wearing my outfit. I told her I sure as hell wouldn’t change my statement to make her or anyone else feel more comfortable.” After several exchanges with other students, Chai left the classroom in tears.

She later wrote, “My mom is a Feminist, Gender, Sexuality Studies professor. She has dedicated her life to the empowerment of people in all gender identities. So, I think my mother would fine with my shorts… I ask you, my friends at Cornell, to stand in solidarity with every person who has been asked to change how they look to make other people feel more comfortable.”

Chai assumed, for reasons that are not clear, that the professor’s comment about how she was dressed was related to, or rooted in, feminism, gender issues, and a desire to make her (or others in the class) “more comfortable.” The teacher, however, noted that the issue wasn’t the “discomfort” of anyone in the class but instead the appropriateness of the clothing as part of the thesis presentation, which called for formal clothing from all the students. Anyone, man or woman, giving a formal presentation for the class would be expected to not wear cut-offs—not because it made anyone uncomfortable but instead because how a person dresses (along with how they speak, what language they use, such as jargon or slang, the content of any accompanying visual materials, and so on) are part of how a speaker presents herself or himself. Presumably Maggor would have made the same comment to a man wearing a Budweiser or Hooters t-shirt, or any other clothing choice that distracts from the message of the presentation.

Virtually everyone else in the room disputed key aspects of Chai’s account. In an open letter to the Cornell Daily Sun, all but one of the other students who witnessed the events felt compelled to correct the record: “We are ​eleven of the other students in the ​Acting in Public class who were present during the events that unfolded on Wednesday. It is our hope that, in this letter, we may share with the general public our experience and interpretation of the events that unfolded during Wednesday’s class, in addition to addressing Letitia Chai’s Facebook post. As students who firmly believe in the tenets of justice and the commitment to fair representation, we feel that it is our duty to make the following statement:

We support Letitia’s commitment to the cause of women’s rights, there is no doubt about that—however, aspects of the Facebook post she made detailing Wednesday’s incident do not align with our collective agreement of how events transpired that day and the intentions behind them. All of us feel that our professor’s words and actions were unfairly represented in the post, with certain quotes taken out of context, and we wish to clarify any misunderstandings that may have occurred…. The majority of us are students of color, from multiethnic backgrounds, who very much relate to Letitia’s frustration with systemic oppression that is part of the fabric of this country. We do not want to discredit her narrative. However, we feel it is important and our obligation to share our impression of Wednesday’s events to provide a fair representation of the situation.”

The students then described what occurred: “Letitia stood up to give her speech. Before she began, our professor asked Letitia if she would wear ‘those shorts’ to her actual presentation on Saturday. Our professor regularly asks all of the students, male and female, such questions to clarify appropriate attire for public speaking. Our professor went on to say that what you wear and how you present yourself make a statement. She noted that if you were to wear jean shorts to your thesis presentation, that is a statement. Her focus on attire was a means of noting the importance of professionalism in certain public speaking situations…. She wholeheartedly agreed that her initial comment was about professionalism rather than the ‘male gaze’ mentioned in the student discussion. She also apologized for her choice of words, acknowledging that the notion of ‘short shorts’ on women carries a lot of cultural and political baggage. Unfortunately, because Letitia was not in the room, she was not able to hear these comments, and we believe this contributed to the miscommunication.”

The fellow students repeatedly go out of their way to make it clear that they respect Chai and her commitment to equality, and it’s obvious from reading the letter that they bear no grudge against her. They are merely pointing out that the observations and interpretations Chai shared on social media are disputed by virtually everyone else present.

Because of psychological priming and confirmation bias, we often see what we want or expect to see, and interpret otherwise neutral and ambiguous comments as affirming our preconceptions. Those who are vigilant for sexist comments may find them even where none exist. Seeing offense where none is intended, or in fact none exists, is not uncommon. Part of it is a lack of charity and a refusal to give others the benefit of the doubt when there is room for ambiguity. The professor wasn’t a leering male or a conservative woman trying to enforce her moral code on her students.

The minority and international students in the class also independently (and flatly) refuted Chai’s characterization of Prof. Maggor as attempting to enforce sexism, patriarchy, or any oppression. “She is someone keenly aware of her place in the world and of how important it is to elevate voices of color. Our professor is a white, female ally who puts actions behind her allyship—which, in all honesty, is very rare. Her directorial work focuses on the translation of plays from the Middle East that deal with issues of social justice. She uses her privilege to bring original playwrights (often refugees) from overseas so that they may get an audience for their immensely important pieces of work. There is no one else at Cornell doing work like this for an area of the world largely ignored by the West, and yes–by Cornell. She takes careful efforts with casting POC actors and actresses and has engaged in long discussions with POC students outside of class about supporting us to make our voices heard in an industry that often silences us. We feel that these aspects of her character are fundamental to who she is. We acknowledge the undeniable history of white peers mistreating POC students and the pain of microaggressions in the professional space. While we do believe there was an error of phrasing on our professor’s part, her intent, to us, has always been extremely sincere. For us, because she has mentioned the social role of attire on multiple occasions to other students (male, female, of various backgrounds) as a natural consequence of performing publicly, we do not believe this instance occurred with malicious intent.”

Applying the critical thinking principle of Occam’s Razor, it seems more likely that Chai was questioned about her dress as it related specifically to the topic of the class—presenting in public—than that because the female, feminist professor was concerned that Chai’s outfit would distract the males in the class.

Recasting a misunderstanding as misogyny benefits no one, and as is often the case it is women who are the ones damaged by such claims. Maggor, a staunch ally, was publicly berated and characterized as a sexist when by all accounts (except Chai’s) the opposite is the truth. This incident helped spread unfounded concern and fear—that Cornell students are being harassed by sexism—and on the other side of the coin that teachers who are allies in the war against oppression may find themselves falsely accused of exactly such behavior if a single student misinterprets a word or phrase, or takes them out of context.

It’s a lesson in being charitable when interpreting other people’s words, and not creating enemies (or oppressors) where none exist. Accusations of sexism and misogyny can be career-ending, especially at a liberal university such as Cornell. Had Chai’s classmates not defended their teacher in light of this misunderstanding, Maggor could have been fired, and the educational environment at Cornell would have suffered because of it.

These examples illustrate how important it is to correctly understand others and not demonize people based on minor or mistaken assumptions. It’s too easy to assume the worst about others, and mistake allies for enemies.