The debate over free speech and safe spaces advanced with an impassioned, heated panel discussion at the last session of the second day of Women in Secularism 4. It wouldn’t be correct to say that there were “bright lines” between opinions, because the core values were broadly shared among the panelists, but the differences within those values were strongly held. 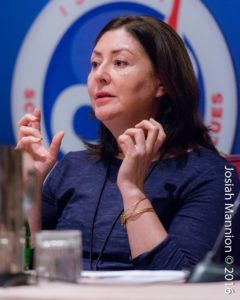 Thoroughly opposing the notion of safe spaces was Maryam Namazie, forcefully declaring that the rise of safe spaces is due almost entirely to identity politics, and that they are really a form of censorship. “Universities should be unsafe spaces for ideas you might not be comfortable with,” she said, arguing that identity politics have a homogenizing effect in marginalized communities, stifling dissent from within. 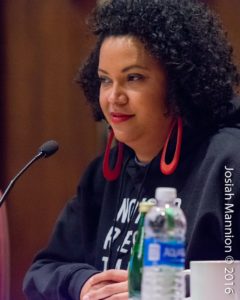 Diane Burkholder, cofounder of One-Struggle KC and American Humanist Association’s LGBTQ Humanist Alliance, had her Women in Secularism debut on this panel. She firmly took the position that given the white-dominated structure that universities exist in, one privileged community shouldn’t be telling another marginalized community what their spaces can and cannot look like. 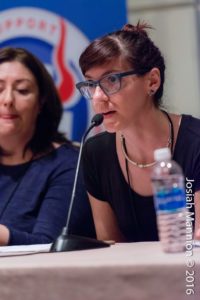 Melanie Brewster advocated for something simpler, and it’s a theme she would return to: thoughtfulness. Rather than focus on censorship, she posited that it’s no big sacrifice to allow someone to be clear about what hurts them, and being open to hearing that if you’re in a position of power. Without having a place where they are safe to speak, she asked, how else can they have their voices heard when they are so often being told to keep quiet? (Burkholder expanded on this, saying that taking accountability for the words one uses is an exercise of emotional intelligence, which is something incredibly valuable in itself.) 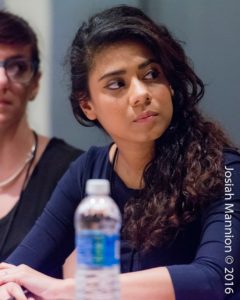 A move to the discussion of trigger warnings showed similar fault lines. Brewster described them as a simple courtesy, a humane way to prepare people for kinds of content that could genuinely affect them on a physiological/psychological level. Burkholder, who preferred the term “content warning,” noted that in her own experience of being deluged with images of black pain, “if I can do something to protect by baby bubble,” there are times when such a warning is absolutely necessary for her well being.

Haider, however, was concerned about the precedent such concepts set, that these warnings might be “inculcating an attitude among students that they have a right not to feel disturbed or upset by something.” Namazie was also not convinced of their value, saying, “I wish I had a trigger warning for this panel!”

More clarity about the lines of disagreement emerged when the discussion addressed the dis-invitation of certain speakers, something Namazie has had first hand experience with. Namazie and Haider advocated for protest as a way to express opposition for unwanted speakers, though Brewster wondered aloud whether students’ demands for dis-invitations are not themselves an example of free speech. And there seemed to be an agreement that students have the right to ask. (Or, as Ashley Miller the moderator put it, “Isn’t telling someone to shut up speech?”) Burkholder raised the point that protest isn’t a blanket solution, particularly when it comes to black protests on campus, which are often met with hostility.

Everyone seemed to agree that universities are places where debate needs to happen, where protest and argument and challenging ideas are vital, but the clash comes when the discussion turns to where or whether partitions can go up to contain and protect certain identities and/or ideas. At what point does speech morph into, well, something else that warrants cordoning off? And who decides?

It may only be answerable one campus, one group, one person at a time. And even then?