Last month an indignant Florida mother named Barbara took to Twitter seeking advice for a problem: “I’m really PISSED; my daughter who is in the 12th grade recently registered to vote through her high school. Her teacher told the class that they all must register as Republicans or else they would not be allowed to vote. Any suggestions on how to address this?” 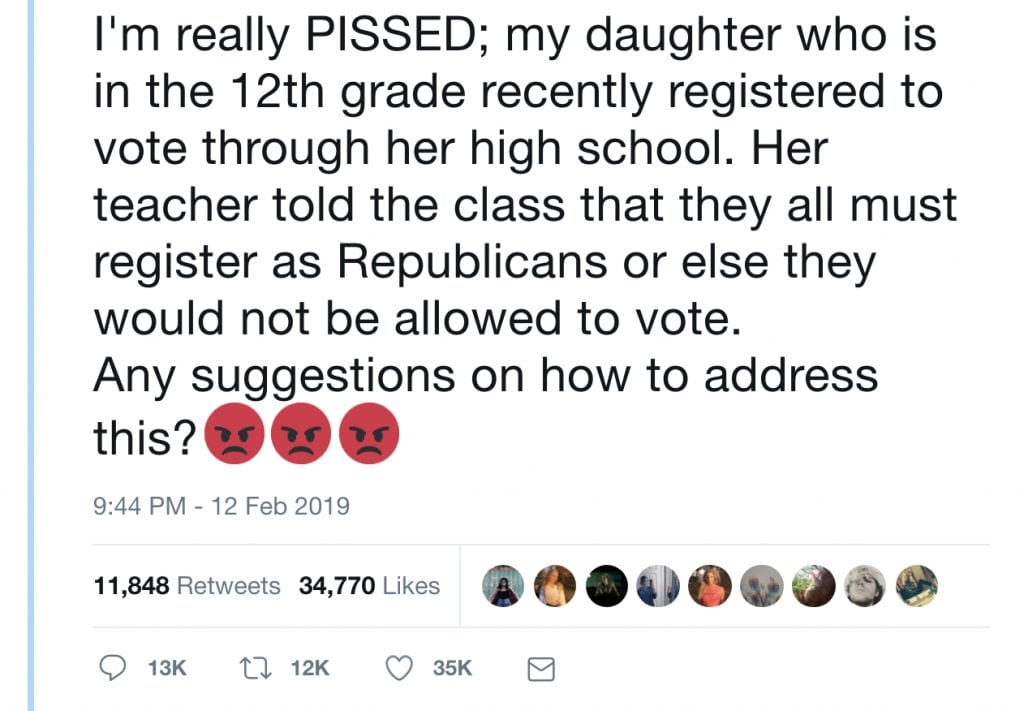 The post garnered a sea of supportive comments; the outrage was both instant and predictable. There were calls to fire the teacher, start petitions, sue the school district, and more. At least one journalist offered to write about it in the local newspaper.

Two days later Barbara posted an update: “I went to the school this morning it had a sit-down with the principal. I explained to him what was said to my daughter by her economics teacher, he said he would look into it. I heard back from him about an hour later and of course he said the teacher denied it. So I had my daughter standing right there with me and had her tell me again verbatim what does male teacher said to her, again the principal said he would look into it and get back with me. I am waiting for a response from him regarding his second meeting with this teacher. Before I take any further action with regarding this teacher, I want to sit down with him. I don’t believe in destroying someone’s life but I do believe in making sure but they understand they have no right to tell any person what party to register for!”

This was met with more encouragement and outrage, though Barbara posted less frequently in the following days due to the flu. About a week later, after dozens of followers asked her for updates on Twitter, she finally responded: “Met with the teacher & principal this afternoon. It was a really enlightening experience for me. In the future I will not be so quick to Tweet till I have all the facts! This particular teacher is a registered Democrat and my daughter (who will be an honors graduate, however she lacks sorely in common sense department) took what he said to heart but severely misunderstood what the message was. He was giving them a scenario using the Primary’s in our county as an example. The scenario was that only Republicans were running and that there were no Democrats opposing on the ticket. The questions he posed was: Would you be able to vote in the Primary’s if you were registered as a Democrat? The answer of course was no, that you could not as a Democrat vote on a Republican based primary ticket, so if you wanted to vote in the Primary’s you would have to go register as a Republican to vote for your candidates. The class then took a survey to see what party best fit their beliefs, my daughter came Independent, she then went & spoke with the teacher (questioning the Independent outcome) who again went with the scenario of the primary’s trying to get her to understand that as an Independent that she would not be able to vote in the primary’s and that according to the scenario she would have to register Republican.”

Barbara concluded, “My daughter, BLESS HER HEART took this to heart and truly believed that he was telling her to register as a Republican. Me being the overprotective Mom jumped to conclusions. I have been humbled by this experience, the support & love that I received from everyone here, it has been amazing. I was & still am overwhelmed by the response that my tweet got.”

This case study offers some lessons in skepticism and critical thinking. To her credit, Barbara eventually acknowledged that she had jumped to conclusions, though it’s unfortunate that her admittedly common sense-impaired daughter didn’t clarify the matter with her teacher and/or her fellow students before passing along the misinformation to her mother, who promptly took to Twitter (of all places) to air her grievances.

A legitimately concerning issue that could, and perhaps should, have been handled personally was brought to social media instead. It’s hard to believe that Barbara genuinely had no idea how to address the question of a teacher allegedly saying something inappropriate to his or her class—whether she should, for example, first contact the school for a response or start a boycott, or file a lawsuit. The first three words of her post clearly reveal her motivations: she was angry and outraged, wanting to vent her frustrations and soothe them with validating support from social media—which she got in spades. In other words taking the matter to social media was done for emotional purposes, not for problem-solving purposes. She didn’t need to ask her social media friends what to do; she knew exactly what to, and did it. If she wants to take it to Twitter she certainly has the right to do so, but we should be clear about why it was done.

The perils of social media justice are both significant and well documented; see, for example Jon Ronson’s 2015 book So You’ve Been Publicly Shamed. It could have been much worse: Despite a few requests, Barbara wisely avoided naming the teacher or school, which could easily have led to the innocent teacher being doxxed and harassed.

I saw it soon after it was shared on social media; the story initially seemed plausible but I grew suspicious when Barbara reported that the teacher had denied it. After all, it would be relatively easy to determine the truth: you just ask the other students in the class. If asked, a few might lie for a beloved teacher who’d made a poor decision or word choice, but it’s extremely unlikely that the entire class would participate in a cover-up and deny to a person what the whole class heard.

This is what happens when we fail to check the facts. What at first seemed like a clear-cut case of Republicans trying to influence children in schools turned out to be a misunderstanding. It’s not merely that the mother believed her own child—which is both understandable and expected—but also that she assumed that if there was any discrepancy, someone was lying.

In this case we have a high school student who swears, several times, that her teacher told the class to vote Republican, and a high school teacher (a Democrat, as it turns out) who says he did not. We hear this all the time: “Why would someone lie about that?” but critical thinkers will recognize this as a false choice fallacy, for it assumes that someone is lying. It didn’t seem to occur to Barbara that nobody was necessarily lying.

Examining alternative explanations is an important skeptical and investigative technique. When I interview eyewitnesses who relate their encounters with unexplained experiences, I never ask “Why would someone lie about that?” I believe it’s important to give others the benefit of the doubt instead of immediately assuming malice or deception on their part if what they say is implausible or impossible. Part of that is my background in psychology—being aware of how fallible our perceptions are, and how easily our interpretations can be swayed by cognitive biases including confirmation bias—but it’s also about the principle of charity.

There are other lessons about the nature of negativity and outrage in the era of digital media cycles. The whole story unfolded over the course of about a week and a half, and due to the nature of social media in general (and especially Twitter)—in which immediacy is prized—most people who first saw Barbara’s first post on the matter never saw her last. Revisiting old news is not only actively discouraged but difficult to do; social media users have developed a Pavlovian response to commenting on whatever is new, outrageous, or both.

The original post was shared widely on social media (and appeared at least twice in posts by my friends), but of course the updated tweet got virtually no attention at all. Such is the nature of both “news” and social media, but it provides an example of the psychological sticking power of bad news and outrage.

It’s often noted that a lie can travel around the world while truth is putting its shoes on, and this incident is instructive because Twitter provides a way of quantifying the reach of both the initial outraged post and the follow-up debunking clarification. The post falsely accusing the teacher of telling students to vote Republican got nearly 12,000 retweets and 35,000 likes; her final tweet nine days later clarifying the situation got a grand total of two likes—and not a single retweet. 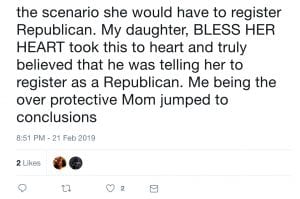 There’s no way to know precisely how many people saw the initial tweets and the Facebook posts it spawned (not everyone who reads a post interacts with it), but it’s surely in the tens of thousands, perhaps 50,000 or more. By contrast, it’s likely that fewer than 1% of that number saw the mom’s mea culpa. The last thing that tens of thousands of Twitter and Facebook users heard, a Florida teacher had told his or her class to vote Republican, and when the indignant parent complained, “of course…the teacher denied it.”

People often complain about all the bad news, divisiveness, and malice we see in the news and on social media, but it’s important to recognize the role the media plays in our perceptions. The social media we routinely use, combined with psychological biases, distorts our understanding of the world—and not for the better.