Although science discredits the so-called “sun miracles” at Fatima, Portugal, in 1917, the devout continue to make supernatural claims about the events and the three children “visionaries” who supposedly communicated with the Virgin Mary at the site.  I heard some of these from a caller when I appeared in June 2018 on George Noory’s popular Coast to Coast AM radio show.

She got out of line, calling me “ignorant” and (before being cut off) managed to make additional claims about Fatima. I had observed pointedly that science knew the sun had not spun, danced in the sky, or done any of the other things pilgrims reported. That is because the very same sun had been over Paris, London, and elsewhere, and astronomers could verify that it had everywhere behaved normally. As well, the fact that people reported several quite different effects was a good indication that—rather than there having been a single group-perceived phenomenon—there were instead various perceptions.  Being unable to stare directly at the sun, some might have darted their eyes back and forth, thus giving the illusion the sun was moving. Retinal distortions were also likely. I described several such possibilities in my book, Looking for a Miracle (1993, 176–181).

However, the angry caller was not going to let any such rational explanations inhibit her belief in the supernatural, and she made some wild claims. Referring to the three child visionaries, she said of Jacinta that she had been attended by miracles even in death. The little girl had been exhumed in 1935 and, according to the caller, had not only been found incorrupt (had not decomposed) but had turned into a fully-grown woman! I had not heard this wild claim before, and suspected it was simply an exaggeration, like those common to folklore. 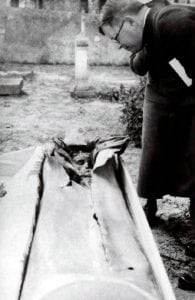 Sources indicate that when Jacinta was exhumed on September 12, 1935, “Her face was found to be incorrupt” (Solimeo 2008). This was just fifteen years after her death (in 1920), but it looks emaciated and mummified in a photo taken at the exhumation (“Blessed” 2010).  As a result she looked older, and, indeed, her father stated that it “was somewhat like looking at a person grown old, whom one had known young” (“Blessed” 2010).(See photograph.) That seems to account for the tale of her appearing fully grown. Francisco’s body had been found decomposed, and by 1951 Jacinta’s had also begun to decompose when the two were exhumed again, for reburial in the basilica.

The caller had also mentioned that the body of Saint Bernadette of Lourdes had been found incorrupt too, and that her appearance was fresh and beautiful. In fact, thirty years after her death her body (whether or not injected with embalming fluid) was found “emaciated” and ten years later it had to be covered with a wax mask. That is common practice now for saints whose corpses are put on exhibition. Some are mere skeletons, and anyway the Vatican no longer claims incorruptibility is evidence of a miracle (Nickell 1993, 85–93; Harper 2015).

Blessed Jacinta of Fatima and her incorrupt body. 2010. Online at http://thydailybreadforum.proboards.com/thread/1253; accessed June 29, 2018.

In France and America, Secularism Attacked from All Sides

Evidence of a Calamity