Everyone was excited to see Katha Pollitt today. She’s been at Women in Secularism conferences before, and she’s always been evocative, enlightening, and funny. This was certainly the case today as she was interviewed on stage by Annie Laurie Gaylor about getting abortion “out of the closet” and out of the shadow of stigma.

“We have to start talking about abortion as a normal part of women’s lives,” Pollitt told us. “It always has been.” And in fact, even religions have not been, and are not always, tied to the notion that a fertilized egg is equivalent to a full person. She talked about the “wiggle room” that Southern Baptists allow for abortion, and how in Judaism, the woman is the “first person” of priority when there is a question of primacy.

A major stumbling block when it comes to abortion is the ingrained perception of women’s bodies as somehow being community property. Part of this is exacerbated by what Pollitt called the “baby-fication” of the fetus, treating a glob of cells like it’s a cute little infant in a onesie. But more to the point, the problem is that much of society views the woman’s body as violable. “If you’re looking at a fetus [in an ultrasound],” she said, “you’re erasing the woman.”

She brought up the fact that Christopher Hitchens had expressed his opposition to abortion, saying that to end a pregnancy must be a societal decision. Exasperated, Pollitt said, “Is society going to die in childbirth?”

In a quick aside toward the end, Gaylor asked Pollitt about why she is overt about her atheism, Pollitt said, “I think it’s important that that view be represented in the public sphere.” She’s an excellent representative, wouldn’t you say? 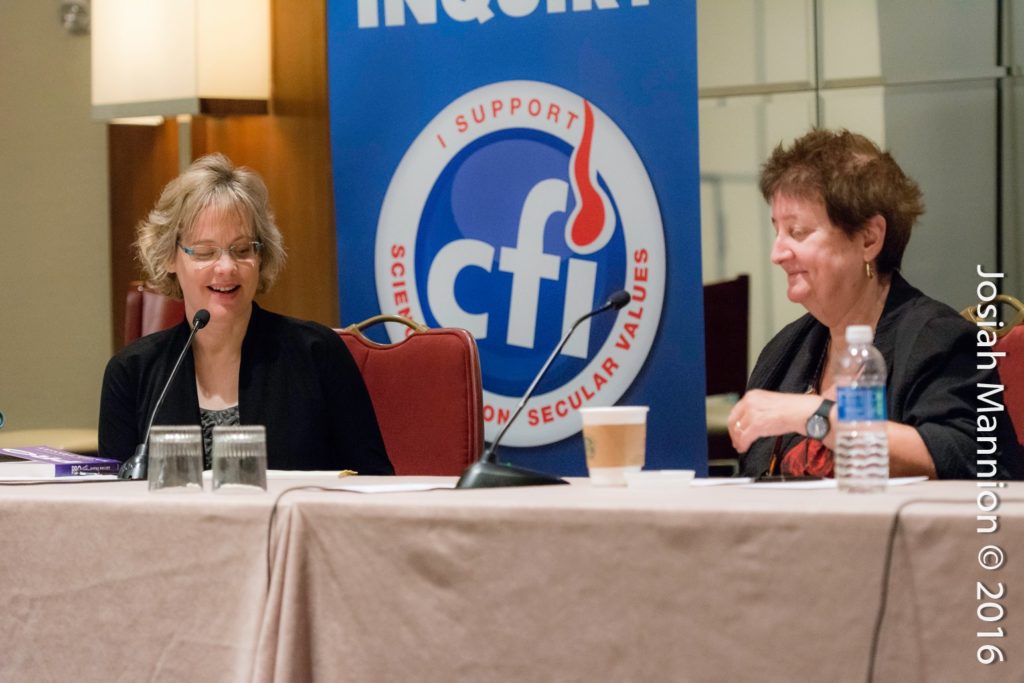 Fault Lines for Free Speech at Women in Secularism 4