So, my help was suddenly needed at the CSICon AV station for the presentation by Rob Brotherton, author of Suspicious Minds: Why We Believe Conspiracy Theories, so I didn’t take notes about his talk, and instead pressed a button to switch camera angles for the video recording. 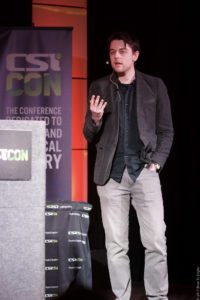 Luckily, it was a really compelling talk that I think I retained a great deal of.

So, why do people believe in absurd conspiracy theories like the faked Moon landing or the shadowy network of plotters behind the Kennedy assassination? It helps to think about it terms of people’s perceptions of agency and intent.

Generally, if a person is more inclined to ascribe intent to ambiguous scenarios, they are also more likely to be conspiracy theorists. If you hear “he burned down the house,” and assume it means he burned it down out of malicious pyromania or insurance fraud, you’re a conspiracy theorist. If you presume the statement means it was an accident related to a toaster or dropped cigarette, you’re less likely to be an Alex Jones fan (my words).

Also, if something important happens that has a major impact, it’s difficult for many people to believe that they have a simple explanation. But Brotherton showed that many major events that were almost world-shaking, but turned out not to be, the simple explanations seem to pass muster with everyone. JFK was killed, changing the course of history, so the lone-gunman story didn’t make sense to conspiracy theorists. Ronald Reagan was shot, but survived, meaning normality was restored, and there are today no serious Reagan-shooting conspiracy theories.

There was also a thing about some black and white animated geometric shapes fighting with each other, which was cool, but I was thinking too hard about the button I had to press at the time.

Well, let me tell you, if you didn’t see it here in person, when the video goes up at some point in the medium to distant future, you’re going to love it. Especially the camera switching, which was nothing short of inspired.

CSICon is the premier science, skeptics and critical thinking conference, where hundreds of critical thinkers come to Las Vegas, the city of illusions, to hear from the leading lights of science and skepticism.

My Psychic Scam Letter to CSICon: Presenting the Balles Prize for Critical Thinking

Julia Sweeney Opens Up at CSICon

The Belief Barrier: Moving an Immovable Object at CSICon