Isaiah Harris Hughes (born on Christmas Day, 1813, died May 24, 1891) was a conjurer’s conjurer. Almost forgotten today, Hughes was once widely known as the Fakir of Ava. Since he is buried in Buffalo’s beautiful Forest Lawn Cemetery, not far from where my wife Diana and I live, we often pay our respects at his stately grave. (See photo by author.) 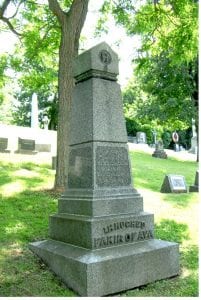 Born in Essex, England, Hughes moved to the United States and took up the art of stage magic. He reportedly began as an itinerant medicine show operator, performing magic to draw crowds and then hawking nostrums and elixirs. Subsequently, wearing dark makeup and exotic clothing, he created the persona of an illusionist from Ava in Burma. Billing himself “The Fakir of Ava, Chief of Staff of Conjurers to His Sublime Greatness the Nanka of Aristaphae,” he was extremely creative. Not surprisingly, he was widely copied—both as to his exotic presentations and his magician’s name.

Hughes transformed standard European tricks into what were cleverly billed as feats from the East, and he invented many of his own magical effects. His creativity extended to his pioneering in publicity: he was successful in using journalism to promote his shows in advance as well as to report on them afterward, rather than relying on paid advertising. He also came up with the idea of a “gift show”—that is, boosting attendance by offering flashy door prizes, including pianos!

As the fakir aged, Hughes hired an apprentice—Harry Kellar (1849–1922) who eventually performed in his place. In time Kellar became a traveling magician in his own right. (Hughes thus established a direct line of professional descent to other magicians. For example, it extends through Kellar to Harry Houdini [1874–1926], whom Kellar mentored, and thence to Houdini’s ghostwriter Walter Gibson [1897–1985]; from Gibson it continues on to me—whom Gibson influenced and with whom I once spent a wonderful afternoon, while I was Resident Magician at the Houdini Magical Hall of Fame in Niagara Falls, Ontario.)

Unlike some conjurers of his era, Isaiah Hughes was always careful to publicly dissociate himself from any occult magic claims. However, he would add, “But he will illustrate to the satisfaction of all who attend that it is a very easy matter to be deceived, and that a man’s hands are quicker than other people’s eyes.”

Hughes waited until he was fifty-nine to marry, and then wed the seventeen-year-old daughter of a theater scenery artist. She would in time bear him two sons. After his death, however, she confessed to family members that–although she had agreed to marry the older, very wealthy man–at seventeen she had really been in love with his young assistant Harry Kellar. That is therefore one secret—involving magicians—that was never quite kept until the grave.