What did you think of the Catholic Diocese of Brooklyn demanding an apology from Saturday Night Live?

Here’s what SNL did…

Here’s what the DoB said…

“It is likely that no other institution has done more than the Catholic Church to combat and prevent sexual abuse. The insensitivity of the writers, producers, and the cast of SNL around this painful subject is alarming.” 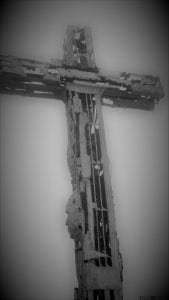 What’s alarming is the Catholic Church’s delayed response to an epidemic of sexual abuse within its ranks. Indeed, one could make the case for exactly the opposite of what they say above: No other institution has done more to provide the perfect environment for child abuse. They sent legions of celibates and sexually-repressed single men into hands-on service with the general public, then swept their crimes under the rug when complaints mounted too high.

For a long time it was the perfect crime.

Their response to the skit is unfathomable chutzpah. The acme of self-delusion.

You know the old definition of chutzpah: A kid kills his parents and then asks the judge for mercy because he’s an orphan. 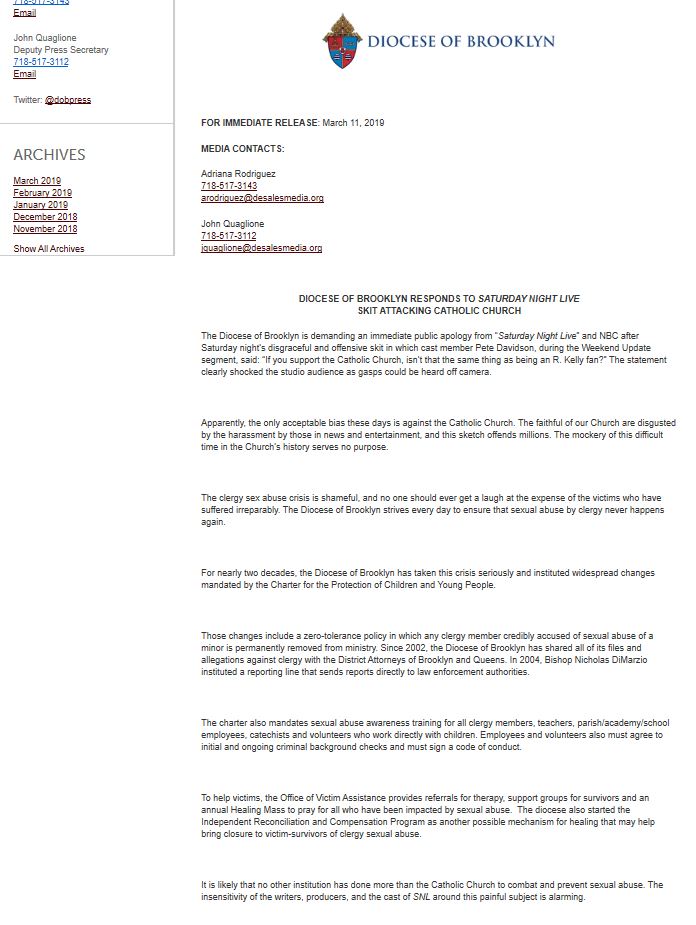 The Catholic Church, from which I escaped relatively unscathed, has outdone itself. The Diocese of Brooklyn crying harassment & bias because someone mocked them for decades (centuries?) of child molestation is akin to John Wayne Gacy saying that he deserves a lighter sentence for hiring lots of teen boys who needed summer jobs.

The Church’s corrective actions only took place (at least) generations after they knew they had a problem. They’ll have to forgive their social critics for still being angry that they waited so long to act.

Please… Don’t want to be ridiculed for a long and storied history of cover-ups and sheltering sexual predators from prosecution, exposure, and even unemployment?

Here’s a thought: Do something about it!

And I’m not talking about the church paying $4 billion – that’s right, billion with a “b” – in settlements to the victims. Paying people off is not solving the problem or protecting people. The criminals in your midst should be prosecuted under U.S. law just like any other sex offender. And so should those who covered up the crimes. Lock them up!

As someone who used to be paid to do stand-up comedy, let me spell this out for the Diocese of Brooklyn. Biting humor is sometimes used to expose hypocrisy. SNL and Pete Davidson are not making fun of R. Kelly’s accusers (victims?), Michael Jackson’s accusers (victims?) the Catholic Church’s victims, or anyone else who is the target of a crime. They are pointing out that sometimes we have to examine the emotional attachment we have toward a person or institution in the face of compelling evidence that they have done something awful. The skit was a hypocrisy-check for anyone defending some bad behavior and accepting other bad behavior.

People are capable of ignoring abominable deeds when they’re done by those we perceive to be on our side. People are also capable of calling for the heads of enemies for faults they would ignore in friends.

By the way, imagine if some secular organization harbored, transferred, protected, and reassigned child molesters to new jobs – and then was exposed to such crimes. The lynch mob would be lined-up for miles seeking our demise. Hell, many hate us anyway.

We should all should try to hold everyone — and ourselves — to the same standards, no matter what the emotional ties.

The Catholic Church should just be quiet and take its lumps until it makes things right.