Get ’em while they’re young, and meet ’em where they live. If there’s anything to take away from a fascinating and wide-ranging panel discussion on women in science, it’s that any changes we hope to see in how women are perceived and treated in the practice or the communication of science, people need to be exposed to examples early in life. And when they’re encountered later in life, when opinions are already solidifying, they must be met on their own ground, at least partly. A connection based on compassion must be made.

But, oh, there was so much covered in this discussion among five remarkable women of science.

Each panelist told of their experiences of living with a what I might call an uncurrent of diminishment, where their expertise or credentials are held in less esteem, or outright rejected, because of their sex. 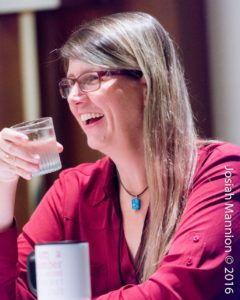 Janet D. Stemwedel of San Jose State University is an authority on the philosophy of science, and said that she used to blog under a pseudonym, and readers assumed her to be male. “Once I decloaked,” she said, “all of a sudden I got less smart.” This is just one example of an endemic problem that even we smartypants skeptics have yet to fully come to terms with. As Stemwedel said, “It’s one of those biases that skeptics have trouble being skeptical about.” 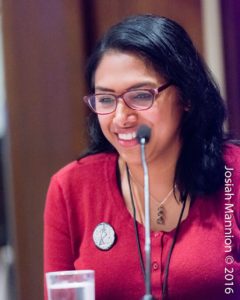 Similarly, science advocate Kavin Senapathy noted that many assume her to be male because of her name, and then find herself subject to criticisms based on her sex or being a mother, not on her actual arguments. Science journalist Emily Willingham would find her credentials doubted as a woman, with readers unaware or unwilling to accept that she also holds a PhD in biological sciences.

Ecologist Kaberi Kar Gupta, originally from Calcutta, focused particularly on the challenge of being a woman of color in the United States. “As a woman, you are always subjected to questions as to whether you are [qualified],” she said. “For women of color, people think you are not probably capable of doing science, that you are not an authority.”

Something particularly new to this writer was an exploration of why it seems that women are a prime target for pseudoscience peddlers, the sellers of woo like Dr. Oz and the Food Babe. Senapathy noted that the “natural” movement that opposes things like GMOs and is wary of “Western medicine” is a movement that dehumanizes women. When women have medical complaints, of pain or discomfort such as migraines or the pain of childbirth, they are too often told by this group that “your pain isn’t real” and that is can be mitigated through mere meditation. “Women’s pain needs to be taken seriously,” she said. 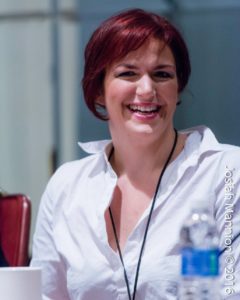 Yvette d’Entremont (aka “The SciBabe”), who moderated the panel, cited her own experience dealing with a chronic health issue that was not taken seriously by doctors, saying “There are holes in the medical system that let people who are really sick look for other [alternative] health care…and it’s hard to know what’s real and what’s not when you’re really desperate.” The “natural” movement, she joked, would simply tell her, “I just needed to live on sunlight and shattering dreams.”

So what to do about these holes in the system that are leaving women desperate to be believed and treated? Willingham looked to her own experience teaching younger science students, and said that these students need to be reminded that much of what they will learn is “based on the norms of white dudes,” and that they need to be taught more about “people who are not them.”

Likewise, Gupta came back to the theme of starting early. As soon as elementary school, starting even with the teaching of basic concepts of evolution, students must be taught to show respect for women.

Something that really resonated with the attendees was Stemwedel’s idea of “epistemic humility,” which she described as “figuring out the limits of what you know and what you can know — what is it safe to conclude, and where is the ice very thin to skate on?” All the panelists found amusing the idea that many in the skeptic community and fans of science have somehow inoculated themselves from being wrong in almost any subject. As d’Entremont pointed out, this is especially absurd given that science is done by imperfect human beings, and “humans are giant fuck-up machines!” 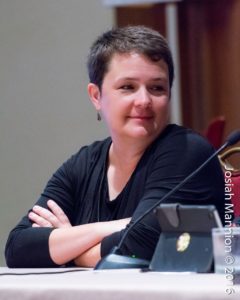 None of the panelists were particularly interested in the idea of atheist evangelism, convincing people out of their religion, even considering the disproportionate harm to women that religion can inflict. Willingham advised us to consider things from the reverse perspective, asking, “How do you feel when someone gets all strident up in your face about the sky daddy?” So it is for a believer who is having atheism thrown at them. Instead, Willingham said that she “walks onto their ground…so they stop rejecting evolution.”

Again, we start from the beginning, and we meet them where they are.

Senapathy noted the pushback she gets from atheists on the Internet when she refrains from being explicitly anti-religious in her work. “While I condemn the injustices of religion…I’ve had those strident atheists come after me,” she said. “All I’m trying to do is meet people where they live.”

It comes down to the goal we have in mind. Do we want to excise all belief in religion, or foster an acceptance and appreciation for science? “I’d rather women find joy in science,” said Stemwedel. “That would be my first priority.”

You can read a recent interview with Kavin Senapathy at the website of CFI’s CSICon Las Vegas, where she’ll also be a speaker. And Emily Willingham recently was a guest on CFI’s Point of Inquiry podcast.