It is closed now but in September 2002 I stayed at a “haunted” mansion in Syracuse known as Ancestors Inn at the Bassett House. It was Friday the Thirteenth.

The mansion is located in Liverpool, NY, near Syracuse  (where—courtesy of Central New York Skeptics—I was speaking at both the Museum of Science and Technology and the Onondaga Community College). It is a restored brick Italianate house of the 1850s (see photo). Curiously, it appears to have had no ghost history prior to October 1998 when Mary and Dan Weidman opened it as a bed and breakfast. 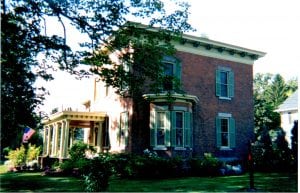 Curiously, also, the supposed ghostly phenomena began with Mary. During the two-month period when the Weidmans were getting their new business ready, after she had finished for the day she would turn off the lights. But then, from the outside, she would look back up at the window and see the light on again! This happened on a few occasions (but not “every time” as one source exaggerates [Smith and Jean 2003]). She thought the original residents, the Bassetts, were doing this to welcome them. Such is magical thinking.

The room in question was at the front of the house and believed to have been the Bassetts’ original bedroom. A lamp in that room was central to the mystery, and I found that it had a touch on-and-off action. I thought a flying insect might have been responsible, but Dan—an electrical engineer by training—had linked the phenomenon to a refrigerator in the hallway (used to keep cold drinks for guests). When it kicked on it sometimes turned on the lamp.

Occasionally, objects would seem to have been transported. Cameras were especially susceptible to this, and guests “would later find their cameras in different places than where they thought they left them” (“Ancestors” 2001). As one soon learns in researching alleged hauntings, however, a single incident is likely to become multiple occurrences in retelling—a habit of raconteurs. In any case, people are often absent-minded, and that fact is typically at the root of what we may term “the-ghost-moved-it phenomenon.”

Once, the Weidman’s teenage son became ill and during the night had an interesting experience. He reported that from time to time he had been awakened by a large African-American man in period-style clothes who gave him either water or his medicine. He regarded the ghost as very comforting. The obvious explanation, of course, is that the apparition was a common type of hallucination known as a “waking dream”—an experience that occurs between being fully asleep or fully awake and has features of both—in this instance due at least in part to the medication. (See Nickell 2012.) If a parent had in fact occasionally awakened him, he or she could easily have “become” the son’s apparitional figure.

Mrs. Weidman had jokingly told me when I checked in that ghosts were “good for business.” Whatever was behind the closing of the inn a decade later, I am convinced ghosts were not responsible.

In France and America, Secularism Attacked from All Sides

Evidence of a Calamity