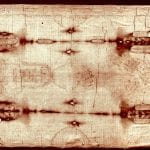 Jerome Corsi, a propagandist for the notorious Shroud of Turin (supposedly Jesus’ burial cloth), and an arch spreader of outrageous conspiracy theories, is now reportedly in the sights of special prosecutor Robert Mueller concerning Corsi’s purported role in the matter of the Trump campaign’s Russia connections during the 2016 presidential election. I first learned of Jerome … 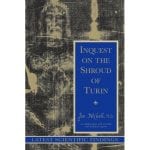 As if there were not already enough evidence debunking the Shroud of Turin—the historical record, a forger’s confession, tempera paint, multiple carbon-dating tests—now new evidence further discredits the authenticity of the reputed burial cloth of Jesus. The new finding—the 2000-year-old skeletal remains of a crucified Roman—was reported on Live Science (Metcalfe 2018). The article (June …

“New research,” reports the Catholic News Agency (July 14, 2017), indicates that the “Shroud of Turin Bears Blood of a Torture Victim.” Actually, it was the research that was tortuous: questionable science in the service of confirmation bias.

March 14, 2016 by Joe Nickell
Here’s a limerick I wrote about the Turin Shroud (at approximately the time I was writing my book, Inquest on the Shroud of Turin):

In 2005, Turin Shroud proponent Ray Rogers claimed that earlier carbon-14 tests of the shroud linen—showing it to date from between 1260 and 1390 and to thus be a fake—were invalid because, he hypothesized, the samples must have been taken from a “medieval patch.” Rogers and I had an exchange of arguments in the Skeptical Inquirer. But a new paper by three Italian chemists, in the same journal in which Rogers published, shows who was right.

The ongoing, six-part series Finding Jesus: Faith, Fact, Forgery— which began on Sunday, March 1—represents CNN’s run-up to Easter. By a coincidence of a financial nature, the series co-appears with a book of the same title by religion writers/filmmakers, David Gibson and Michael McKinley. The first episode of the TV series (but curiously the last chapter of the book) was about the “Shroud” of Turin. Easter after Easter, this alleged burial cloth of Jesus is trotted out like a ghost story at Halloween, typically with the same shoddy standards.

Just in time for Easter 2013 (as readers may recall), a new book claimed recent tests proved that the Turin “shroud” was not medieval, as carbon-14 tests had shown, but instead dated from the first century. The Archbishop of Turin, however, dismissed the results, because the fibers tested could not be authenticated as having actually come from the shroud. (As I pointed out in my blog of March 28, the tests were highly doubtful in any case.) Also, the new pope, Francis I, revealingly referred to the cloth as an “icon” (i.e., a work of art) rather than “relic” (which it would be, in Catholic parlance, if it had actually wrapped the corpse of Jesus).

UPDATED: Another Easter for the Turin “Shroud”

Claims that new tests show the “shroud” of Turin is not medieval after all, but dates from the first century, have been published in the media by Italian researchers. As is typical of a religious rather than scientific agenda, their news was shrewdly released just in time for Easter. That alone casts doubt on the claims, but there is more.

As reported in the UK Independent of December 21, 2011, scientists working for the Italian government have claimed to find evidence that the image of Jesus crucified appearing on the notorious Shroud of Turin was not produced by a medieval artist but instead was likely caused by a supernatural event.

The Alleged Neutrality of Originalism: A Pernicious Myth