Skeptics are known for warning the public about the perils of psychics (ranging from exploitation to fraud), but it may surprise you to know that “real” psychics sometimes join in as well, offering advice about how to avoid those “fake psychics.”

A recent article explained, “Every day thousands of people look to psychics for advice, information and insight on their lives. There’s little doubt that some psychics can help people find peace of mind [sic], but it’s unfortunate that amongst the truly gifted psychics around [sic] there are also several fakes. People who at best have zero or very limited psychic ability but want to help others, or at worst set out to con their audience from the start – whether for payment or because they crave attention and they need to feel special.” 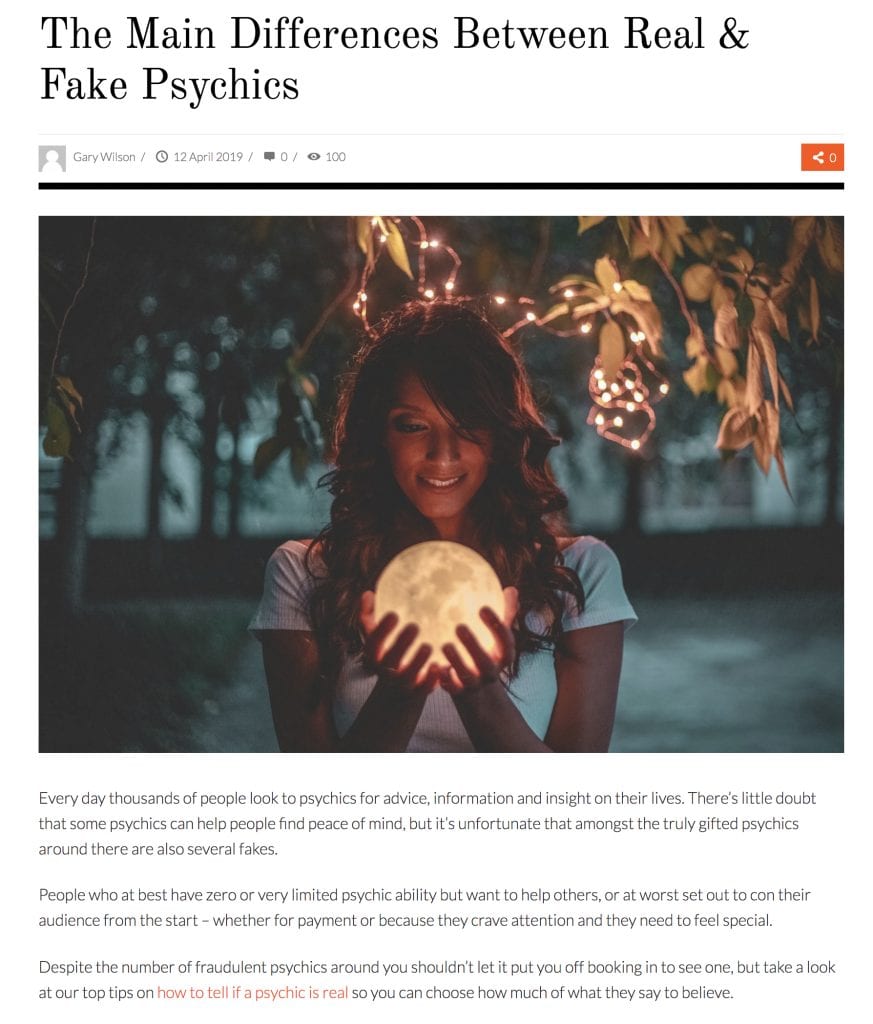 This article is interesting for several reasons including its pseudoskeptical and special pleading fallacy approaches. Here’s some of the tips it offers:

“True psychics are able to give you accurate and relevant information on specific things which are not obvious, for example, they may mention the exact full name of a person from your past, or a place you spent a vacation. Fake psychics cannot do that, instead they make general claims like: ‘I have an older man here, he passed due to a heart problem’, knowing that statistically it’s likely that a good number of people in the audience have lost someone who fits the bill.”

This reasonably accurate description of cold reading is followed up with, “In comparison, a real psychic may mention an older man, but they would add detail such as he passed on several years ago from a heart problem which he had known about but never told anyone. He says that’s the reason he quit driving, even though he blamed it on his eyesight.” But this still doesn’t really solve the problem, for various reasons. Merely adding the qualifier “he knew about but never told anyone” doesn’t help; how could a person know that the deceased knew about his heart problem if he never told anyone, or that that was the real reason he quit driving? It’s all more plausible speculation than confirmable fact, and because of flexible interpretation, the psychic’s client may think, “Well, he didn’t stop driving, but he may have thought about it,” thus seeming to confirm the information.

The article goes on: “Fake psychics speak slowly because they are fishing for clues.” This is incorrect, but the reason the author gives is correct in some circumstances: “They make a statement and then either read your body language or wait for your response to adjust their ‘insights’; making statements like: I can sense you have had heartbreak in your life. (Who hasn’t? If you are suddenly emotional or anxious they will ramp it up.) It’s very recent, but you have spirits with you, supporting you. (If you look blank they try a different tactic.)”

Many psychics, such as John Edward, speak quickly, while others don’t. The idea that fake psychics speak slowly to give them time to react and redirect responses is rarely true; a skilled speaker can do it in a second or less and doesn’t need to draw out the words or statements fishing for time. In fact most psychics speak quickly precisely because the more they say, the more potential bits of information and guesses they throw out, the more likely it is that something will catch someone’s attention and perceive it as meaningful. This is especially effective in a large audience, where the psychic on stage may not be close enough to the person (or the place may not be well lit enough) to read the microexpressions and body language. Speaking slowly would be of no help in those circumstances, so they adopt a faster, rapid-fire patter technique (I saw this first hand at several readings by Edward). 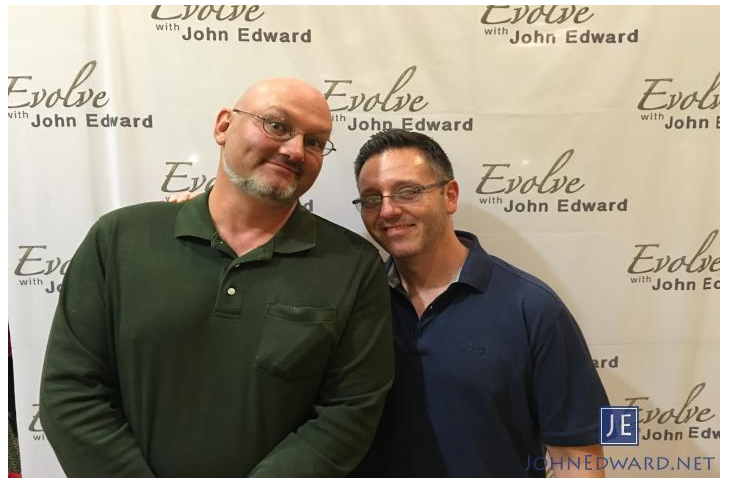 And finally, “Fake psychics demand cash to remove curses or spells. This is one of the ugliest aspects of fakery in the psychic sphere. People who feel they may be cursed following endless bad luck are vulnerable to suggestions that they could escape it if they pay for the curse or spell to be removed.” This is an excellent and valuable warning, though of course the best way to avoid these unethical “fake psychics” is to avoid all psychics….

Sometimes well-known psychics themselves help “warn” the public. In 2011 police outside of Houston, Texas, surrounded a rural farmhouse with guns drawn. They were acting on a tip from a psychic who told them that the property was the scene of a grisly mass murder: dozens of dismembered bodies would be found there, she insisted—including those of children. It all turned out to be false, and the story made international news. The Committee for Skeptical Inquiry was on the story almost immediately, getting the skeptical perspective out. I wrote a piece that appeared on MSNBC and the Christian Science Monitor, and Joe Nickell was quoted in The New York Times.

Within a day or two psychics were commenting about the skepticism and the whole fiasco—including a famous TV psychic named Carla Baron, who fumed on her blog.

She wrote that the woman “falsely reported a crime. She falsely claimed she had ‘psychic’ ability. THIS is precisely the irresponsible behavior I have pointed out previously in my official blog. Those who wish to ‘help’ – those that feel they have some sort of intuitive ability, those that are just simply lunatics looking for a little attention. This ‘psychic’ who called in the false tips to law enforcement is, in fact, not a psychic at all….. This behavior threatens to tear at the very fabric of any credibility displayed by AUTHENTIC psychics, mediums, and psychic profilers such as myself.” Baron then railed against journalists and skeptics—including myself—who mentioned her name in recent news articles about the failure of psychic detectives. She asks, “Why is it that most MEDIA outlets (and many lesser media – i.e., blogs, discussion forums, individual websites) find it necessary to use my famous name to promote their articles, commentary, and news pieces?”

The obvious answer is that if the subject of the news piece is psychic detectives who cannot solve cases and give false and useless information, then she is Exhibit A.

Baron was part of the TruTV show Haunting Evidence, in which she and two other investigators tackled real-life unsolved murders. The show was cancelled after 22 episodes without any of the cases having been solved; two were later closed through police work. The Independent Investigations Group did an excellent analysis of Baron’s claims and found a near-spotless track record of failure. Baron’s question would be like Tiger Woods wondering why he’s being mention in a news article on golfing.

Baron was concerned that all this negative publicity about psychic failures is leading to a modern witch hunt reminiscent of the Salem Witch Trials. No, seriously: “My mind is beseiged at the moment with images of the Salem Witch Trials of 1692. From June through September of 1692, nineteen men and women, all having been convicted of witchcraft, were carted to Gallows Hill, a barren slope near Salem Village, for hanging…..Is history not only repeating itself, but mutating into ardent new ways of  ’witch burning’?”

Baron was apparently fearful that she and other “real psychics” may be abducted by angry mobs, put on mock trials, and possibly hung or pressed to death in a public place. It’s not clear whether Baron was worried about “fake psychics,” like the woman who led police to the Texas house. Presumably the best proof of psychic powers (or witchcraft) would be a track record of amazing success and accurate information; in that case I don’t think Baron has much to worry about.

The Truth About Covid Parties