In a recent article in The New York Times, Sharon Otterman describes cyber flashing, in which objectionable images are shared anonymously to random available mobile devices using the AirDrop platform, as “a growing trend of technology-enabled sexual harassment,” though she later notes that “Danielle Citron, a professor of law at the University of Maryland and the author of a book on hate crimes in cyberspace, said that…. were no statistics tracking the prevalence of cyber flashing, adding the entire field of electronic harassment is ‘woefully understudied’” (emphasis added).

As I read the piece a simple question occurred to me: If there are no statistics on the prevalence of this trend, how could Otterman determine that it’s “growing”? Presumably to determine that you’d need at least two (and ideally more) data points: a base rate and a second measurement. No data means just that: no data. There are a few anecdotes and scattered reports of cyber flashing from major cities, but no systematic analysis has been done. Anecdotes, by themselves, are not evidence of a larger trend.

Otterman inferred that it was a “growing trend” from the fact that a bill was introduced to address the issue: “It has become so common that two lawmakers introduced a City Council bill on Wednesday to explicitly make it a crime, punishable by a $1,000 fine or up to a year in jail.”

Is the introduction of city council bills a valid metric, recognized by either social scientists or The New York Times, of the incidence or prevalence of a problem? I wouldn’t have thought so, and some quick research revealed examples suggesting otherwise.

There are many other examples, but it’s pretty clear that the introduction of a bill may represent the amount of attention a trend is getting, or the concern expressed among lawmakers, but it doesn’t represent how common it is. The September 11, 2001 attacks spawned reams of new anti-terrorism laws, but those laws didn’t come about because of the number of individual attacks; the laws weren’t proposed once a threshold number of attacks had been reached and they became “common.”

There are many examples of poorly-defined and measured “growing threats,” often involving sexuality and technology—as well as the danger to kids and teens. In their book Kids Gone Wild: From Rainbow Parties to Sexting, Understanding the Hype over Teen Sex, Joel Best and Kathleen Bogle examined the pattern of social media stories about sex panics: “In each case, claims were made that these new forms of sexual behavior [and] inspired a wave of commentary: Journalists, cable TV pundits, bloggers, and ordinary citizens repeated the claims (‘Do you realize what kids today are doing?’) and debated their significance.” 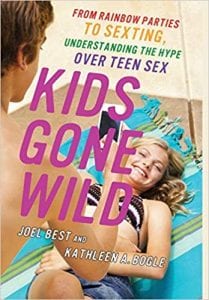 It was a scary and bizarre activity, a growing trend apparently pursued by clandestine sexual thrill seekers across Europe and perhaps around the world. Gavin Fernando, a reporter for the New Zealand Herald, tracked the origin of the stories to a Josep Mallolas, a Spanish doctor. Despite headlines suggesting that the medical community as a whole was aware of (and concerned about) this trend, Dr. Mallolas appears to be the sole source of the reports, though a second person identified only—and memorably—as “a Serbian stripper called Tijana” offered a corroborating anecdote in some news stories.

Then there’s the eyeball licking fad of 2013, where news stories warned of a dangerous new trend spreading among Japanese schoolchildren who lick each other’s eyeballs and supposedly spread the highly contagious disease pink eye.

To be clear, I’m not diminishing the threat of cyber harassment, nor suggesting that the likelihood of experiencing it is akin to killing a Bigfoot, having a sordid online pay-per-view deflowering, or getting pink eye from licking eyeballs. As Otterman noted, it’s a real and legitimate issue, something that we can verify has happened. She cited several anecdotes in the Times piece—but gave no evidence that it’s a “growing” threat, and the rationale she offered as evidence of its prevalence is frankly a non sequitur.

At first I thought I was perhaps just being pedantic over imprecise use of words such as “growing” or “common” but I can’t help but wonder if this is part of a journalistic trend of identifying new social threats, especially online, and claiming—despite little or no real data—that it’s a growing problem in order to justify its newsworthiness. Of course writing “This problem is going on” is likely to draw less eyeballs and clicks than “This problem is going on—and it’s getting worse, you should be concerned!” but it may be more accurate.

Had Otterman’s piece just left it with the quote from Citron (that no data is available), I wouldn’t consider it to be in error. But because it stated, without evidence, that it was both “growing” and “common,” I do believe it’s a factual mistake. Otterman did not respond to an email seeking comment or clarification about her reporting, but if she is correct that this form of cyber flashing is both common and growing, hopefully her reporting will spur some credible data collection.

When Anti-Vaccination Fears Come From Inside the House