Ryan Burge tracks attitudes toward the label “liberal” through the lens of church attendance. You will not be surprised to know that the more dedicated church-goers tend to be the ones who reject the label:

While over 40% of nonwhite weekly church attenders identified as liberal in the 1970s, that has now dropped to just 28%.

The decline for the most devout white Americans is more dramatic. While 21.6% of them were liberals in 1974, today it’s just 12.7%. … About 4 in 10 white Americans who never attend services described themselves as liberal, a percentage that has remained stable since the 1970s.

Former CFI president Ron Lindsay has a short story published at Havok, but it’s only available free on the website TODAY. So go read it!

After an Instagram influencer is revealed to be a sort-of fake (I know, what a shock), Tara Isabella Burton reflects on the spiritual underpinnings of publicly “living your best life,” writing, “It’s an impossible demand, but deeply rooted in American religious culture”:

Your best self still has to be you. It’s acceptable, advisable, even morally necessary, to spend your life in a series of optimization trials: undergoing diets and wellness cleanses and SoulCycle sessions and other forms of self-betterment.

But the second that your “best self” becomes too obviously an illusion — a construction of disembodied internet culture, a ghostwritten Instagram post or an overly FaceTimed selfie — its moral authority collapses. It’s no longer indicative of properly administered self-care, of a life curated with all the sweat-drenched purgation of medieval self-flagellation. It’s simply, well, a lie.

An ugly situation begets something better: Last year, a transgender student at a Virginia public school was left alone in a gym during an active shooter drill because staff didn’t know what locker room to put her in. Now, the school board has voted in response to adopt a sweeping non-discrimination policy. Shareblue reports:

The school board, with a 4-3 vote, updated its nondiscrimination policy to explicitly state that it will not discriminate on the basis of “race, color, national origin, political affiliation, religion, sex, pregnancy, childbirth or related medical conditions, marital status, mental or physical disability, genetic information, sexual orientation, gender identity, or any other characteristic prohibited by state and/or federal law.” The previous policy had only included protections based on “race, sex, age, color, religion, national origin, political affiliation, or disability.” By a similar vote, it also adopted an equal opportunity policy with similar language.

During the Democrats’ debate tonight on ABC, one ad you won’t see during the breaks will be FFRF’s ad with Ron Reagan Jr., as the network seems to have rejected it. It’s a three-hour debate, so go ahead and use that time to go to the bathroom instead.

This is grim. FiveThirtyEight reports on how we are SO not ready for climate refugees:

Rising sea levels, wildfires, drought or a slow-moving hurricane can all threaten your way of life as surely as a bomb. But unlike victims of war for whom the causes and effects of the threats are clear and codified, there are no protections for environmental migrants. That’s despite World Bank estimates that tens of millions of people could be climate refugees by 2050, research showing asylum seeking already increases in response to climate-related issues like rising temperatures…

A new Florida law requires that before doctors can prescribe an opioid drug for pain treatment, they must also offer some alternatives, including stuff that is straight-up pseudoscientific fake medicine.

Meanwhile, the U.S. is about to lose its “measles-free” status. Maybe we can be “measles lite.” Or “diet measles.”

At Adventures in Poor Taste!, Skeptical Inquirer columnist Kenny Biddle checks in on a “haunted comic shop.” Yeah, it’s not.

Trump spiritual adviser (cough cough wheeze cough) Paula White says she blessed the White House with the “superior blood of Jesus.” (Hemant: “So take that, Jews.”) Now all I can think about is how Dr. Octopus took over Peter Parker’s body and declared himself “The Superior Spider-Man,” which, you know, is a great series which I recommend. What were we talking about?

An amateur astronomer has discovered what is only the second known interstellar object to enter the Solar System, a comet called, poetically, “C/2019 Q4.”

Who knows, maybe C/2019 Q4 is from the same system as the newly-discovered, and equally well-named, exoplanet K2-18b! Yes, it’s being called a “super-Earth” like many other exoplanets, but they mean it more this time. Business Insider reports:

“This is the only planet right now that we know outside the solar system that has the correct temperature to support water. It has an atmosphere, and it has water in it, making this planet the best candidate for habitability that we know,” Angelos Tsiaras, the lead author of a paper on the finding, said in a press call. “We were extremely excited to see these results.” …

… K2-18b is ripe for continued study, since its water vapor is probably not going anywhere for a while, the researchers said. Its star is relatively inactive and hasn’t put out any flares since scientists started observing the system.

Plus, the planet’s atmosphere containing hydrogen also bodes well for the continued presence of water vapor — hydrogen is much lighter, so it would be the first molecule to go if K2-18b’s atmosphere were stripped away by radiation.

THIS IS NOT AN ENDORSEMENT OF A CANDIDACY, it’s a notable thing a candidate for the U.S. Senate tweeted. Iowa Democratic primary candidate Kimberly Graham said:

Shout out to @iowaatheist247, @Iowa_Atheists and all the “Nones” throughout the state.

I see you and pledge to respect the separation of Church and State. 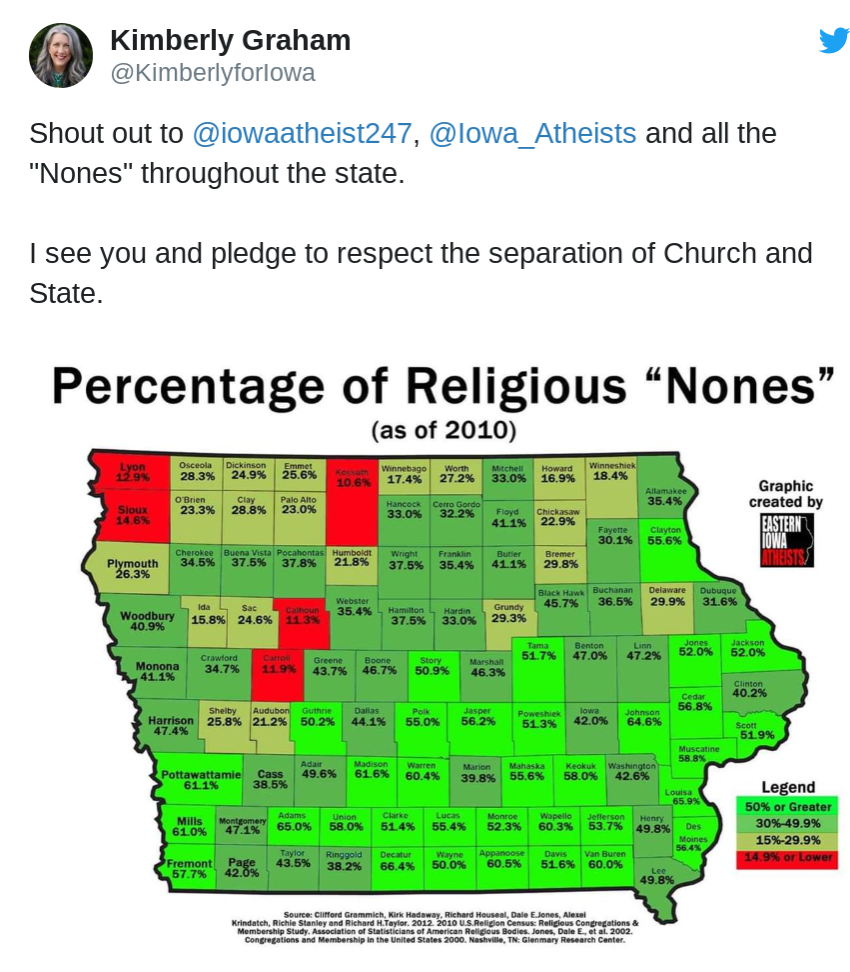