This past summer, I listened at the CFI conference to our colleague Stephen Law’s interesting take on an ancient philosophical problem for theists: the problem of evil. The crux of the problem is that, if there is a god, and it is all-powerful and all good, why does it allow evil to exist? I’ve written a bit about it in a tribute to my late mentor Peter Hare’s work on the subject in the Transactions of the Charles S. Peirce Society. In my article, I describe how Hare and his collaborator Edward Madden categorize three basic responses, what are called “theodicies,” that attempt to explain away the problem and argue for the simultaneous existence of evil and such a god. Law has another interesting approach to challenging the various theodicies which he calls the evil-god challenge.

The various theodicies attempt to explain how or why a god of the sort presumed to exist by most monotheistic religions could create a universe and creatures in it capable of evil. One familiar argument is that from “free will” (embraced in modern times by Alvin Plantinga, among others) which argues that the all-powerful god gave us free will, and that in order for it to be meaningful, there must be a choice of evil, and the choice rests with humans, not god.  Numerous other approaches exist, and I will conduct a course on theodicies in September as part of CFI’s online course offerings. Here I want to talk about H.P. Lovecraft, because his approach is I think another viable option.

Lovecraft was an author of horror stories, and never really achieved great success in his lifetime, but his work has heavily influenced modern science fiction and horror. His writing style is often turgid, his prose repetitive (count the number of time the word “blasphemous” appears through his work), and he is often sexist and racist. Regardless, he is now legendary. His influence on the culture comes, some have argued, from his standing uneasily between modernity and something quite pre-modern, almost ancient. Despite his penchant for horror, one could argue that there is very little “supernatural” about his works. The monsters that inhabit his universe are nearly all conceived of as being part of nature 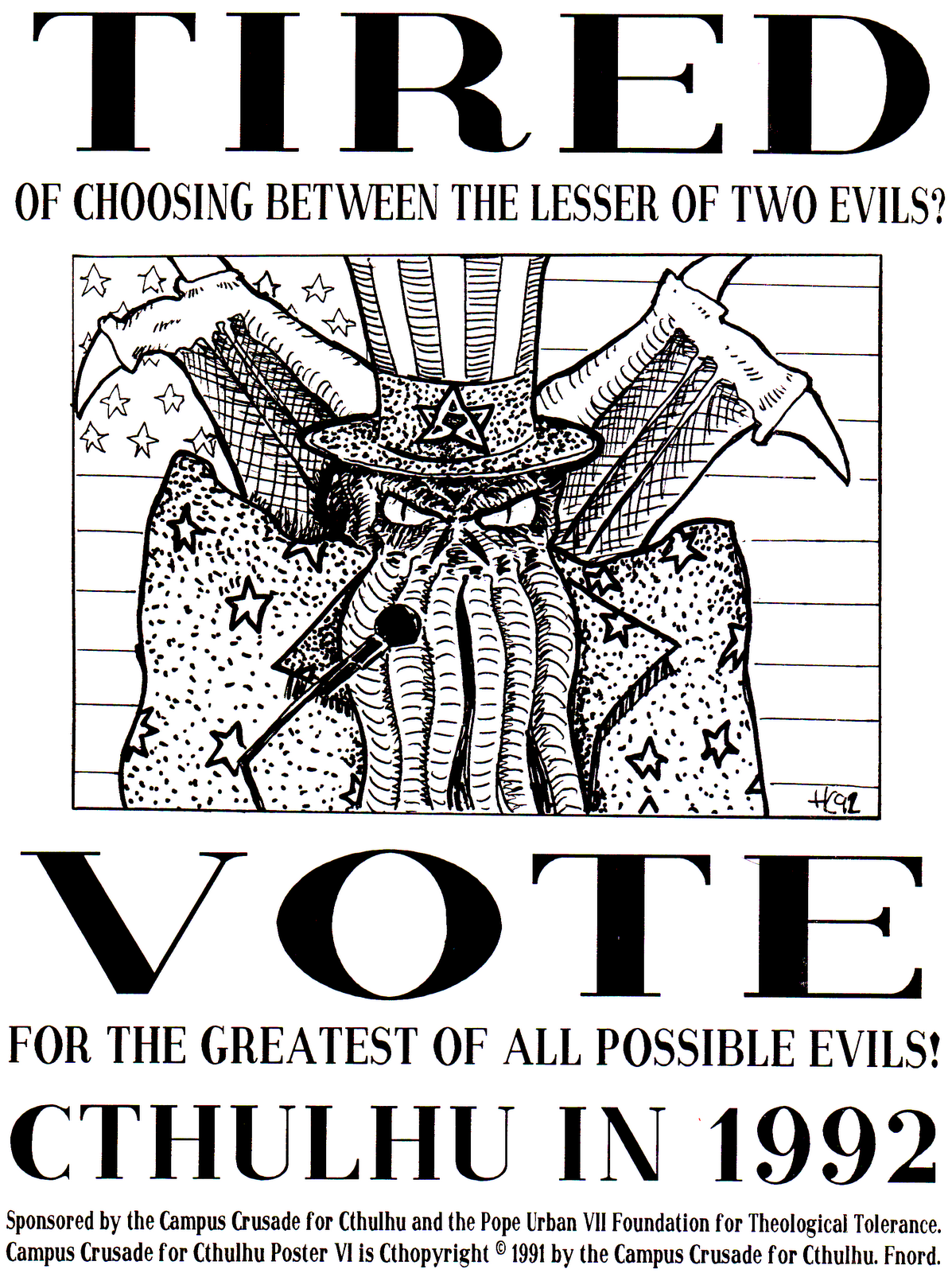 Once we become accustomed to the notion of an utterly natural, unimaginably enormous universe of an age we can scarcely fathom (I’m starting to sound like Lovecraft here), then the monsters that can be thought to inhabit it become nearly infinite. Lovecraft’s monsters are gods. The “great old ones” or “elders” that comprise his pantheon are physical creatures, very ancient, lost evolutionary dead-ends, extinct races and creatures that may or may not have come from other planets, but which humans worshiped as gods. The most well known of this mythos is Cthulhu, who is imagined as an enormous (hundreds of meters tall) creature with tentacles where a mouth should be, wings, flippers, claws, etc. He sleeps now under the ocean awaiting for his chance to return to the surface of the earth. The modern sci-fi equivalent might be something like the kaiju mythos underlying the Godzilla movies.

Infrequent in Lovecraft is some reference to modern Christianity. Unlike the standard horror fare where proper attention to Christian faith can protect us from devils, the Lovecraftian gods are utterly indifferent to humanity, except maybe as a sometimes accidental food source. While humans worship the great old ones, it isn’t clear that the Lovecraftian gods care whether they are worshipped or not, only that they are fed. In some way, the Lovecraft oeuvre is existential. The universe is too big, too impersonal, and utterly indifferent to our puny, human existences. Cthulhu and the old ones, the elders and all the monsters of the universe are only evil by our interpretation, just as ants (if they could) might consider us evil in our daily genocides of their kind as we walk so carelessly down the street.

The universe itself is a harsh place. Stars explode, asteroids impact, species come and go, and its indifference is embodied by Cthulhu. To us, this is horrible, this is evil. Perhaps it is just a matter of perspective, and we label too readily with terms delineating values things that occur without regard for intention. While humans can create such perspective, and choose to harm or not our fellow humans (and perhaps other sentient creatures) our perception of sentience itself might be limited. Cthulhu and the other Lovecraftian gods seem at times to barely even perceive us, going about their “lives” with little more regard for us than we have for flies, or rocks. This is the Lovecraftian theodicy. The great big horrific universe has no regard at all for us, our sentience, our pain, or our short lives. Cthulhu has absolutely no problem with evil. That’s only something we should care about, the gods clearly do not.