Donald Trump is widely known for boasting. He brags about his intelligence, his physical and mental health, his wealth, and pretty much anything else he can think of or in some tangential way take credit for.

But most of all, Trump loves to brag about how influential, adored, and popular he is. From his wildly exaggerated (and later debunked) inauguration crowd numbers to his poll numbers, Trump constantly reminds crowds and the public how much support he has (or claims to have).

In many or most cases, Trump’s exaggerations are pretty transparent. It’s no secret—even among his supporters—that Trump routinely engages in hyperbole. But in some cases Trump’s critics and journalists seem to have taken his statements at face value, especially those regarding his popularity and influence. If there’s one thing Trump and his critics can agree on, it’s how powerful and influential he is—even if he’s not.

One of the ways in which we can be misled into thinking that an idea is more popular or widely held than it actually is involves assuming that people must agree with whatever claims or information they’re seeing or hearing, otherwise they would protest or challenge it in the moment.

In mid 2018 a friend of mine posted on social media that she was feeling hopeless because “Donald Trump, who hasn’t set foot in a grocery store in his life, claims you need a photo ID to buy milk and eggs. This is what he said last night in Tampa: ‘You know, if you go out and you want to buy groceries, you need a picture on a card. You need ID.’ And the Trump cult members in the crowd, knowing he is lying because they have to shop for groceries, cheered him anyway.”

Why did people applaud Trump?

Clapping at his obvious lies, like zombies! See how brainwashed Trump supporters are!

I understand what she was trying to say, but the fact that (most of) the audience in a Trump rally applauded at a pause in his speech in which they were expected to applaud doesn’t indicate that they agreed with—or even understood—what Trump was talking about. It merely means they were following a well-established social convention. Maybe some assumed (as his press secretary belatedly and dubiously claimed) that he was referring specifically to buying alcohol or cigarettes. Maybe some weren’t really listening to exactly what Trump was saying.

Comedian Sascha Baron Cohen has built a career out of exploiting this normal human tendency in film such as Borat (2006) and television series including Da Ali G Show and Who Is America. Assuming a variety of strange characters and hiding his identity from his subjects, Cohen asks a series of odd and often convoluted questions, trying to elicit agreement with some outlandish premise such as arming toddlers. It’s a (sometimes) amusing “gotcha!” moment that reveals far less than it purports to; it says little or nothing about the person’s genuine beliefs or opinions and more about their lack of pop culture savvy.

While it makes a few points about the nature of America, it also demonstrates the tolerance and kindness extended to a clueless, daft foreigner by his American targets. As Christopher Hitchens (2006) noted, “Among the ‘cultural learnings of America for make benefit glorious nation of Kazakhstan’ is the discovery that Americans are almost pedantic in their hospitality and politesse. At a formal dinner in Birmingham, Ala., the guests discuss Borat while he’s out of the room—filling a bag with ordure in order to bring it back to the table, as it happens—and agree what a nice young American he might make. And this is after he has called one guest a retard and grossly insulted the wife of another (and remember, it’s ‘Americana’ that is ‘crass’). The tony hostess even takes him and his bag of shit upstairs and demonstrates the uses not just of the water closet but also of the toilet paper. The arrival of a mountainous black hooker does admittedly put an end to the evening, but if a swarthy stranger had pulled any of the foregoing at a liberal dinner party in England, I wouldn’t give much for his chances.”

Especially under the pressure of being on camera and in the spotlight, people who routinely correct others are seen as pedantic, and most people follow the Golden Rule of treating others as we would like to be treated; if we happen to misspeak we hope to be graciously forgiven (or at least diplomatically corrected), instead of gleefully mocked for our stupidity.

The same thing happens when people laugh at jokes, or what appear to be attempts at inappropriate humor. If an attempt at humor falls flat, most people will offer a courtesy laugh (or just politely ignore it) instead of openly challenging the speaker. The nature of humor and satire is that not everyone finds the same things funny, and when something is said it’s not always clear whether it was meant sincerely or in jest.

When Amy Schumer joked that Mexican men are rapists (“I used to date Hispanic guys, but now I prefer consensual”) many in her audience at the time laughed—or groaned—but few believed it suggested genuine racism on her part. It was only later when asked about it that she admitted it was inappropriate. Billy Bush infamously laughed in September 2005 when then-candidate Donald Trump bragged to him about his penchant for grabbing women, in an audiotape leaked in October 2016. In a December 3, 2017 opinion piece published in The New York Times, Bush recalled “Of course he said it. And we laughed along, without a single doubt that this was hypothetical hot air from America’s highest-rated bloviator. Along with Donald Trump and me, there were seven other guys present on the bus at the time, and every single one of us assumed we were listening to a crass standup act. He was performing. Surely, we thought, none of this was real.”

This is of course not to defend any of these speakers, but instead to shed light on the psychology of why otherwise thoughtful, intelligent people can appear to tacitly endorse self-evident nonsense that they may in fact entirely disagree with. The oft-heard phrase “silence equals assent” is not always true; just because a person politely nods or even applauds on cue doesn’t make them complicit in whatever is being said at the time. There are of course exceptions; when vice president Mike Pence mentioned Trump in a February 16, 2019 speech in Munich, Germany, he paused for applause that conspicuously did not emerge from the silent audience.

On June 30 2017, Trump signed an executive order to re-establish the National Space Council, which had been defunct since 1993. During the event Apollo 11 astronaut Buzz Aldrin had a brief and bizarre exchange: “We know what this is, space,” said the U.S. president. “That’s all it has to say: space. There’s a lot of room out there, right?” Trump asked Aldrin. “Infinity and beyond!” Aldrin replied, quoting astronaut Buzz Lightyear in the film Toy Story. Trump responded “It could be infinity. We don’t really don’t know. But it could be. It has to be something—but it could be infinity, right?” Trump spoke from prepared comments including “Today’s announcement sends a clear to the world that we are restoring America’s proud legacy of leadership in space… At some point in the future we will look back and say, ‘How did we do it without space?’” Aldrin visibly grimaced at this and several other bizarre Trumpian nonsequiturs, but remained silent. The fact that Aldrin did not step forward and interrupt the president to refute the nonsense he was hearing does not suggest that he agreed with anything he was hearing. In fact his facial expressions told much of the story. 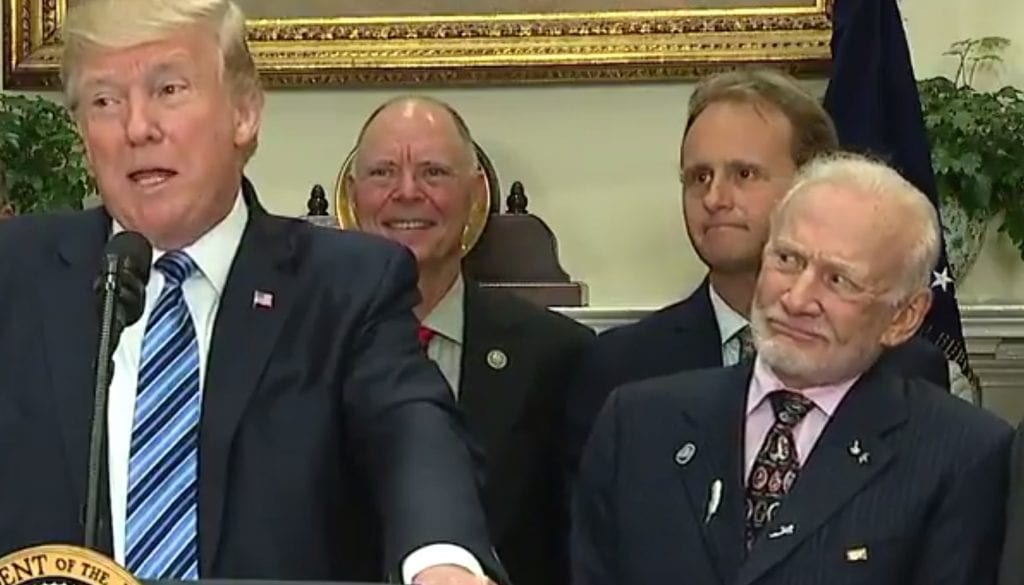 At Christmas 2018 Trump told American troops in Iraq that he had given them a 10% raise, the first one in over a decade: “You just got one of the biggest pay raises you’ve ever received. You haven’t gotten one in more than 10 years—more than 10 years. And we got you a big one. I got you a big one.” At this the soldiers cheered, although they knew first hand that what Trump said was false; not only had Trump not authorized a pay raise of 10% as he claimed, but in fact American troops have received automatic pay hikes every year for decades.

Just as audiences who applaud for speakers at speeches, graduations, and lectures aren’t implicitly personally endorsing everything (or even anything) that the person actually said, comments like this wrongly imply that the speakers enjoy broader support than they actually do. Social decorum should not be confused with positive affirmation of whatever was just heard. In fact following an appearance by Vice President Pence aboard the USS Harry S. Truman in late April 2019, Navy soldiers reported that they were instructed to “clap like we were at a strip club” for Pence. (The ship’s public information officer confirmed the comments to CNN and characterized the instruction as “inappropriate”).

In his book The Elephant in the Room: Silence and Denial in Everyday Life, sociologist Eviatar Zerubavel (2006) notes that “much of what we are expected to ignore is socially articulated in the even milder form of tact… Ignoring someone’s stutter, heavy accent, bad breath, or open fly out of politeness is clearly not the result of simply failing to notice it… These are all socially expected displays of ‘civil inattention.’ Aside from the pressure to see and hear no evil, there is a strong social pressure not to acknowledge the fact that we sometimes do indeed see or hear it. Not only are we expected to refrain from asking potentially embarrassing questions, we are also expected to pretend not to have heard potentially embarrassing ‘answers’ even when we actually have. By not acknowledging what we have in fact seen or heard, we can ‘tactfully’ pretend not to have noticed it. Being tactful, in other words, often involves pretending not to notice things we ‘know but realize that we are not supposed to know’” (p. 30-31). In this light, the presumed assent of those who hear false, absurd, or self-evident nonsense but remain silent—especially in the moment—is a faulty assumption.

Though simple and transparent, this technique has fooled many on social media, as well as some (otherwise seemingly media-savvy) skeptics and journalists. To choose only one of many examples, Sinead Baker, writing for Business Insider, offered a headline that read, “Trump told a cheering NRA crowd that the US is withdrawing from a UN treaty that regulates the global arms trade.” The headline’s obvious implication: the “cheering NRA crowd” must have firmly approved of Trump’s decision. Of course no one took a poll of the crowd to determine whether the public cheering reflected the genuine beliefs and endorsements of the NRA members in attendance. 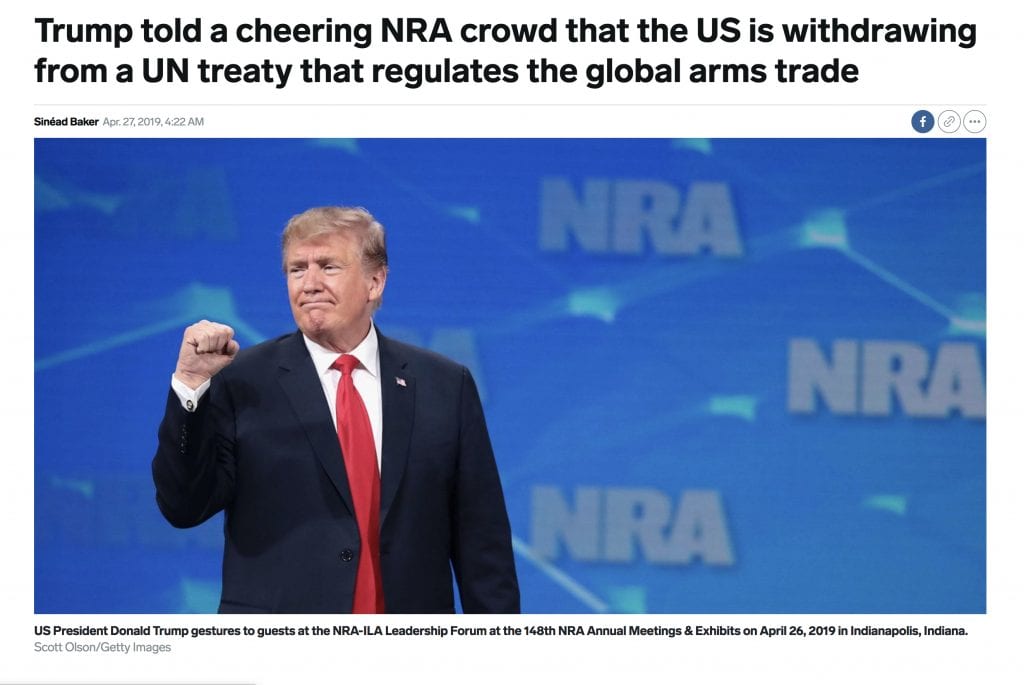 It’s easy to mistake cheering crowds for genuine support, but a bit of media literacy debunks this claim. (That’s one reason why live television shows have APPLAUSE signs to cue their audiences, and taped ones have “laff tracks” to give the illusion that some real human, somewhere, thought that joke was hilarious.) As Public Enemy’s Flava Flav famously said decades ago, “Don’t believe the hype!”