Wendy Kaminer comes to Women in Secularism to express a concern for the fate of free expression, not in places like Bangladesh or Pakistan, but on U.S. college campuses and in the broader discussions of social justice online, in academia, and elsewhere. A free-speech stalwart herself, authoring a magazine piece on atheism as “the last taboo” that was formative to this writer, Kaminer tells this conference full of the irreligious that free speech and freedom of and from religion are “inextricably linked,” and warns that there exists now there is a “progressive retreat from free speech.”

It’s an extremely touchy issue here, I’m not going to sugarcoat it. Straightaway, it was clear that some folks in attendance were in full agreement with Kaminer, and others were aghast. Everyone, I think, has similar aims: a free exchange of ideas without anyone being oppressed or harmed. How we get there, well, there are some very different ideas about that, and the emotions on this topic run very high in both directions. One way to think about these differences that Kaminer posited was new to me, that those who seek social justice are results-oriented (working toward a specific, tangible end), while civil libertarians, the free-speech absolutists, are process-oriented (more concerned with the structure within which goals are pursued).

Kaminer says what we now have is an environment which has “encouraged generations of graduates to mistrust free speech as they go out into the world,” as hateful speech is treated as conduct rather than words. And if that’s the paradigm, Kaminer says, where unwanted speech is considered an aggression, where it is equated with violence, we wind up justifying violence as a response to bad speech. 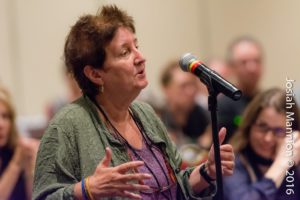 Things became even more interesting when celebrated veteran journalist Katha Pollitt, who will be speaking later herself, asked Kaminer to take into account the “constant barrage of low level harassment in public society” that women face, harmfully affecting their everyday lives in practical ways. How, Pollitt asked, are they expected to deal with this? Suck it up?

Kaminer agreed with Pollitt’s characterization of the state of things, and said she was less concerned about policing of real *macro*-aggressions as opposed to people, particularly women, being told in advance, “You will be traumatized by this, you will be intimidated by this. and if you are not, you are in denial.” And the only way out, Kaminer said, was to make this coarsened behavior less socially acceptable.

Nothing was settled here, of course, but I have to say as an observer, I was pleased that despite some of the very intense disagreements that clearly exist here, those disagreements were handled in a measured, respectful way, an acknowledgment I think that we all know we’re still figuring this out.