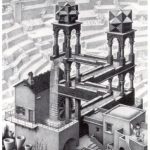 A guy who thinks. Or at least thinks he thinks. Maybe if I were smart I would know. I just don't know. Hopefully I can get some help with this issue here.