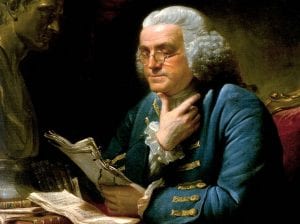 The worsening COVID-19 crisis in the United States is attributable to several factors, not least of which is the abysmal response by the federal government and the outright denial and misinformation peddled by the President of the United States. But it is also undeniable that efforts at all levels to slow and stop the virus’s spread are badly hindered by everyday Americans’ confusion and misunderstanding about the basic facts of the pandemic.

The American Philosophical Society, founded by Benjamin Franklin in 1743 to “promote useful knowledge,” is urging Congress to take deliberate action to address this. “Rather than the deliberative, logical and analytical thinking that the country urgently needs,” they write in a letter to congressional leadership, “we find a disturbing skepticism toward evidence-based policy-making; a reluctance to accept and apply scientific knowledge; and a lack of familiarity with the relevant lessons of history, including long-past and more recent pandemics.”

Signed by the American Philosophical Society President Linda Greenhouse, the letter calls upon Congress to enact legislation that would invigorate American education and focus institutional efforts to teaching critical, evidence-based thinking. A “National Defense Education Act for the 21st Century” would “support at all levels the education of America’s youth in science, history, analytical thinking, and the primacy of facts as the foundation of the nation’s future health, general well-being, and security.”

The principles outlined by the American Philosophical Society are, of course, at the very core of what we strive for every day at the Center for Inquiry, which is why we are sharing this with you here on our own website. Beyond even the immediate crisis of the COVID-19 pandemic, a lack of critical thinking and disregard for reason and evidence needlessly exacerbate countless challenges, such as those posed by global warming, conspiracy theories, snake oil peddlers, fundamentalist dogma, racial and sexual prejudice, and myriad other forms of science denial and the rejection of reality.

We strongly support any effort to bring evidence-based thinking to the forefront of American education. It is incumbent upon our lawmakers to take this seriously, and we will do all we can to help them understand.

You can read the American Philosophical Society’s letter in full below.

No Religion! No Anything!