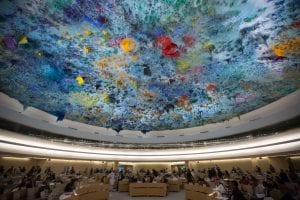 Andreas Kyriacou, United Nations Advocate for the Center for Inquiry, delivered two separate statements to the UN Human Rights Council on September 20, 2019. There, he called on the governments of Qatar and Brunei to “catapult themselves into modernity” by granting their people fundamental human rights and ending their laws against apostasy and blasphemy.

Video and text of Andreas’s statements are below.

Oral statement on the Qatar UPR

In its presentation to the reviewers Qatar stated “the promotion and protection of human rights were at the forefront of the State’s priorities and constituted the cornerstone of its comprehensive reform policy.”

We commend that Qatar has accepted the recommendation to “remove existing restrictions on the free exercise of freedom of religion and belief.” As a consequence the country should scrap its anachronistic apostasy and blasphemy legislation.

Sadly, of the 270 recommendations made by other countries – many dealing with the granting of freedom of assembly and expression – Qatar has rejected over a third. This unwillingness to grant its citizens and inhabitants essential civil liberties contrasts sharply with the missionary presence of Qatar-funded fundamentalist religious organisations all over the world.

Qatar-based state or privately run entities take it for granted that they should be able to present their often strongly anti-democratic and human rights violating beliefs everywhere. It’s overdue that Qataris are also given the opportunity to express their own ideas and be granted full freedom of religion or belief, including the right to renounce Islam.

Oral statement on the Brunei UPR

This April Brunei introduced a revised Sharia-based Penal Code. Instead of removing sanctions against actions, which should not be treated as crimes, the country has tightened its human rights violating legislation.

Brunei remains one of the just over two dozen countries penalising apostasy. Furthermore, its blasphemy legislation punishes peaceful criticism of religious ideas and outlaws all publications considered to be contrary to State recognised religious laws.

These antimodern laws clearly discriminate against atheists and other nonreligious people and suppress individual freedoms.

At the same time, the Brunei Investment Agency and the country’s absolute monarch invest heavily in high-tech enterprises all over the world. It is time that Brunei catapults itself into modernity also with regards to valuing human rights and guarantees its people freedom of expression and freedom of religion or belief.

Help CFI fight for freedom of expression and belief around the world!