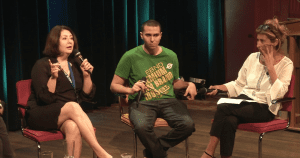 An incredible array of human rights activists gathered in Amsterdam last month for a conference on the freedom to think differently, the freedom not to believe, and the freedom to be yourself. The Celebrating Dissent Festival featured lectures, theater, poetry, film, protest, and comedy on the advance of free expression with a focus on how oppressive regimes and dogmas harm women, nonbelievers, and people who are LGBTQ. The event was a collaboration between the hosts, the De Balie institute, and Maryam Namazie of the Council of Ex-Muslims of Britain, whose work is supported by the Center for Inquiry.

Many of the participants would be well known to those who follow CFI’s international advocacy, including Sarah Haider and Muhammad Syed of the Ex-Muslims of North America; Ali Rizvi, author of The Atheist Muslim; Freedom From Religion Foundation copresident Annie Laurie Gaylor; singer-songwriter Shelley Segal; and many more, with more than 50 speakers hailing from 30 countries. Amsterdam’s mayor, Femke Halsema, opened the festival by welcoming “heretics, infidels, and renegades.”

A wide range of issues were confronted in sessions such as “Women’s Dissent,” “Comedy, the Sacred and Islamophobia,” “Separation of Religion from the State,” “Women against Gods,” “Fighting the Far-Right,” and more. As Namazie said after the event, “Speaker upon speaker showed how some of the most vibrant responses to fundamentalism have come from the universal desire for freedom—especially where survival has become synonymous with challenging religion and the religious-Right.”

Learn more about the event and watch videos from several sessions here.

An Immense Amount of Ignorant Familiarity