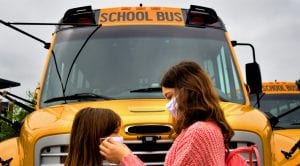 If you’re a parent of school-age kids, you already know how hard the next few months are going to be.

Our public education system is facing unprecedented challenges as teachers, administrators, students, and parents prepare to reopen schools during a global pandemic. Public schools are already hurting for resources, but even at this time when they most need support from the federal government, private and religious schools are poised to rake in billions from pandemic relief measures.

We’re not okay with that. The Center for Inquiry is leading a coalition of major freethought organizations telling Congress to prioritize public education over unaccountable religious private schools.

Ninety percent of America’s students attend public schools, which are open to all and discriminate against no one. But opponents of public education, led by Education Secretary Betsy DeVos, are using this crisis as an opportunity to divert taxpayer dollars away from public education and into private religious schools, schools that are free to discriminate in hiring and to choose which students to admit—whether they need the money or not.

At least two of the pandemic relief bills being considered by Congress contain massive giveaways to private religious schools, allocating billions of taxpayer dollars that could be spent on bolstering public schools as they wrestle with extraordinary challenges regarding health, safety, scheduling, budgeting, and operations. Plus, private schools already received hundreds of millions of federal dollars from the Paycheck Protection Program. Public schools were ineligible for those funds.

Sectarian schools exist to inculcate children from a particular religious viewpoint, which means they shouldn’t be getting any funding from taxpayers. The pandemic doesn’t change this bedrock principle. Public schools provide a secular education for children of all backgrounds, and they need our support now more than ever.

All the Properties of a Parasitic Virus