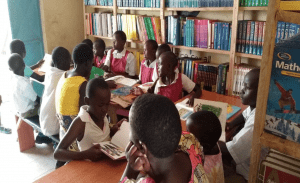 Editor’s note: CFI Kenya, one of the Center for Inquiry’s international branches, is a source of incredible pride and inspiration, running initiatives such as the Humanist Orphans program, a campus outreach office at Maseno University in Kisimu, and the Ron Lindsay Library, named for CFI’s former president and CEO. This article comes from CFI Kenya’s own newsletter, The Humanist Kenya, focusing on their library work.

When the former President and CEO of the Center for Inquiry, Ron Lindsay, officially opened the Humanist Orphans Resource Center in 2015, it became one of the unique initiatives in the village. This was because there were no places that could empower the community members by exposing them to resources like computers and reference books. With no electricity in a good number of homes, owning a computer is still considered luxurious in Kabar village. Internet connectivity is still not strong, which means most of the people in the village are still technologically marginalized. Our vision was to try and bridge that gap by exposing them to technology, teaching them computer skills, and giving them the opportunity to enjoy the global village of the internet.

Unlike urban areas, where the government has set up libraries, finding a library in a village like Masogo is difficult and pupils and students only rely on the books provided to them by schools. The disadvantage of focusing only on curriculum books is that students do not get exposed to books that can expand their thinking beyond the curriculum; this has brought the nightmare that Kenya’s educational system is currently facing.

One of the realities that hit Kenyan schools is the poor curriculum that was developed long ago, the 8-4-4 system, only meant to make students be industrial workers with no room for extend- ed reading or creativity. The problem is that since the old curriculum was based on academic results rather than extended knowledge, students only read to pass examinations, not to acquire skills and knowledge. It saw the rise of examination cheating since students no longer wanted to read for knowledge but to find shortcuts to passing exams. It prompted the Kenyan government to change the curriculum aimed at promoting creativity and critical thinking skills. The new curriculum, the 2-6-3-3-3, will replace the old curriculum that has been used in Kenya for about 32 years.

Reading is one of the basic abilities that children need to succeed in life. Developing good reading habits is important not only in academia but in daily life for children’s futures. Promoting a reading culture is vital since it opens up the mind to critical thinking and enhances creativity.

Opening a library stocked with books was a difficult task, but we believed this was a cause that was needed in the rural village to give them alternative views through skeptical books. We worked hard to solicit books through the help of the Center for Inquiry and other individuals who donated some books. The response was good and we were able to stock the library within three months.

The library is stocked with books of all kinds, including humanist books. Our vision is to offer books that open the minds of the villagers, helping them to be critical and rational thinkers.

We have very good programs within the library. First, we have a session with children who still do not know the alphabet and we teach them to acquire the skills before they start kindergarten. The aim of this is to let these children grow, knowing the importance of reading

Apart from that we have a reading program where pupils and students come to read story books. Afterwards, we give them questions on what they have read. We then put them into groups for discussion about the knowledge they have acquired. It helps them to learn the basics of team work and engage in debates about their interpretations of some of the books they have read.

Once in a while, we rent projectors and invite the villagers to watch free documentaries that promote science. For example, we have aired some of the episodes of Cosmos: A Spacetime Odyssey. The aim is to make them appreciate science and gain critical thinking skills.

Keeping Churches Open Will Damn Us All