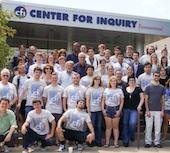 The 2014 CFI Leadership Conference wrapped up last weekend, and it was the kind of event where the connections formed and the skills learned exceeded expectations. Student freethought leaders, community activists, and CFI branch leaders came together to workshop, train, network, and generate ideas for advancing the causes of science, reason, and secular values at the campus, local, national, and international levels.

There were too many highlights to fully capture in this space. Some moments that did stand out, however, included a conversation with secular activists in Kenya and South Korea over an online video chat; Eric Adriaans and Sergio De Lara’s impressive presentation on a newly energized CFI–Canada; the hands-on training from experts like Desiree Schell, Michael De Dora, and Michael Cardus; the inspirational talks from James Croft, CFI president Ronald Lindsay, and Board Chair Eddie Tabash; and comedian Leighann Lord’s unique and hilarious wit.

And there was so much more (including ice cream). Definitely check out the photos from Brian Engler and Monica Harmsen (parts one and two). It was a weekend that left all who attended with a trove of skills, strategies, and best of all, optimism for bringing about a new wave of positive change. We can’t wait for next year.