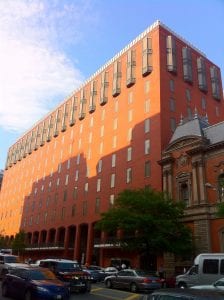 CFI’s Director of Government Affairs, Jason Lemieux, organized a meeting on November 25 with staff at the White House’s Office of Information and Regulatory Affairs (OIRA) at the Office of Management and Budget (OMB). We had come to discuss our serious concerns with pending regulations that would remove protections against religious discrimination in services provisioned by federally funded, “faith-based” organizations. The meeting was also attended by representatives from the American Humanist Association and American Atheists.

The protections in question were established by regulations instituted by the Obama administration. Among them are the right to an alternate service provider of similar quality for beneficiaries who object to the religious character of the faith-based provider, as well as the requirement for providers to give beneficiaries a written notice of their rights prior to receiving services.

The meeting included representatives from the Departments of Veterans Affairs; Labor; Education; Housing and Urban Development; Health and Human Services; Justice; and the United States Agency for International Development.

Regrettably, OMB is currently rushing the process to remove these anti-discrimination protections, and they have cancelled similar “listening sessions” with other organizations, including interfaith groups. We were fortunate to have had the chance to make our community’s voices heard on this important issue.