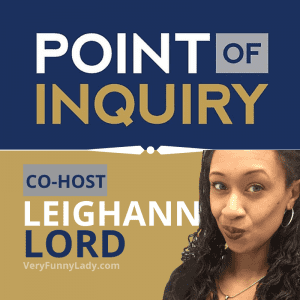 Beloved by audiences for her standup comedy that has been featured on programs such as Def Comedy Jam and The View, Leighann is particularly familiar to fans of science and reason, having served as co-host of the Emmy-nominated StarTalk with Neil de Grasse Tyson, and headlining numerous humanist and skeptic conferences and events. She has been the face of the Center for Inquiry’s African Americans for Humanism and Living Happily Without Religion campaigns, and served as host of CFI’s 2019 CSICon skeptics’ conference in Las Vegas.

She is also the author of Leighann Lord’s Dict Jokes: Alternate Definitions for Words You’ve Probably Never Heard of But Will Definitely Never Forget (Volumes 1 and 2) and Real Women Do It Standing Up: Stories From the Career of a Very Funny Lady.

For her first episode with Point of Inquiry, available now, Leighann talks to Kurt Andersen, former host of Studio360 and author of Fantasyland: How America Went Haywire: A 500-Year History. They discuss what forces led Americans to become untethered from reality, and how that history can help guide us through the misinformation and bewilderment of the coronavirus era.

Leighann will alternate hosting duties with current Point of Inquiry co-host Jim Underdown, an actor, comedian, musician, and freethought activist who has led the Center for Inquiry-West in Los Angeles since 1999. Jim has appeared on numerous radio and TV shows including Dr. Phil, Miracle Detective, Penn and Teller’s Bullshit, and The Oprah Winfrey Show, among many others, and runs CFI’s Investigations Unit. Point of Inquiry is produced by CFI digital marketing strategist Mike Powell.

Since 2005, Point of Inquiry has been the flagship podcast of the Center for Inquiry, an organization that seeks to foster a secular society based on reason, science, humanist values, and free inquiry. Previous guests have included Neil deGrasse Tyson, Ta-Nehisi Coates, Ann Druyan, Steven Pinker, Paul Krugman, Sam Harris, Jennifer Michael Hecht, Margaret Sullivan, Daniel Dennett, Chris Hayes, Temple Grandin, Elizabeth Kolbert, Richard Dawkins, and dozens of other luminaries who have introduced tens of thousands of listeners to new and challenging ideas.

Point of Inquiry is available on all podcast services, including Apple Podcasts, Spotify, Stitcher, TuneIn, and Google Podcasts.