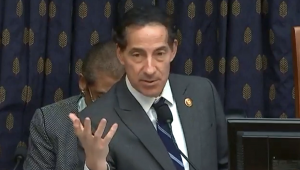 Religious persecution around the world was the focus of a joint hearing of two House subcommittees on Tuesday, January 28, and the Center for Inquiry took the opportunity to push for the support of bipartisan resolutions calling for the global repeal of blasphemy, heresy, and apostasy laws.

Rep. Jamie Raskin, who introduced the House version of the resolution, submitted CFI’s statement to the committee into the official Congressional Record. In our statement, CFI recounted the horrors visited upon both activists and everyday citizens accused of making any statements that contradict or question state-endorsed religious sentiments, and how our Secular Rescue program is overwhelmed with requests to help these imperiled individuals find safety.

“Any prohibition on criticizing or repudiating religion is a stain on our freedom—our freedom to inquire wherever our curiosity leads us, to express what we find there, and to openly worship any god or no god at all,” the Center for Inquiry told the members of the committees. “Ideas don’t need rights. People do.”

The resolutions supported by CFI, H.Res. 512 and S.Res. 458, declare that ‘blasphemy, heresy, and apostasy laws inappropriately position governments as arbiters of religious truth and empower officials to impose religious dogma on individuals or minorities through the power of the government or through violence sanctioned by the government,” and calls on the President of the United States and the Secretary of State to prioritize the repeal of these laws in their dealings with countries who keep them on the books.

The resolutions also call upon the administration to oppose any efforts by international bodies to create “an international anti-blasphemy norm,” as are often proposed by groups of countries under the guise of laws against “defamation of religion.” Just as importantly, the resolution addresses those governments that have a record of persecuting and prosecuting their people with blasphemy laws to unconditionally release any who are currently being held for such charges and to “ensure their safety and that of their families.”

The full text of CFI’s statement for the Congressional Record can be read below.

The Center for Inquiry (CFI) appreciates this opportunity to submit a statement for the congressional record regarding the urgent need to repeal criminal prohibitions on blasphemy, heresy, and apostasy in all countries where such laws exist.

CFI is an educational and advocacy organization that seeks to foster a secular society based on science, reason, and secular values. Among these secular values is the right to freedom of and from religion as guaranteed by the U.S. Constitution’s Establishment and Free Exercise Clauses. CFI’s vision is a world where people value evidence and critical thinking, where superstition and prejudice subside, and where science and compassion guide public policy.

CFI operates a program, Secular Rescue, that assists imperiled writers and activists abroad who are persecuted for their work to promote equality for nonbelievers, atheists, and secularists. In 2019 alone, Secular Rescue assisted approximately 170 people who were seeking safety from persecution and violence. Although Secular Rescue receives thousands of requests for assistance each year, it has the resources to assist only a fraction of those. A tragedy of this scope and scale can only be resolved with a concerted effort from states and international organizations.

According to the United States Commission on International Religious Freedom (USCIRF), criminal prohibitions on blasphemy are codified in eighty-three countries on every continent except Antarctica. In thirteen of these countries, blasphemy is punishable by death. As a result of these unjust laws, persons who exercise their freedom of expression by making public statements contradictory to popular or state-endorsed religious sentiment face serious, often deadly, persecution. This persecution can manifest as vigilantism, state coercion, or both. The clients helped by Secular Rescue face credible threats of violence up to and including death. Virtually all are forced to flee their home countries secretly and in haste, at risk of physical abuse, imprisonment, or murder.*

Often, Secular Rescue’s clients are fleeing persecution in countries in which governments are not able or willing to curtail deadly vigilantism. Secular Rescue clients frequently face attacks and persecution by private entities acting with the knowledge or complicity of the government. In this absence of the rule of law, vigilante groups can develop into entities capable of and willing to coordinate across numerous national borders to track and murder their targets. As a result, Secular Rescue clients are often forced to transit numerous countries to escape the threat of nonstate vigilantes who attempt to track across national borders, and even entire regions, to kill them.

The following summary describes a recent case in which Secular Rescue assisted two individuals fleeing persecution for blasphemy. All names have been changed to protect the innocent.

Hakim and his cousin Hassan are from a country in central Asia. They are currently in hiding in another country more than 1,500 miles from their home. Hakim, a well-known blogger in his home country, was incarcerated and tortured by national authorities before both fled upon Hakim’s release from prison to their current location. As one of its priority cases, Secular Rescue is exploring all possibilities to help Hakim and Hassan, including with their asylum appeal.

Hakim reported last year that they were granted an extension of stay in their host country for up to six months. Secular Rescue is seeking a volunteer to host Hakim and Hassan in a third country in the event that their second asylum appeal fails. If Secular Rescue is able to identify a willing host, it will need to raise at least $25,000 in sponsorship funds to cover the short-term expense of hosting Hakim and Hassan.

In October 2017, the Ministry of Interior in our host country refused our asylum claim so we appealed, which was turned down by the municipal court, so we appealed yet again. In 2018, an appeals court upheld the earlier decision. We faced immediate threat of deportation to our home country, where I have been declared an apostate [a “crime” punishable by death] and a terrorist by a judge of the provincial High Court. Since then, our host country has extended our stay for another six months.

I had renounced my … faith around eight years back, however, I came out of the closet on Facebook and social media as an apostate five years ago. I ran a blog, a Facebook page (removed by Facebook upon government request), and a Twitter account. Since I was an activist in my hometown, I decided to raise awareness about the hazards of religion … through my Facebook page and Twitter account. Soon after, I started receiving graphic death threats.

In June 2014, my Facebook page was deemed “blasphemous” by the government and banned in the country. I created another two Facebook pages and carried on. In 2015, the social media cell of a prominent fundamentalist religious terrorist organization put a price on my head via his official Twitter account for my Facebook posts, blogs, and tweets.

In 2017, I was kidnapped by my home country’s intelligence service and taken initially to a torture facility, then moved to another torture facility where I was horrifically tortured. Both hands handcuffed on back with one hand over the shoulder, they beat me with a long studded leather strap, sodomized me with a metal rod, and hammered a nail into my foot and in the knee where I had suffered a childhood injury. I was eventually freed after three weeks of agony. But to my horror, I found out that ahead of my release they had already announced on national TV as well as social media that I was a blasphemer and infidel and I should be killed.

Fearing for my life, I fled with my cousin Hassan, also an apostate, to our current host country where we applied for asylum. We now face immediate threat of deportation to the country that was once our home. My passport, which that country refuses to renew, expires in 2020.

In closing, CFI unreservedly supports H.Res. 512 and S.Res. 458. The United States should leverage its position of global leadership by using all feasible measures to actuate the repeal of criminal blasphemy laws in the eighty-three countries where such prohibitions are codified. We hope that the passage of H.Res. 512 and S.Res. 458 in their respective chambers of Congress will be swiftly followed by active measures by the Department of State to convince the relevant countries to eliminate these anti-religious-freedom criminal blasphemy laws.

Any prohibition on criticizing or repudiating religion is a stain on our freedom—our freedom to inquire wherever our curiosity leads us, to express what we find there, and to openly worship any god or no god at all. Ideas don’t need rights. People do.

* See, for example, the case of Avijit Roy, a secular activist who in April 2015 was tracked and murdered in Dhaka, Bangladesh, by Islamist vigilantes. Roy was murdered by machete in broad daylight in full view of Bangladeshi police, who did not intervene.

Keeping Churches Open Will Damn Us All