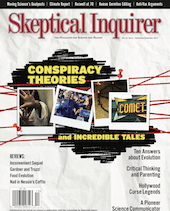 In the cover feature on conspiracy theories, sociologist Jeffrey S. Debies-Carl follows the infamous “Pizzagate” fake-scandal of the 2016 election, a right-wing conspiracy theory that asserted that the Clintons and their associates were operating a child-sex ring out of a Washington, D.C., pizza parlor.

“Legends, just like fake news, can lead to real-world consequences,” writes Debies-Carl, showing that Pizzagate is an example of a lie evolving into a full-blown legend, so much so that it led to “legend-tripping,” in which a person tries to enter into the legend itself. That’s just what happened when one of the legend’s adherents took it upon himself to grab an assault rifle and head to 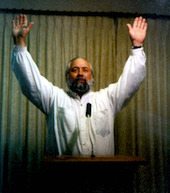 the pizza joint to “rescue” the fictional children.

This issue also includes Eric Wojciechowski on the phenomenon of already-accomplished people feeling the need to embellish their life stories into something fantastical; Bertha Vazquez and Christopher Freidhoff answering some key questions about the teaching of evolution; and Skeptical Inquirer Editor Kendrick Frazier marking the 70th anniversary of the Roswell UFO incident…plus a lot more.

The December 2017/January 2018 issue of Free Inquiry takes us from conspiracies to cults. Joanne Hanks escaped a life entrapped by the True and Living Church of Jesus Christ of Saints of the Last Days (TLC) seventeen years ago, and with the help of Steve Cuno muses on the properties of cults, which can range in destructiveness from Amway to Jim Jones. Primarily, Hanks offers a kind of tongue-in-cheek how-to for becoming susceptible to the call of the cult. “If your life’s dream is to become or to raise prime cult-bait, [this] is for you,” she says, clarifying, “I’m talking about the kind of cult that dictates your identity, what you will think, and how you will act, all to an absurd level of intrusion.”

This issue also features a remarkable and sobering look at the power of the John Templeton Foundation, which Free Inquiry Editor Tom Flynn reveals “cuts a mighty swath across fields from science to psychology, ethics to religion.” Documenting eighteen of the fund’s grants—which include projects having to do with diagnosing “what’s wrong” with nonbelievers, the “properties” of God, and critiques of scientific explanations for morality—Tom shows how “by its sheer scale, Templeton’s giving has a potentially pernicious effect on every field it penetrates.”

Also not to be missed is Rebecca Newberger Goldstein’s call for a bond of friendship between science and philosophy, distinguishing philosophy as how we humans “get a handle on who we are.”