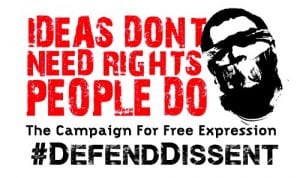 September 30, 2014, was the fifth International Blasphemy Rights Day, launched by CFI to raise the alarm about the global crackdown on free expression, particularly criticism of religion, and to show solidarity with those suffering from persecution for their dissent. It is one day on the calendar that highlights a cause that is at the heart of what we at CFI do 365 days a year.

Heavily citing the work of CFI, Brian Pellot at Religion News Service marks the day with an expression of solidarity with imprisoned Saudi dissident Raif Badawi—soon to face 1,000 lashes and ten years in prison for blasphemy—and stern words for the Saudi government, lamenting that the Kingdom’s “normalized position on the world stage and Raif Badawi’s plight represent the tragedy that can and does ensue when international economic and political considerations overshadow fundamental human rights.”

Our president and CEO, Ron Lindsay, chose this occasion to take stock of the current state of free expression and religious dissent around the world; things are not rosy, but he reminds us of the importance of the cause. “Protecting the fundamental human right to free expression, including the right to express one’s views on religious issues, is an ongoing struggle,” he writes. “Whether this fundamental right will ever gain truly universal recognition remains an open question. What is not in doubt is that if we who support free expression become apathetic about this struggle, the right to free expression will erode. Fanatics never lack for motivation.”

The CFI On Campus blog has been featuring testimonials from student leaders about what free expression means to them personally.

We think Robert Green Ingersoll put it pretty well when he said, “All laws defining and punishing blasphemy … were passed by impudent bigots, and should be at once repealed by honest men. An infinite God ought to be able to protect himself, without going in partnership with State Legislatures.” We’re sharing an image-meme with that very quote for International Blasphemy Rights Day, and you can too, to show your support for free expression.