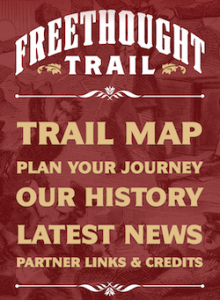 Foundational advancements for progress and equality—secularism and freethought, abolitionism and suffrage, and a wide variety of other radical movements—grew and flourished on the same fertile ground in nineteenth-century West-Central New York State.

Today, the legacies of such transformational American reformers as Susan B. Anthony, Robert Green Ingersoll, Madelyn Joslyn Gage, Elizabeth Cody Stanton, and Fredrick Douglass are honored, and their stories retold, through the sites that make up the Freethought Trail, a project of the Center for Inquiry’s Council for Secular Humanism.

There are of course the real-life sites of the Freethought Trail, the many historical locations throughout West-Central New York such as the Robert Green Ingersoll Birthplace Museum and the Women’s Rights National Historical Park in Seneca Falls. The trail has recently expanded to include more than 115 historical sites. But of course “site” has another meaning as well.

New for 2018, the website of the Freethought Trail has undergone a major overhaul and redesign.

The new Freethought-Trail.org is fresh with gorgeous visuals, simple navigation, and most importantly, a trove of information on the individuals, groups, places, and social movements that made nineteenth-century West-Central New York such a flashpoint of progressivism, radicalism, and reform.

Deeply researched and painstakingly organized, the new Freethought Trail website is a way to delve deeply into another era, to be enlightened by historical scholarship and surprised by the discovery of facts and stories too seldom told.

And there’s a good chance it will inspire a desire to plan a trip up to New York to see these places for yourself. One special opportunity is coming later this year, when the Center for Inquiry holds a conference for the Ingersoll Museum’s Silver Anniversary Celebration, August 18 and 19 in Syracuse, New York.

Redesign of the Freethought Trail website and the design and publication of a companion brochure for distribution at tourist information centers along the New York Thruway were made possible by a generous grant from the James Hervey Johnson Charitable Educational Trust.

The mission of the Council for Secular Humanism is to advocate and defend a nonreligious lifestance rooted in science, naturalistic philosophy, and humanist ethics and to serve and support adherents of that lifestance. The Council publishes FREE INQUIRY Magazine, operates a national network of affiliated local groups, operates the Ingersoll Museum, and undertakes many other programs of importance to nonreligious men and women.

John de Lancie to Secular Graduates: VOTE! The World Needs You to Shape the Future