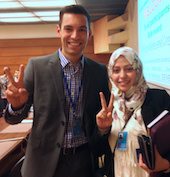 CFI has been working for years now to free Raif Badawi, the Saudi writer who Saudi Arabia sentenced to a decade behind bars and 1,000 lashes for “insulting Islam” and running a liberal website. His case became a global symbol of Saudi Arabia’s abysmal human rights abuses and of the need to repeal blasphemy laws around the world. In 2014, Badawi’s lawyer, human rights activist Waleed Abu al-Khair, was himself arrested and jailed, heightening the urgency and the gravity of this case.

On January 12, the Saudi crackdown on free expression briefly ensnared someone close to Badawi, al-Khair, and the Center for Inquiry. That morning, Samar Badawi, sister of Raif and wife of Waleed, was arrested for allegedly posting from her husband’s Twitter account. At the police station, her small child was taken from her as she was questioned.

As you can imagine, we were outraged. Ms. Badawi has been a close ally of CFI’s in our shared mission to free her brother and defend free expression around the world. In our official statement demanding her release, Michael De Dora, who met Ms. Badawi in 2014 at the UN Human Rights Council and has remained in frequent contact with her, said, “She is one of the most impressive, courageous, and devoted activists I have ever met. She is a shining example of the kind of meaningful impact an individual can have, despite incredible odds and unthinkable oppression. Her detention now speaks to how desperate and inhuman Saudi Arabia has become to intimidate, silence, and punish critics.”

This is an opinion shared by both former Secretary of State Hillary Clinton and First Lady Michelle Obama who honored Ms. Badawi with a Women of Courage award in 2012.

To the best of our knowledge, Samar is thankfully no longer in custody, and we do not know of any additional actions being taken against her. But we will continue to monitor this situation very closely and to do all we can help her husband and her brother win back their freedom.