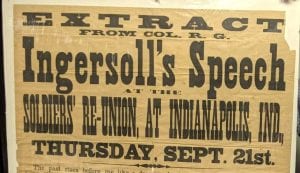 New in the Robert Green Ingersoll Birthplace Museum for 2019 is an 1876 broadside poster excerpting an Ingersoll speech. Almost six feet tall, it’s one of just two known to survive. And it’s proof that “A Vision of War,” perhaps the best-loved single passage in the Ingersoll repertoire, was recognized as special within days or weeks of its delivery. 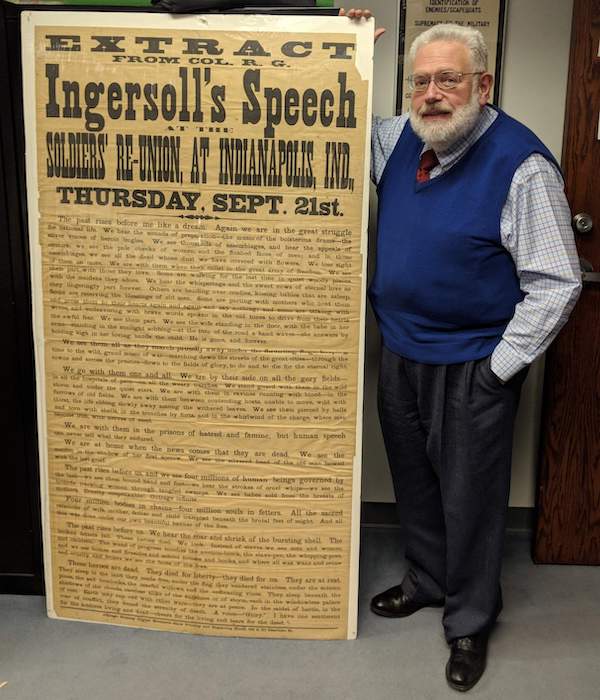 On September 21, 1876, Ingersoll addressed tens of thousands of Civil War veterans at Monument Circle in downtown Indianapolis. Much of his lengthy speech was devoted to political bombast, savaging the Democratic Party (“waving the bloody shirt”) and praising G.O.P. candidate Rutherford B. Hayes. But in one 970-word segment, Ingersoll took a different tack, weaving a lyrical, almost cinematic word-picture that captured the Civil War experience for those who fought and lived, those who fought and died, and for all those left behind at home.

The haunting extract gained fame so quickly that within weeks it was reproduced in this oversized format, to be read on building walls and inside social halls and taverns. Soon afterward named “A Vision of War,” the extract was republished in numerous forms, from a pamphlet to a lavishly illustrated full-color edition with dazzling watercolor images.

“A Vision of War” was considered the foremost literary response to the Civil War, alongside Lincoln’s Gettysburg Address, until the publication of Stephen Crane’s The Red Badge of Courage (1895). Framed in new wood carved in an 1870s pattern, the poster will be added to the James Hervey Johnson Display Room at the front of the Birthplace. This room already contains the 560-pound sandstone bust of Ingersoll, the museum orientation video, and the pianoforte given by the Ingersoll family on the occasion of the museum’s first restoration in 1921. 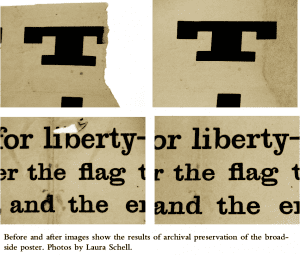 The poster itself is exceptionally rare. Broadside posters of this sort were printed on high-acid pulp paper, which decays quickly unless stored under ideal conditions. It has been professionally preserved and framed using museum-grade materials. Gifted to the Ingersoll Museum in 2018 by Saul Dunn and Susan Starr in honor of their brother William J. Dunn, who loved liberty and freethought, the poster was displayed prior to its preservation at the Ingersoll Museum Silver Anniversary Event in Syracuse, New York, this past August.

It is also one of two original broadside posters now displayed at the Museum, the other being a twenty-eight-inch poster promoting an October 11, 1878, Ingersoll lecture at City Hall in Lawrence, Massachusetts. That poster, the gift of Ingersoll aficionado Al Szczepek, joined the Museum collection in 2008.

The Robert Green Ingersoll Birthplace Museum, operated by CFI’s Council for Secular Humanism, opens for its 2019 season on May 25.