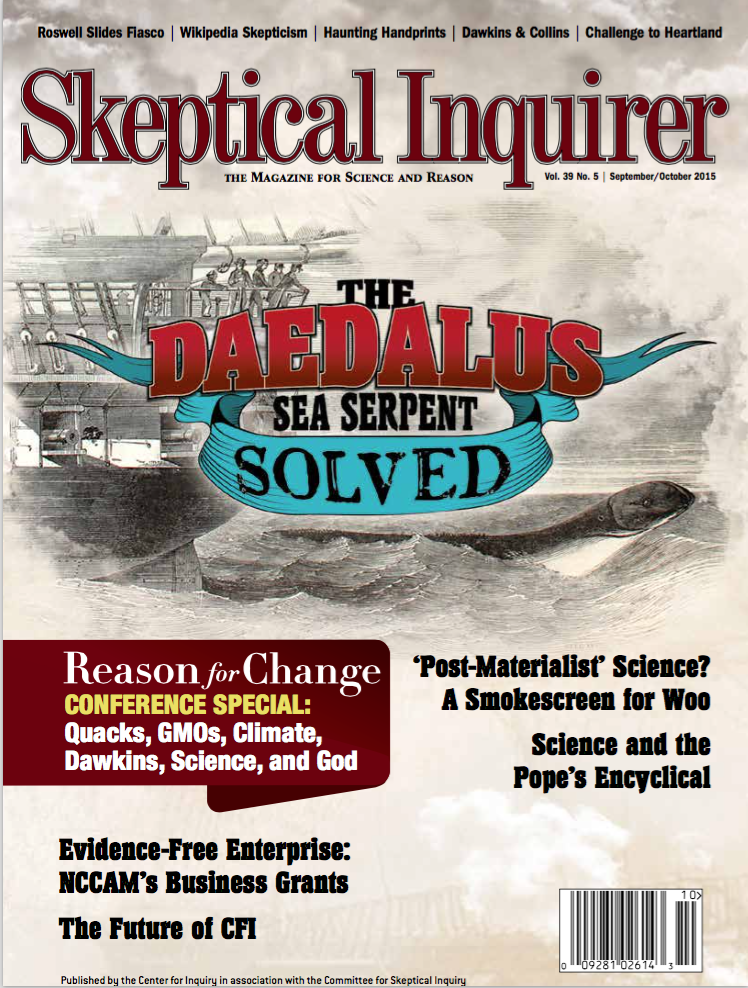 For generations, the mystery of the “sea serpent” witnessed by the captain of the HMS Daedalus in 1848 remained unsolved. But in the latest issue of Skeptical Inquirer, the magazine for science and reason, new evidence points to a definitive answer: No monster or dinosaur, but a particular kind of surface-skimming whale.

In 1848, Captain P. M’Quhae of the HMS Daedalus reported witnessing “an enormous serpent” emerge from the surface of the water and pass close to his vessel. M’Quhae claimed that “the head … was, without any doubt, that of a snake.” His Lieutenant, E.A. Drummond, gave his own account, writing, “The appearance of its head, which, with the back fin, was the only portion of the animal visible, was long, pointed, and flattened at the top, perhaps ten feet in length, the upper jaw projecting considerably.”

The identity of the creature remained unknown until evolutionary biologist Gary J. Galbreath mounted an investigation, publishing his findings in Skeptical Inquirer. Says Galbreath: “There is no doubt that something remarkable passed by that ship on an August afternoon.” But what?

Bringing to bear all that science has learned since the nineteenth century about marine life, along with newly available drawings and accounts, Galbreath is able to determine with near certainty that what the crew of the Daedalus saw was no serpent—indeed, no fish or reptile at all—but a mammal, a sei baleen whale.

“[The crew’s] accounts agree that the animal was swimming along with its head fully out of the water much of the time,” writes Galbreath. The behavior happens to be consistent with the feeding behavior of sei whales, whose lower jaws remain submerged as they skim small organisms from the surface of the water, the flat triangular tops of their heads resembling something like a serpent jutting from the water.

Also in the September/October 2015 issue of Skeptical Inquirer:
Center for Inquiry President Ronald A. Lindsay argues for the ongoing need for the advocacy of critical thinking well into the future;  Kendrick Frazier and Kenneth R. Miller evaluate Pope Francis’s encyclical on climate change from the skeptic’s perspective; Sadri Hassani dispels the claims to scientific “maverick-hood” made by the purveyors of pseudoscience; and much more!

Skeptical Inquirer is available on newsstands, in the Apple App Store, or on Pocketmags for Android, Kindle, and other platforms. For more information, visit http://www.csicop.org/si.