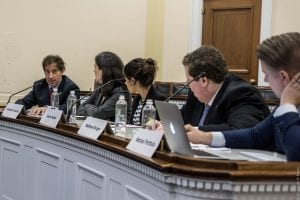 October was another busy month for CFI’s Office of Public Policy (OPP).

On October 5th, we sent an action alert reminding supporters of their final chance to tell the Senate to reject Brett Kavanaugh’s nomination to the Supreme Court. Previously, OPP raised the alarm about Kavanaugh’s support for Christian privilege. Although Kavanaugh was ultimately confirmed, we are enormously grateful to all of you who spoke up for the separation of church and state by calling and writing your senators.

While most of CFI’s staff was busy making this year’s CSICon another smashing success, OPP spent the first couple weeks of October co-hosting a pair of briefings, one in the House on October 9th and another in the Senate on October 16th, exploring the global impact of blasphemy laws with the Secular Coalition for America and the American Humanist Association. CFI President and CEO Robyn Blumner joined as a panelist in our Senate briefing. In addition to representing the atheist community, Robyn touted CFI’s Secular Rescue program.

The briefings were an opportunity to educate members of Congress about House Resolution 349 and Senate Resolution 647, two non-binding resolutions that encourage the Department of State to work to overturn criminal blasphemy laws in the countries that maintain them. In recent years, atheists and secularists have been persecuted and killed under the influence of these laws.

Representative Jamie Raskin (D-MD) delivered remarks at the House briefing before graciously staying to answer questions from the audience.

Both panels were truly diverse, reflecting the unfortunate reality that blasphemy laws are used to oppress people of many different religious affiliations. Our full list of speakers and panelists includes Knox Thames of the Department of State, Elizabeth Cassidy of the United States Commission on International Religious Freedom, Matthew Bulger of the American Humanist Association, Sarah Haider of Ex-Muslims of North America, Matias Perttula of International Christian Concern, Jay Kansara of the Hindu American Foundation, Amjad Mahmood Khan of Ahmadiyya Muslim Community USA, and Jennifer Hawks of the Baptist Join Committee for Religious Liberty. Both panels were moderated by Larry Decker of the Secular Coalition for America. We thank them all for sharing their insights.

And thanks so much to our congressional sponsors Representative Jamie Raskin (D-MD), Senator James Lankford (R-OK), and Senator Christopher Coons (D-DE) for their leadership on this important issue. Without them, these briefings would not have been possible.

On October 11th, OPP sent an action alert inviting our supporters to submit a public comment to the Internal Revenue Service in support of a proposed rule to close a loophole that allows wealthy taxpayers to profit from donations to state school voucher programs. We also submitted a comment on behalf of CFI. The taxpayer money diverted by school vouchers overwhelmingly goes to funding religious schools. Public dollars should stay in public schools! If you’re interested, here’s our press release.

On October 22nd, OPP submitted a public comment supporting a Federal Trade Commission proposal to take action against a Colorado company that marketed fake cancer treatments. We argued that A&O Enterprises demonstrably endangered the health and safety of its consumers, and we urged the FTC to seek monetary restitution for the victims of this fraud.

On October 24th, we sent a thank you note to our Arizona supporters for making their voices heard. Their comments helped convince the Arizona State Board of Education to keep evolution in the state’s science curriculum.

Finally, we condemned a string of actions by the religious right and the Trump administration to impose Christian privilege:

In closing, please join us in voting and encouraging others to vote in the November 6 elections. This year, it’s not an overstatement to say that science-based policy and the separation of church and state need our democratic input to survive.