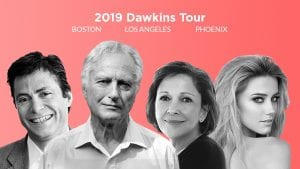 World renowned author and scientist Richard Dawkins, whose passion for the wonders of science and the vital importance of reason has inspired millions of admirers, will share his wisdom and insight with live events in three U.S. cities in October. Dawkins, the bestselling author of such landmark books as The Selfish Gene and The God Delusion, will be joined on stage by some truly remarkable special guests.

CFI Members at the Planet Level or above get early access and 10% off their purchase!

“An Evening with Richard Dawkins,” presented by the Center for Inquiry, will feature Prof. Dawkins taking part in unscripted conversation with distinguished guests, tackling a wide variety of compelling topics spanning science, religion, and more.

Prof. Dawkins comes to Somerville Theatre, joined by M.I.T. physicist and cosmologist Max Tegmark, author of Life 3.0: Being Human in the Age of Artificial Intelligence and co-founder of the Future of Life Institute. Buy tickets.

Actress, activist, and outspoken atheist Amber Heard, critically acclaimed star of films such as Aquaman, Justice League, Her Smell, and Friday Night Lights, will join Prof. Dawkins at the Ikeda Theater. She has served as a Human Rights Champion at the United Nations Human Rights Office and worked with organizations such as the American Civil Liberties Union, the Syrian American Medical Society, Amnesty International, Smile Train, and Planned Parenthood. Buy tickets.

At the Alex Theatre, Prof. Dawkins will be in conversation with Ann Druyan, co-creator, writer, and producer of the Cosmos television series (the first of which was in collaboration with her late husband Carl Sagan) and creative director for NASA’s Voyager Interstellar Message Project. Druyan and Dawkins will be hosted by moderator Kendrick Frazier, editor of Skeptical Inquirer magazine. Buy tickets.

At a time when irrationality runs rampant, the fundamentals of science are being denied at the highest levels of power, and “alternative facts” saturate mass media, there has never been a greater need for Dawkins’ approach to forthright, enlightened discourse.