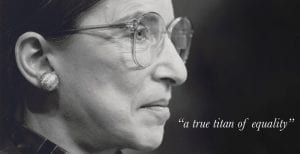 The death of Justice Ruth Bader Ginsburg is a painful blow, particularly for those whose rights she so steadfastly and eloquently defended—and this very much includes the United States’ rapidly-growing nonreligious population. For her entire career, Ginsburg championed equality and religious neutrality, and exposed discrimination and Christian privilege for the injustices they are.

Everyone at CFI is simultaneously processing the impact of the loss of Justice Ginsburg, and girding for the titanic political battle ahead. With a Supreme Court vacancy this consequential occuring a mere six weeks before a presidential election, there is not a moment to lose.

But we must take time to reflect. We wanted to share a piece written by Nicholas Little, CFI’s Vice President and Legal Counsel, on the legacy of Justice Ginsburg and what she meant to our community. Nick writes:

For issues at the core of our mission here at the Center for Inquiry, Justice Ruth Bader Ginsburg was more than a reliable vote, she was an active supporter. She stood four-square for the First Amendment, for the defense of speech and real religious freedom, and for the clear and inviolable separation of church and state. When the majority of the Supreme Court lurched to the right, permitting religious exemptions that would harm innocent parties, the Notorious RBG held firm in her belief that justice demands that a person’s faith cannot be a justification for hurting others.

You can read the piece in its entirety at the CFI website.

The fight of a lifetime is before us. It’ll take every one of us to stand and be counted. We know we can count on your support.

Kill All the Birds!