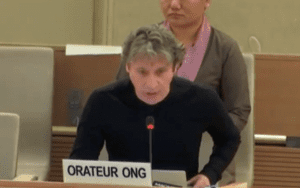 On March 3 and 9, the Center for Inquiry’s United Nations Advocate, Andreas Kyriacou, delivered statements to the UN Human Rights Council. There, he called for the Special Rapporteur on Freedom of Religion or Belief to bring the “necessary vigor” to addressing the persecution of nonbelievers and secularists around the world, and urged the Council to put pressure on the Iranian regime as it “continues to unashamedly violate human rights in all areas.”

Video and text of Andreas’s statements are below.

Dialogue with the SR on Freedom of Religion or Belief

We thank the Special Rapporteur for his report on the global state of the freedom of religion or belief. We share his concern that this freedom continues to be severely violated by many countries. And we agree with his analysis that girls, women and LGBT persons are systematically disadvantaged by religious rulings, which are often encoded in state legislation such as family law. In many countries with alarming conditions these laws are defended by and fought for by fundamentalist Islamic groups, but in countries like Uganda and Poland Christian fundamentalists are the perpetrators, as the Special Rapporteur rightly points out.

A second area where religiously motivated legislation oppresses and threatens members of the respective societies is briefly mentioned by the Rapporteur in his considerations, but not further addressed in his analyses of specific regions: the mistreatment of nonbelievers and especially of outspoken atheists as well as proponents of a separation of State and religious entities. Such individuals continue to be unfairly prosecuted by numerous countries or are not sufficiently protected by authorities from attacks by religious terrorist groups. This is predominantly the case in countries with Sharia-based legislation. We ask the Rapporteur to address this gross and unacceptable violation of human rights in upcoming reports with the necessary vigour.

Dialogue with the SR on Iran

The Special Rapporteur’s Report on Iran shows that the Iranian Regime continues to unashamedly violate human rights in all areas.

We thank the Rapporteur for mentioning the exceptionally hideous case of Saba Kord Afshari.

This 20 year old student was arrested because she had protested against the unaffordable living costs for ordinary citizens, raised awareness about political prisoners and made a short video of herself not wearing the hijab. Like many other Iranian women, Kord Afshari does not want to act as a poster girl for Islamist doctrine and therefore opposes the obligation to cover her hair.

Last year, Saba Kord Afshari was arrested for her civic activities and given a grotesque 24-year sentence. Last month her mother, Raheleh Ahmadi, was also sentenced to four years in prison after making a video to raise awareness about the farcical trial against her daughter. Like many other feminists, secularists, humanists and other human rights campaigners, these two brave women are political prisoners and should be freed immediately.

We urge the Special Rapporteur and the HRC delegates to pressure the Iranian Regime to implement the changes specified by the Secretary-General. Human Rights are universal and, like all countries, Iran is obligated to respect and enforce them.