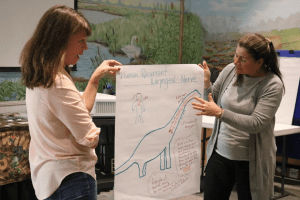 The Teacher Institute for Evolutionary Science (TIES), a program of the Richard Dawkins Foundation for Reason & Science, gives middle school teachers the tools they need to effectively teach evolution and answer its critics.

TIES is closing out another successful year. Five new TIES workshops have been added since our last update, and in the last two weeks TIES has held workshops in Vermont, Delaware, Florida, Utah, Alaska, and Hawaii (TIES state number 50). This month TIES will hold workshops in Colorado, Louisiana, Texas, Virginia, and North Carolina, along with our second annual full-day event at the Birmingham Zoo in Alabama.

In Delaware, TIES held a full-day event at the Brandywine Zoo with the wonderful Dr. Nathan Lents, author of Human Errors: A Panorama of Our Glitches, from Pointless Bones to Broken Genes, joining us as our guest speaker. The teachers learned how the history of human evolution is a collection of mistakes, each more entertaining and enlightening than the last. One teacher commented, “Finally! A workshop with resources I can actually use.”

Unfortunately, TIES received its very first negative review from a teacher last week. It came in the form of an email stating, “I was disappointed by the resources shared… There is evidence that dinosaurs lived with humans; it is not a myth, but a reasonable conjecture. There are pictures on rock faces that show humans and dinosaurs together. There are also carvings that look remarkably like Stegosauruses. Accurate representations of organisms by humans is most likely because they were actually seen.”

I guess we can’t win ‘em all. But don’t worry, this just gives us more incentive to keep doing what we are doing!

An Immense Amount of Ignorant Familiarity