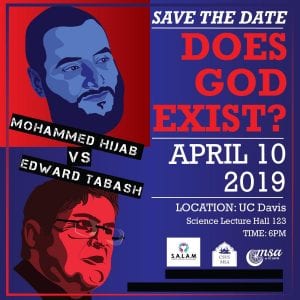 Eddie Tabash is not only chair of the Center for Inquiry, an accomplished attorney, and one of the most prominent and respected freethought advocates to ever bolster the Wall of Separation, he’s also a skilled and popular debater, taking on believers of all stripes who wish to engage in an intellectual exchange over questions of religion and society.

Last week, Eddie went to the University of California-Davis to debate the existence of God with Mohammed Hijab in an event hosted by the school’s Muslim Student Association. The entire debate was streamed live and you can watch it now.

Here’s an example of Eddie’s sharp thinking in real time, rebutting the idea that the Universe’s existence is “contingent” on a creator bringing it into being:

Told you he was good. Watch the full debate and the subsequent Q&A session below.