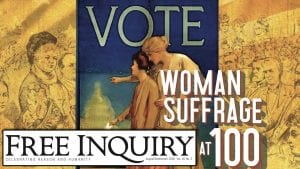 Free Inquiry magazine commemorates the 100th anniversary of woman suffrage with a special issue on the legacy of the activists who fought for change, the role of religion in resisting women’s equality, and how the suffragists’ victory paved the way for the advancement of American secularism.

God and Woman Suffrage: Historian Sue Boland looks at how the most fervent opposition to women’s rights came from clergy railing against women who had “stepped out of their domestic sphere.” Boland says the suffragists’ internal debates over religion are critical to understanding the movement, particularly that of Matilda Joslyn Gage, who is often overlooked in favor of better-known figures such as Susan B. Anthony and Elizabeth Cady Stanton. “When religion is taken out of the story of suffrage, one inevitable result is that Gage’s importance is ignored or downplayed.”

New York State as a Hotbed of Reform: Historian Judith Wellman looks at the suffragist movement through the lens of place. “Spaces that survive into the present act as bridges across time,” she writes of the movement’s historical sites in Upstate New York. “They allow us to travel through time as well as through space, to inhabit past times while we remain in present spaces.”

The Forgotten Milestone: As the centenary of woman suffrage arrives at a time of social upheaval, Free Inquiry Editor Tom Flynn encourages a critical review of the movement that acknowledges its shortcomings as well as celebrates its world-changing achievements. “Let the historical record be viewed unstintingly,” he writes, noting that the suffragists’ victory laid the groundwork for justice movements to come, bringing “a deeply secularizing change to American life.”

Also in the August-September issue of Free Inquiry:

Free Inquiry is available in both print and digital subscriptions.

All the Properties of a Parasitic Virus